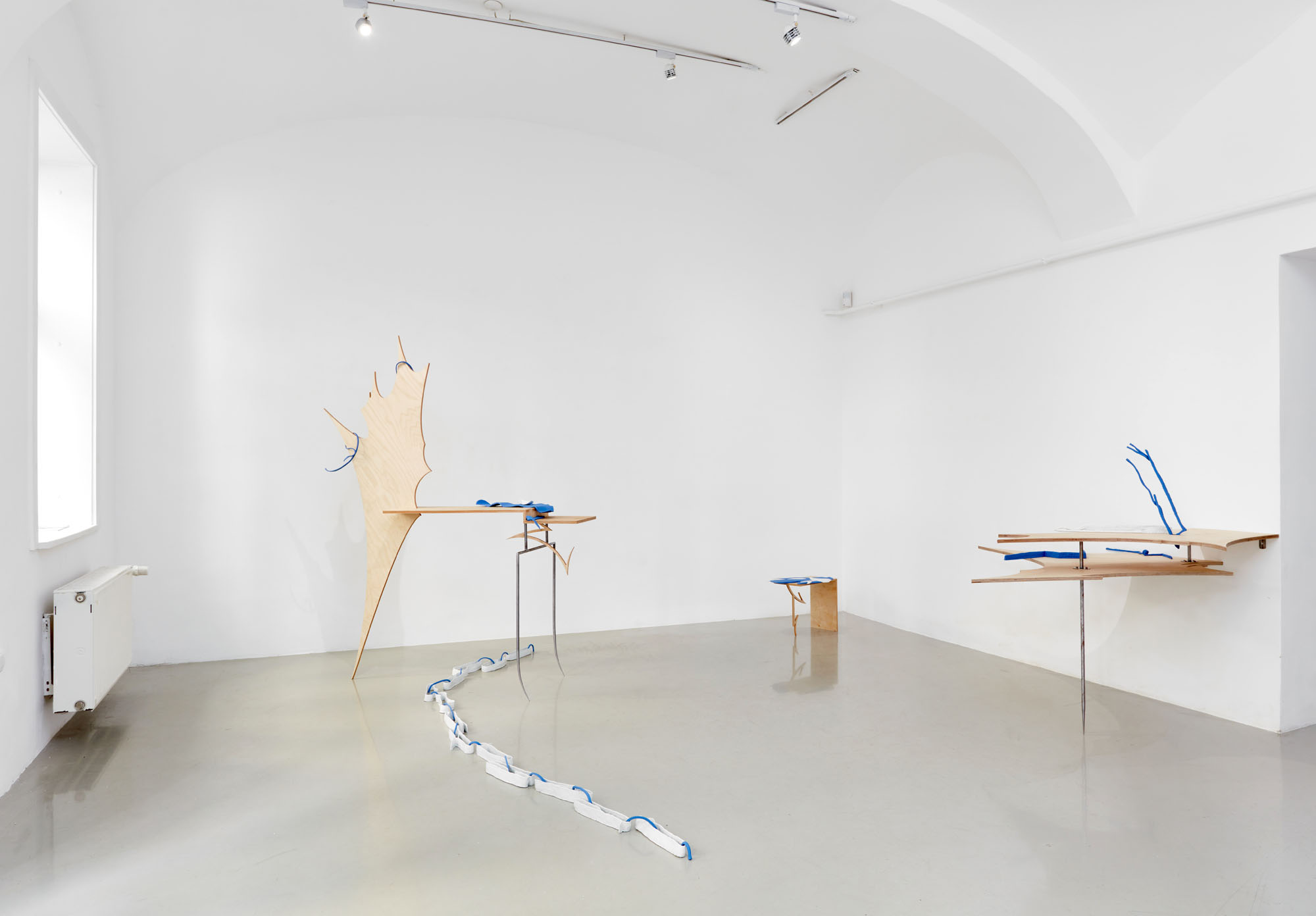 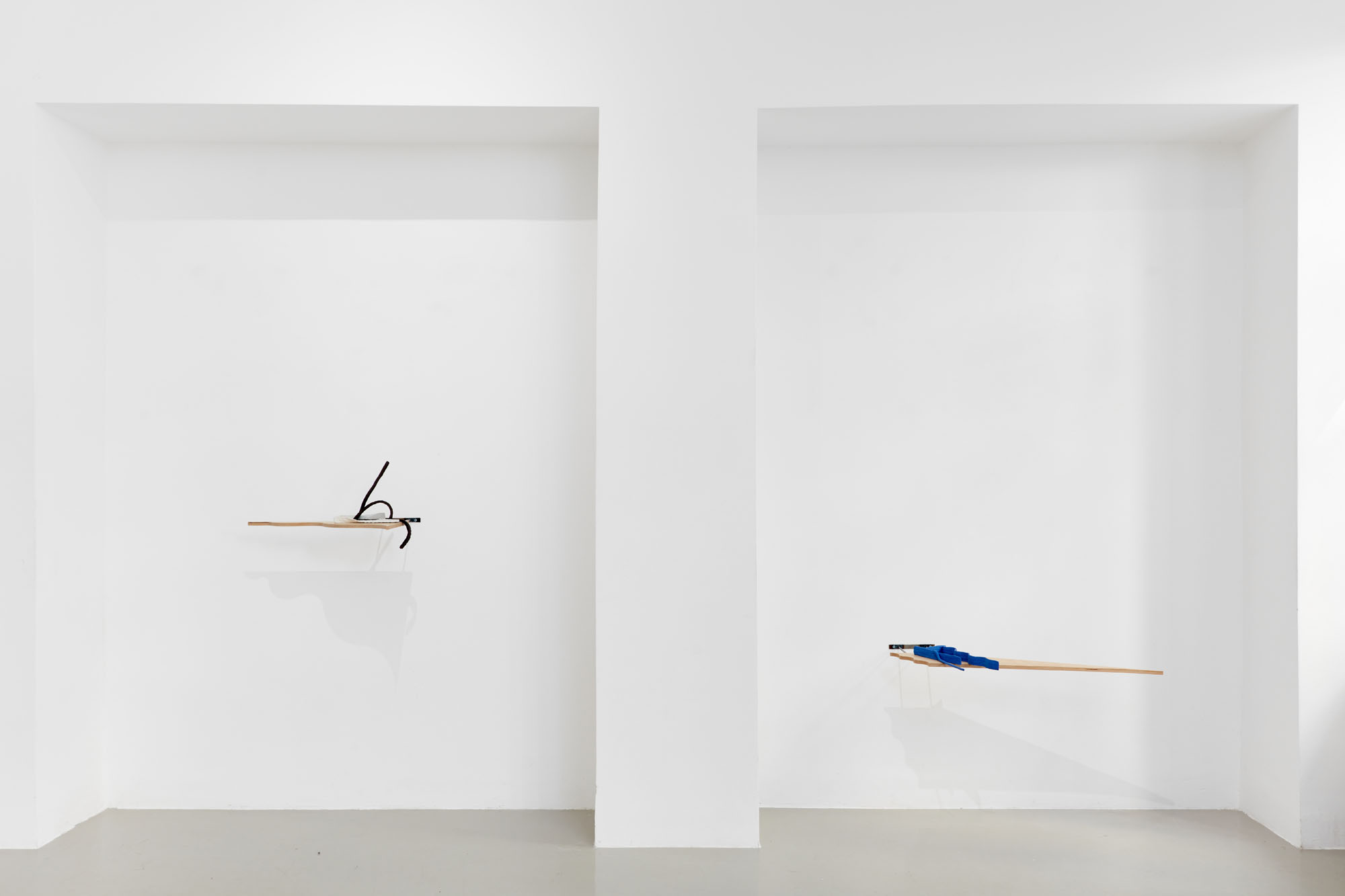 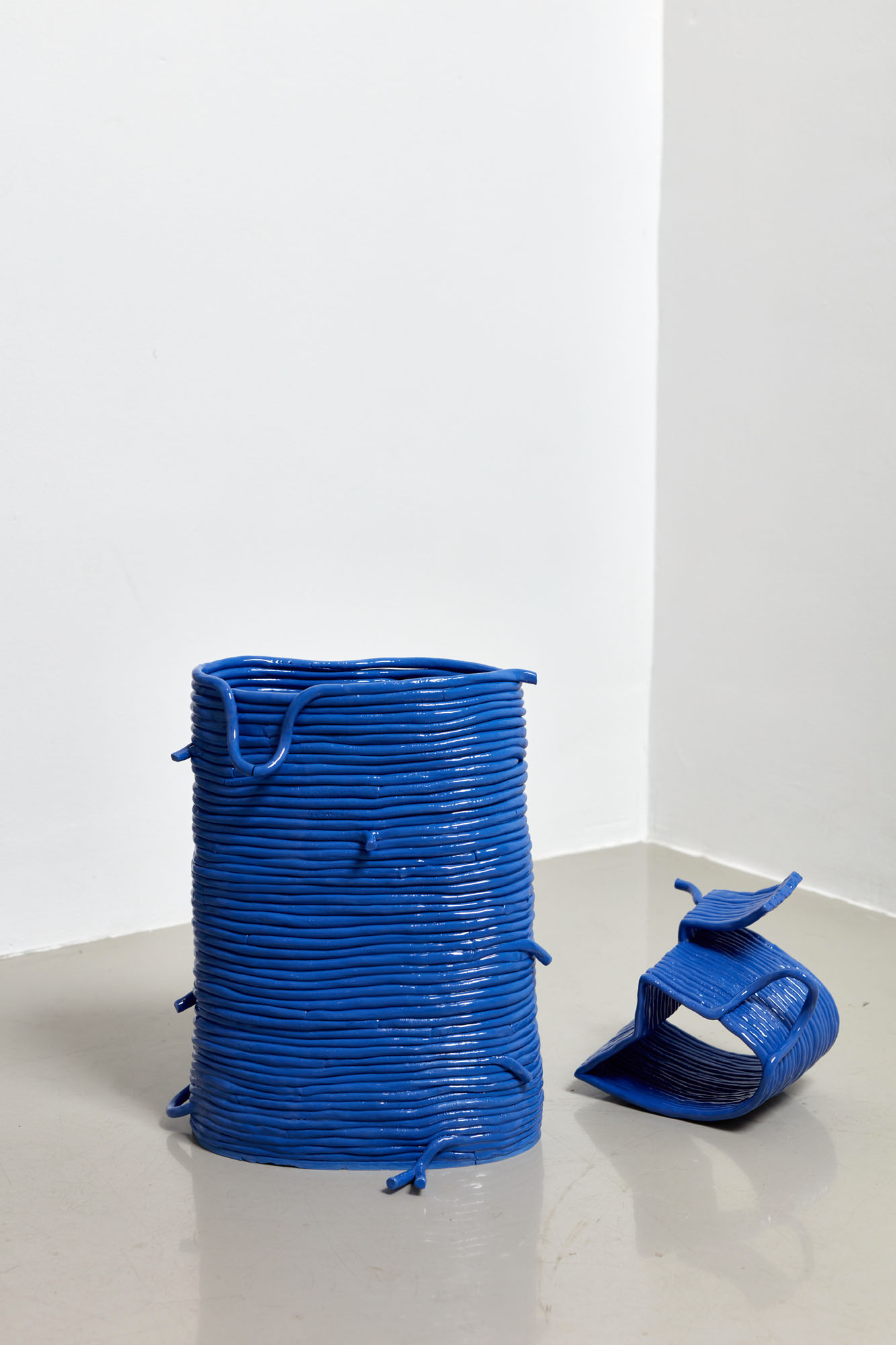 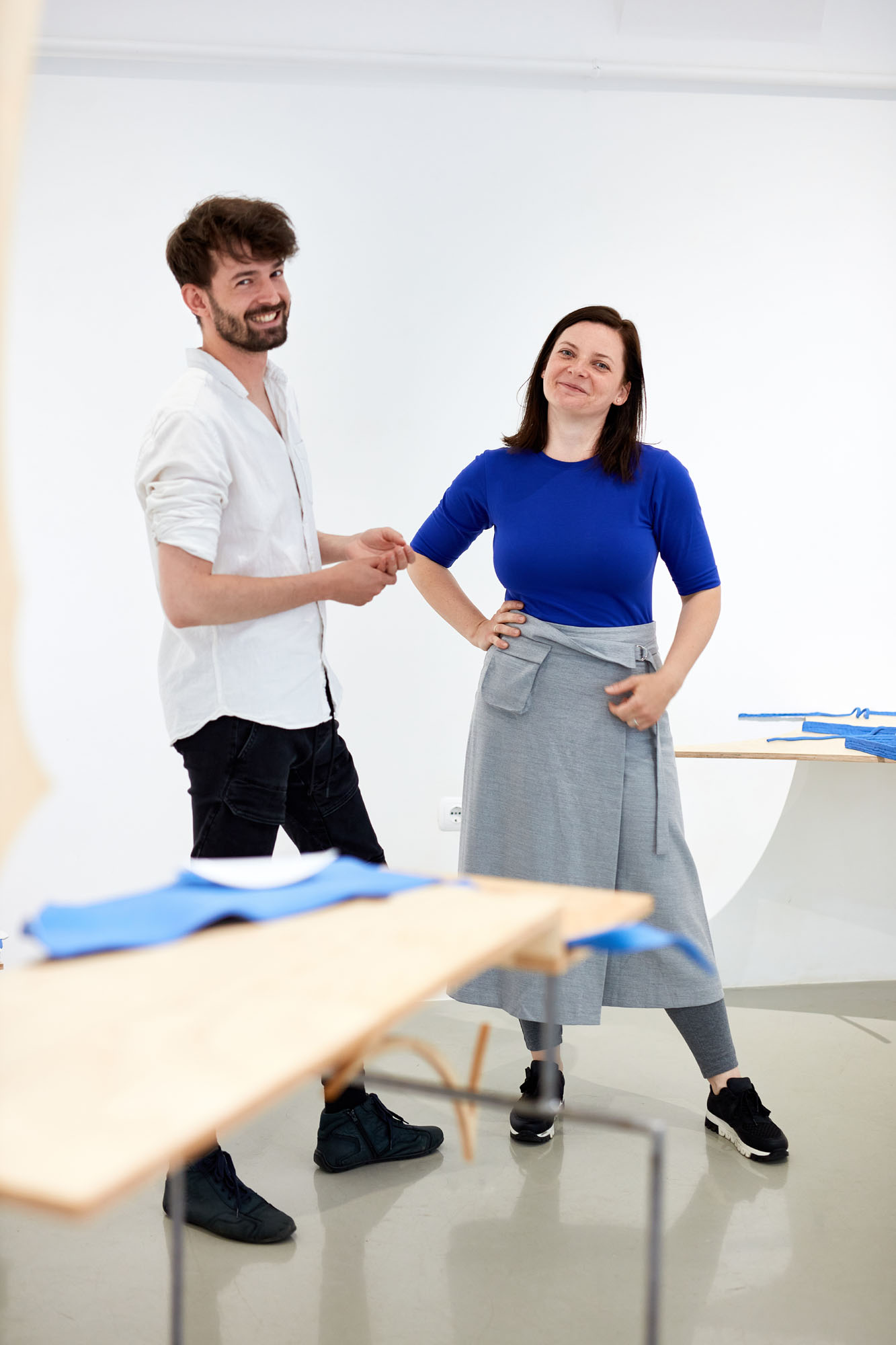 Zsolt Molnár’s exhibition „Along the Edge of the Leaf” concentrates on different response mechanisms. In his new series, besides the question of vulnerability, he deals with response mechanisms that constitute vital parts of our ecological systems. While in his earlier works he studied the presence of the artificial effecting natural environments, this time he focuses on organic phenomena in nature.

(A foreword to the exhibitions of Zsolt Molnár and Tünde Ruzicska)

“as beautiful as the chance encounter of a sewing machine and an umbrella on an operating table.”
(Lautréamont: The Songs of Maldoror, 274.)

I rarely give titles to opening speeches, but this time I felt it was important to summarize my thoughts, or rather, the way I am thinking about the two exhibitions about to be opened.

I also do not usually use mottos before texts, but this sentence by the Count of Lautréamont – Isidore Ducasse –, one that was picked up by the Surrealists and made to be the groundwork of their aesthetics, became one of the most important theoretical sentences of 20th-century art.

This sentence places beauty, the artwork, and art itself outside the realm of predictable effects, and into the terrain of chance, of the uncontrollable, of the accidental.

The accidental meeting of things might resonate with us, it might not; but if it touches us, it will be beyond what is explicable.

****
I could of course update Lautréamont’s bon mot:

For example, I could translate it like this: The chance encounter of a graphic designer and a ceramic artist in AQB (Art Quarter Budapest).

Perhaps: The rendezvous of plywood and porcelain elements in Kisterem. Or: From caterpillars to chawans and back
Organisms and diagrams
Abstract soils – the reign of fertile abstraction

On the other hand: story and structure

It is clear: We are dealing with a peculiar collage, with the juxtaposition of elements that otherwise do not belong together, with something that is part conscious, part instinctive, part coincidence.

Originally, I wanted to entitle this short opening as “The chance encounter of Dezső Korniss and Kurt Schwitters in Képíró Street”:

The legs of Zsolt Molnár’s objects, especially the metal legs, and his curious carvings that pierce through the plane – and all in all, the evocation of a reptilian nature is a distant, perhaps not even conscious reminiscence of Tücsöklakodalom by Korniss, one that is amplified by the tangling vines of Tünde Ruzicska.

The spaces of Kisterem, in this sense, that they are building and dwelling in, could be Kurt Schwitter’s Merzbau in its initial phase, but optimized for the 2020s.

Because the geometric concupiscence, medial promiscuity that characterizes the work of Zsolt and Tünde is airy in a way that is specific of Korniss, but hardly of Schwitters.

So I originally planned to give the title “The chance encounter of Dezső Korniss and Kurt Schwitters in Képíró Street”, this turned into Chance Rendezvous: a kind of rendezvous (which is a conscious invitation to a meeting), which is somehow still accidental––

For the meeting of Korniss and Schwitters is broadened in such a way that I had to rethink the title:

I accidentally went to the theatre yesterday and saw a monodrama version of Marcel Proust’s In Search of Lost Time. There is a longer passage with observations that intertwine things akin to what Zsolt Molnár and Tünde Ruzicska are showing us:

“After waiting a minute, I would go in and kiss her; Françoise would be making her tea; or, if my aunt felt agitated, she would ask instead for her tisane, and it would be my duty to shake out of the chemist’s little package on to a plate the amount of lime- blossom required for infusion in boiling water. The drying of the stems had twisted them into a fantastic trellis, in the interlacings of which the pale flowers opened, as though a painter had arranged them there, grouping them in the most decorative poses. The leaves, having lost or altered their original appearance, resembled the most disparate things, the transparent wing of a fly, the blank side of a label, the petal of a rose, which had all been piled together, pounded or interwoven like the materials for a nest. A thousand trifling little details—a charming prodigality on the part of the chemist—details which would have been eliminated from an artificial preparation, gave me, like a book in which one reads with astonished delight the name of a person one knows, the pleasure of finding that these were sprigs of real lime-trees, like those I had seen, when coming from the train, in the Avenue de la Gare, altered indeed, precisely because they were not imitations but themselves, and because they had aged. And as each new character is merely a metamorphosis from

something earlier, in these little grey balls I recognised green buds plucked before their time; but beyond all else the rosy, lunar, tender gleam that lit up the blossoms among the frail forest of stems from which they hung like little golden roses— marking, as the glow upon an old wall still marks the place of a vanished fresco, the difference between those parts of the tree which had and those which had not been “in colour”—showed me that these were indeed petals which, before filling the chemist’s bag with their spring fragrance, had perfumed the evening air. That rosy candleglow was still their colour, but half-extinguished and deadened in the diminished life which was now theirs, and which may be called the twilight of a flower. Presently my aunt would dip a little madeleine in the boiling infusion, whose taste of dead leaves or faded blossom she so relished, and hand me a piece when it was sufficiently soft.” (Marcel Proust: In Search of Lost Time, Volume I., Swann’s Way, translated by C. K. Scott Moncrieff and Terence Kilmartin)

These sentences speak of the exaltation of the order of the accidental, as well as of tea of course, of dried lime blossom, of transforming blossoms, of imitation and the genuine, of memory and reality.

Of a chance rendezvous.