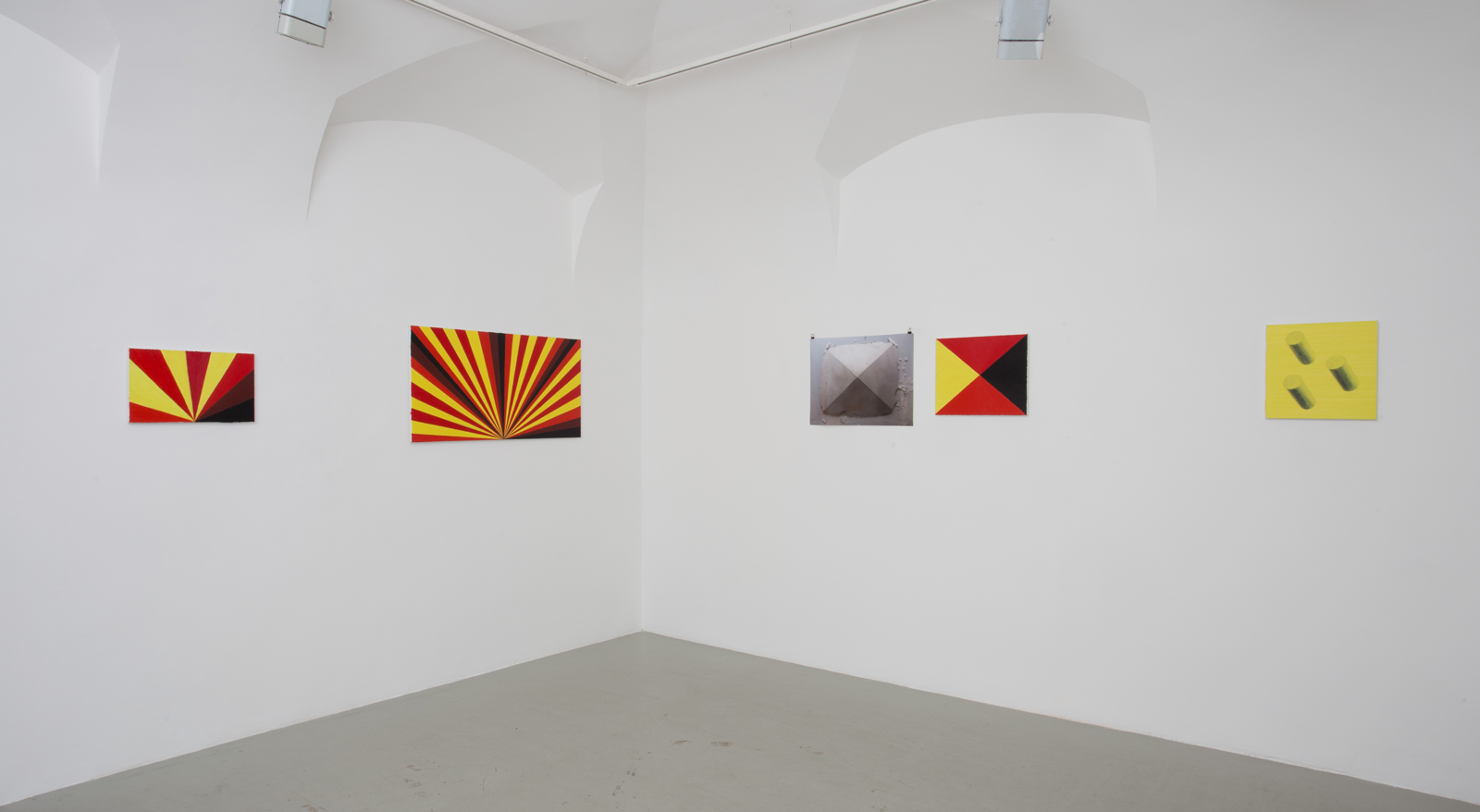 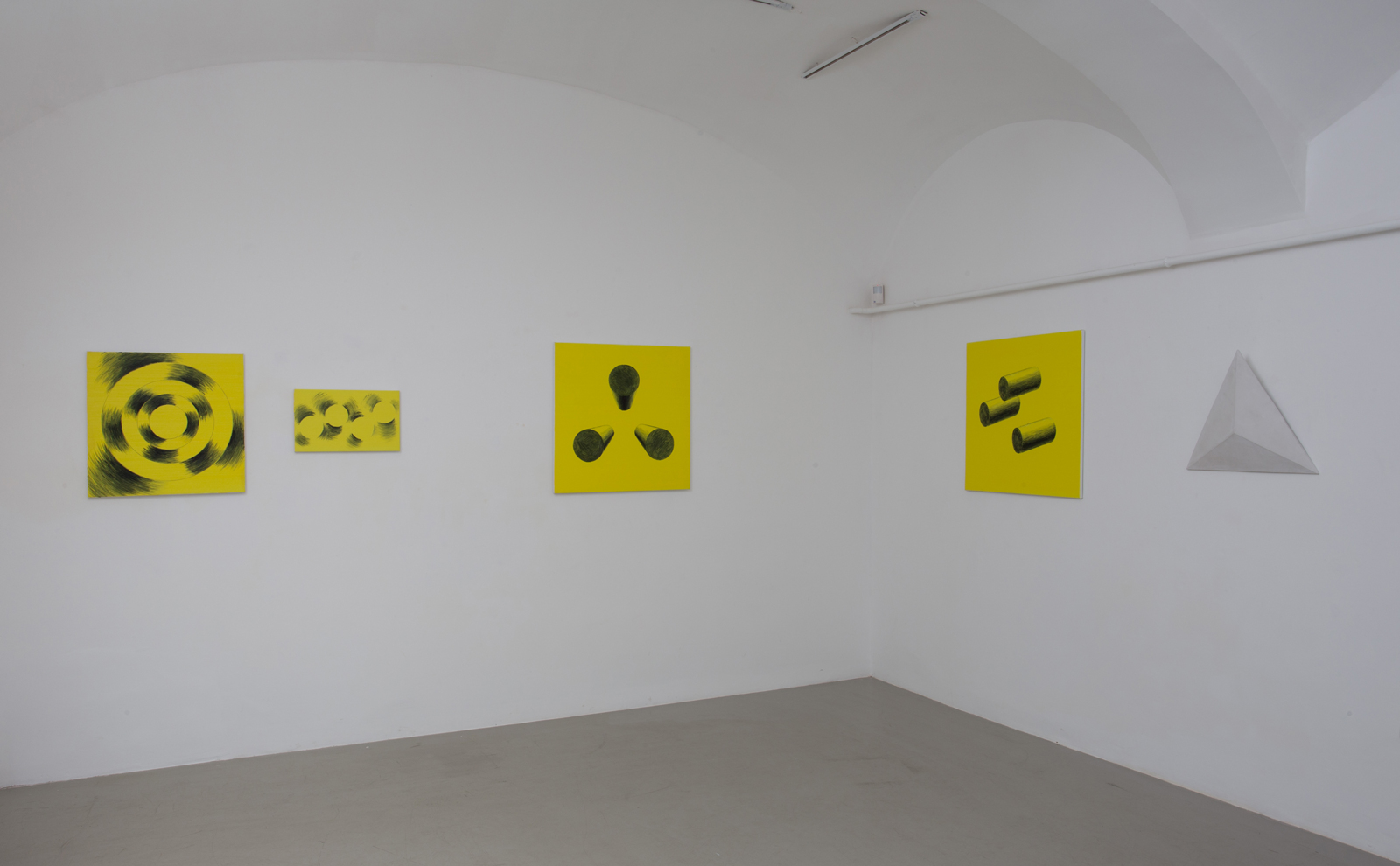 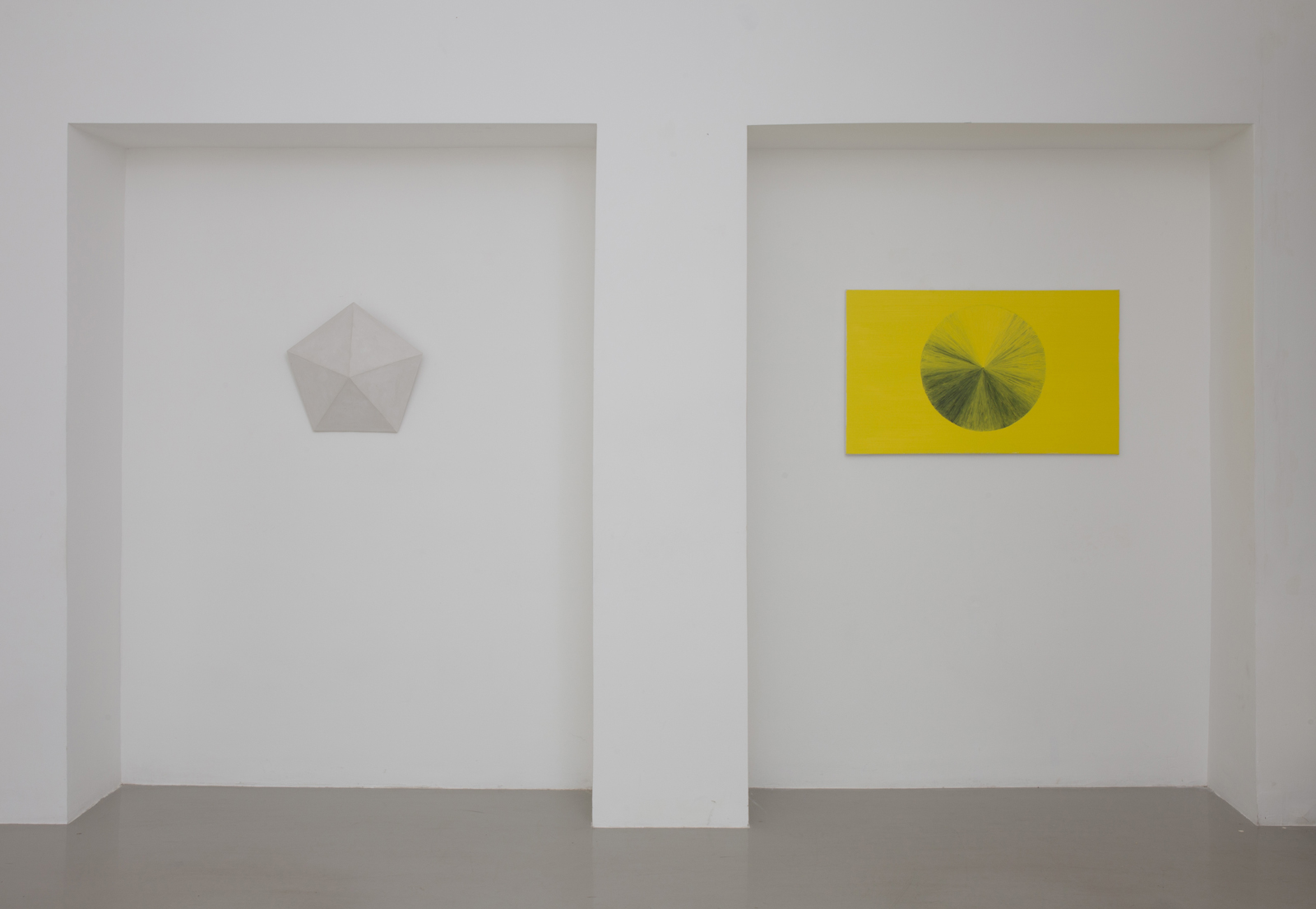 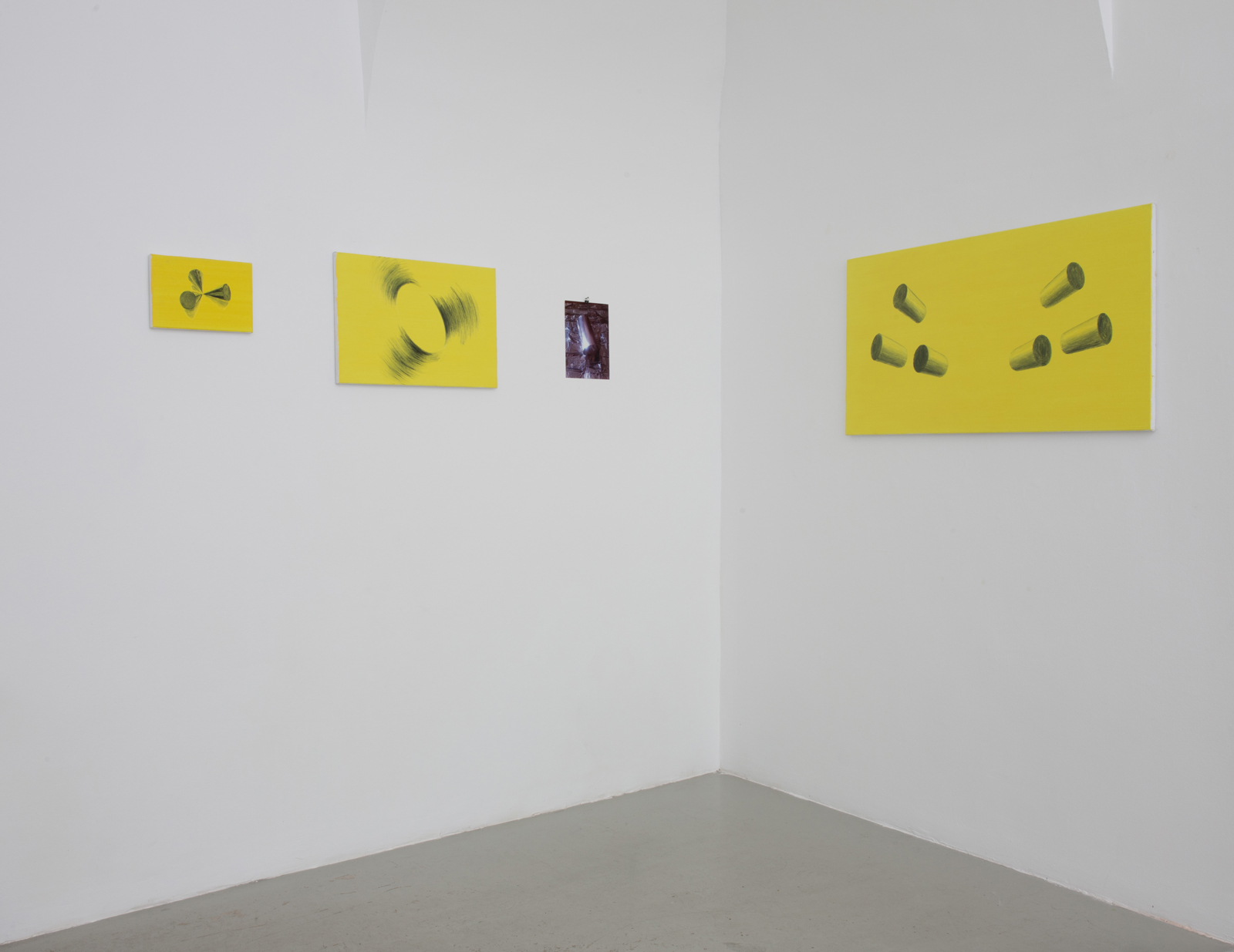 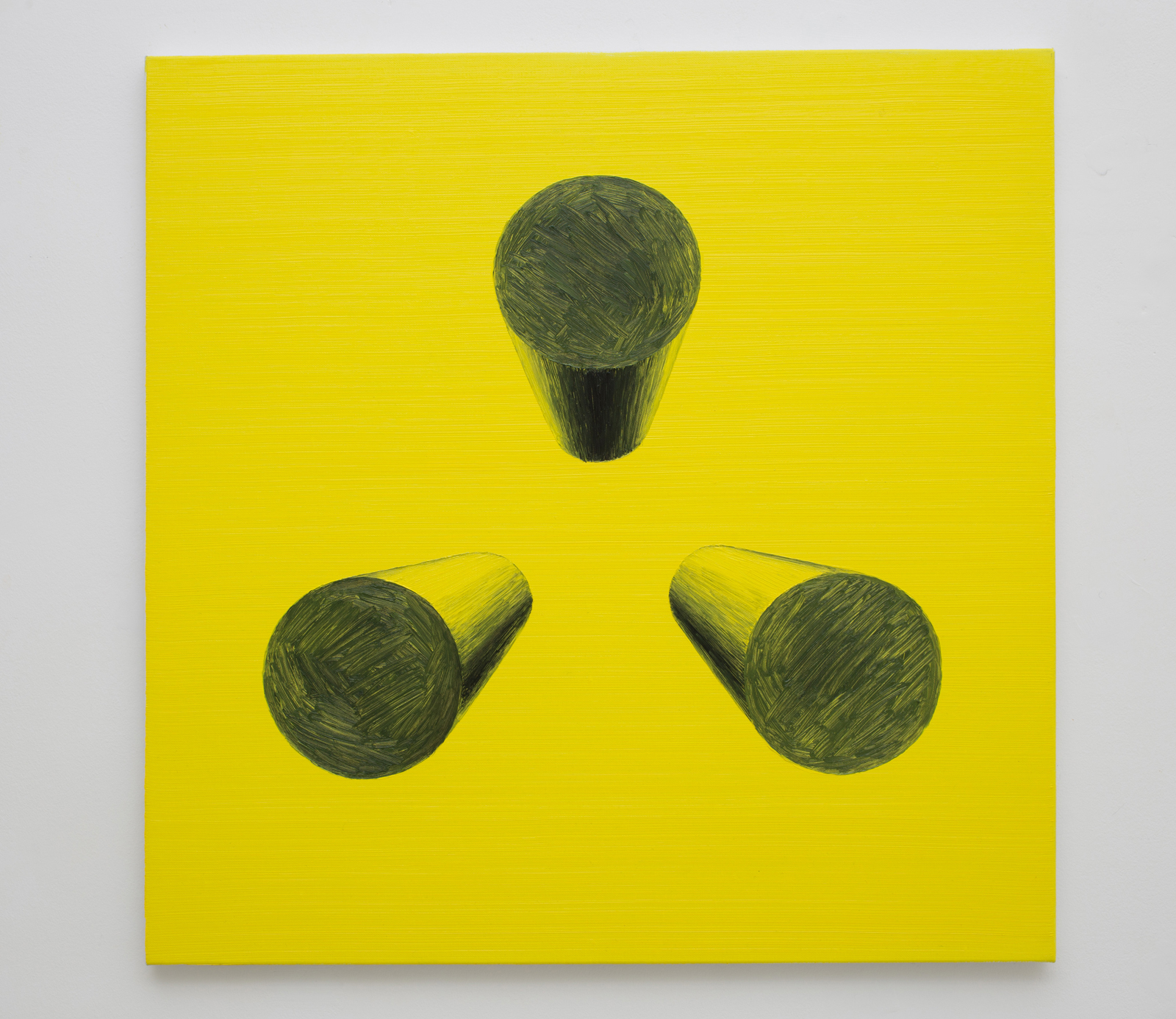 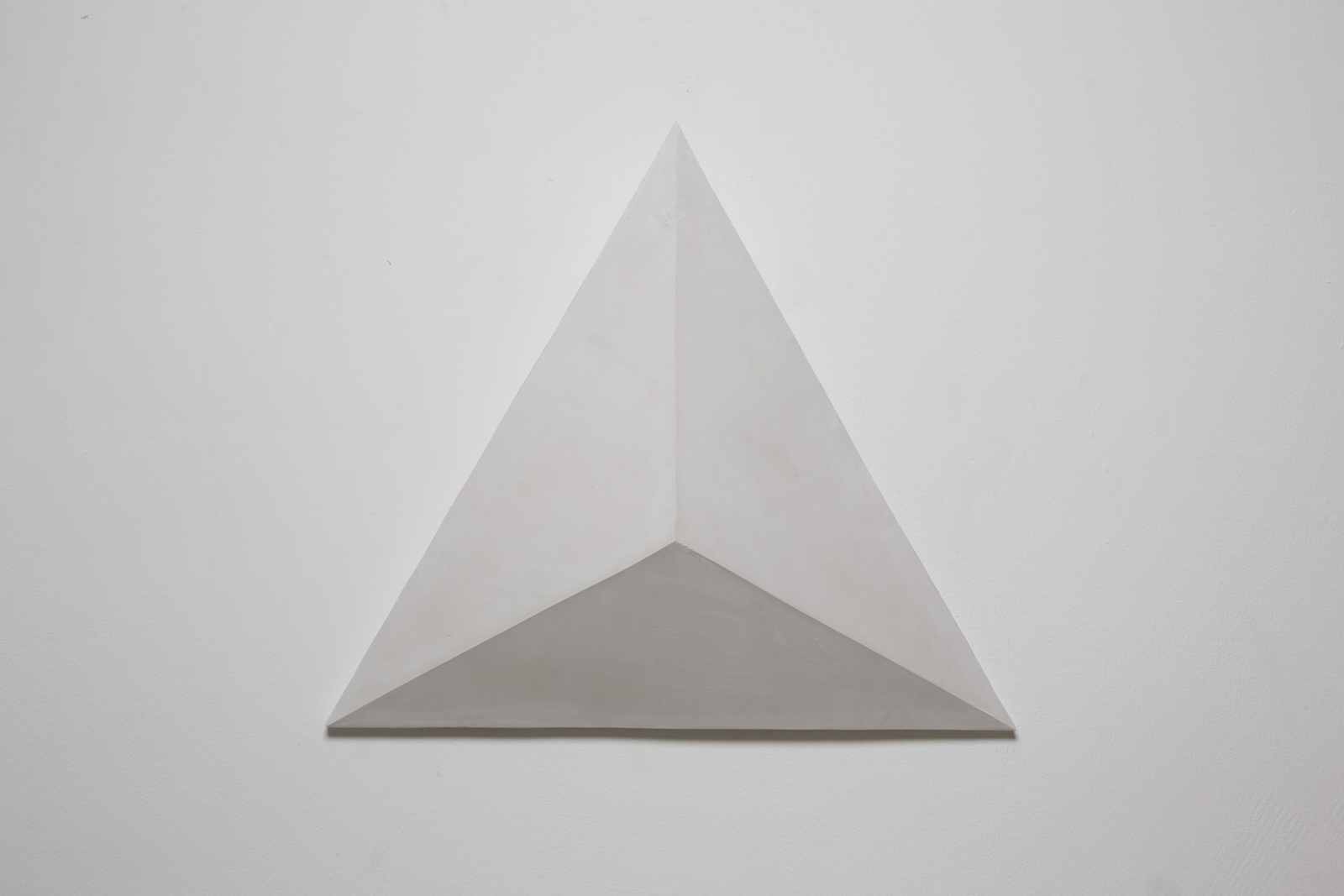 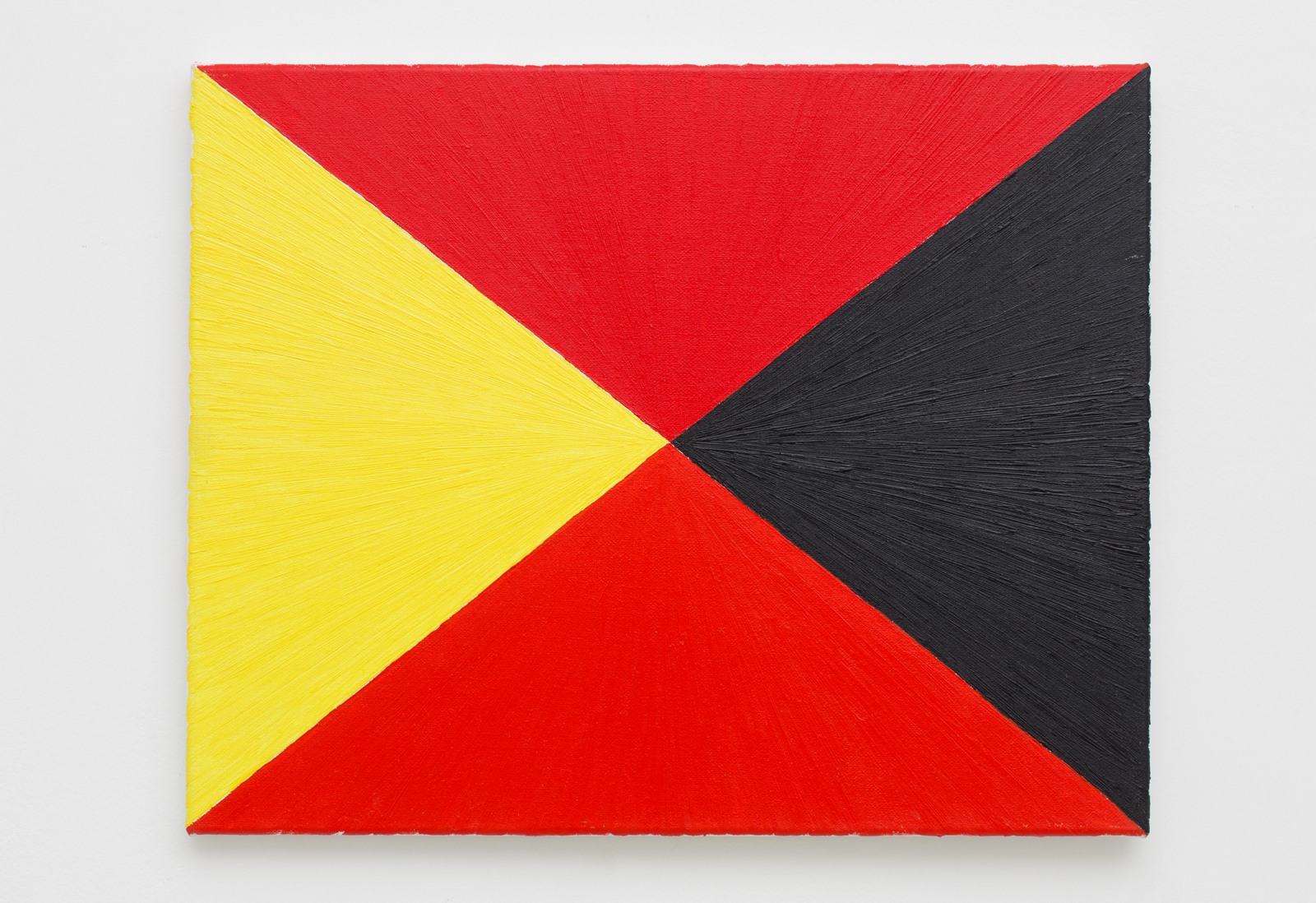 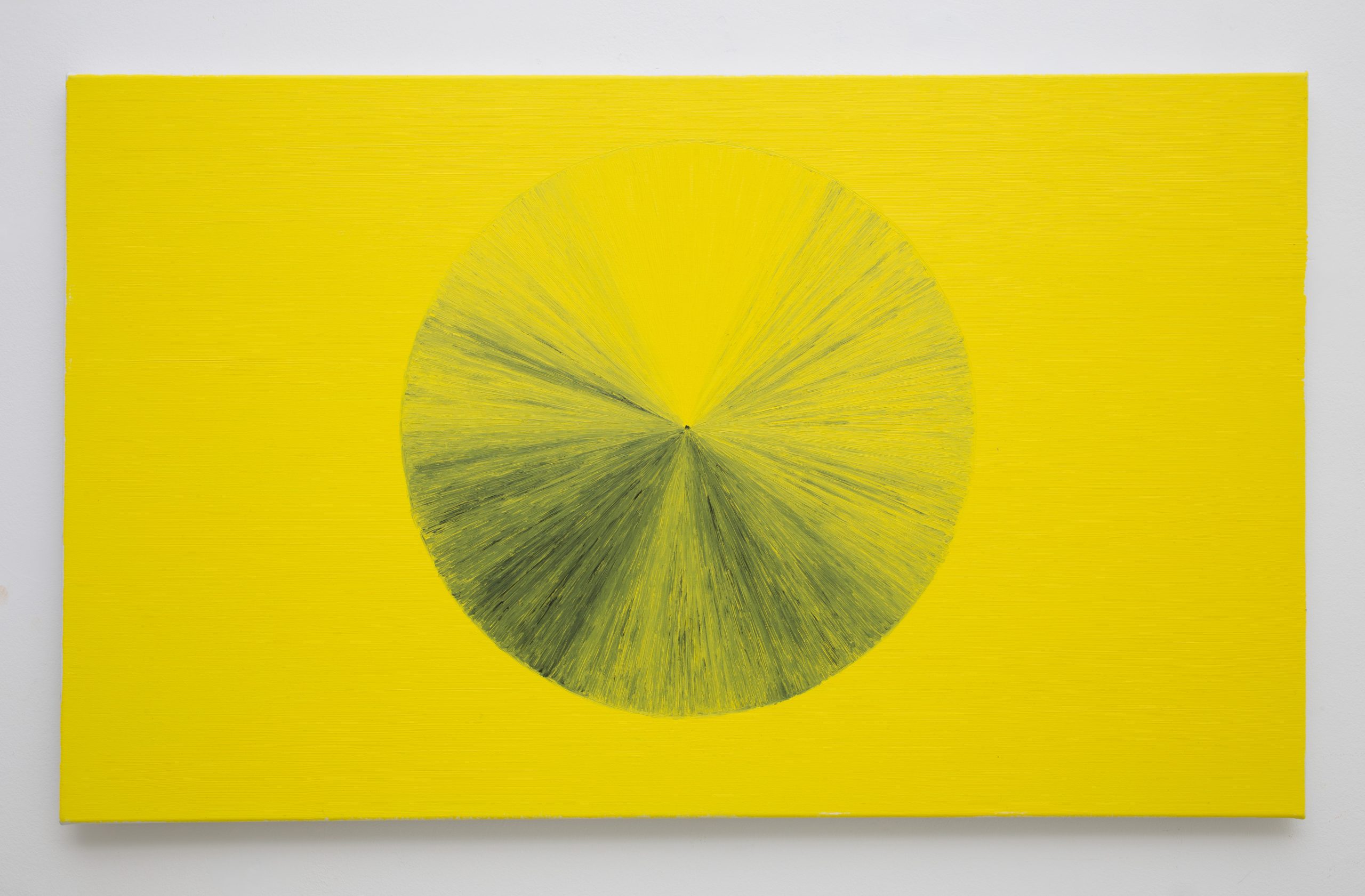 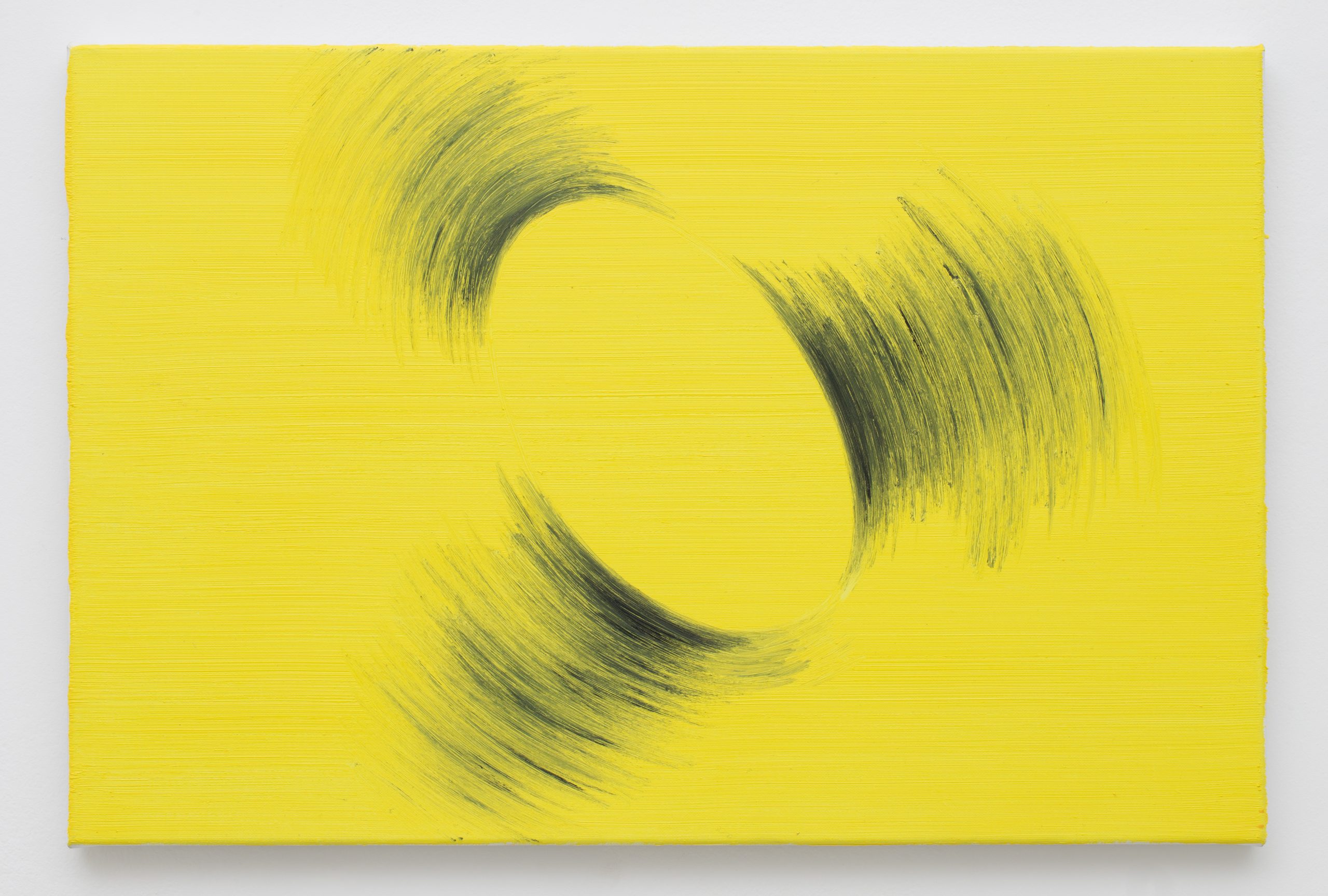 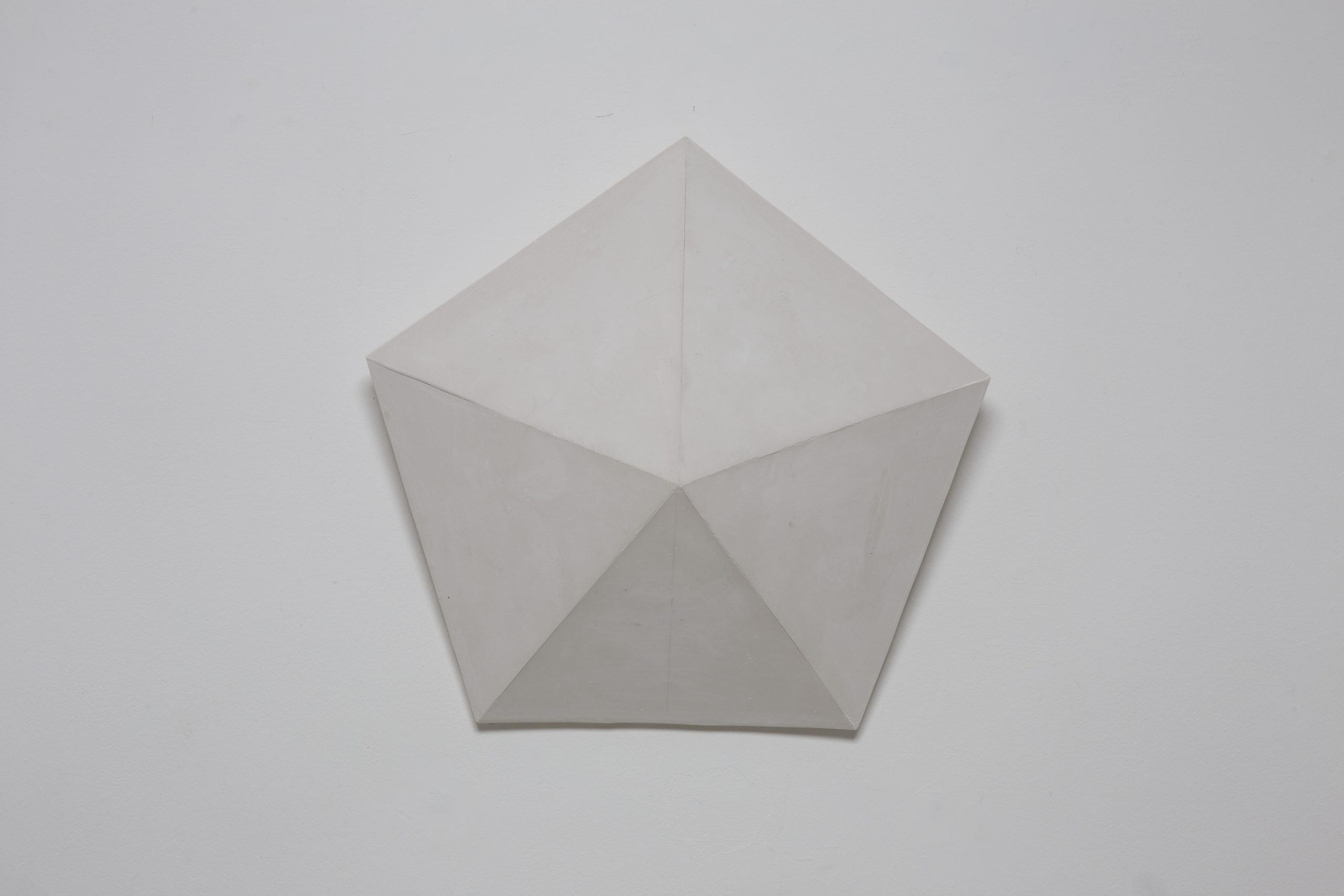 The Fegyver- és Gépgyár Rt. [Arms and Machine Manufacturing Company], known as FÉG, was founded on February 24, 1891. One of their popular products can be found in many kitchens, a wall heater named Calor II. The word calor means heat in Latin. Originally, I planned to use it as the title of this group of objects. (I gave it up because the word is rather unknown, and it is too similar to color.)
Rubor means red in Latin. I practically painted only red pictures between 2013 and 2015. The reason for this was that I had a large amount of unopened cans of red oil paint in stock for years, and when I looked at them I realized that the most obvious solution for creating what I call “active” paintings was using this stock. The former, model-like paintings depicting constellations of everyday objects (lifting weights, badminton balls, bearing balls, etc.) had to be replaced by illustrations of more abstract objects “coming from the opposite direction,” (“flying” towards the viewer), depicting motions.
According to linguists, the names of colors came into being in a determinable order in every language; the order of appearance of the first three colors was the same in all cases: first black and white, then the name of red was born, later on there are some slight differences. It is recognizable even from this that red is the most important color we sharply respond to. Communication with color red is effective.
After a while another active color, yellow, appeared in my practice. Considering the pigments covering the canvases of these past few years, I believed that it was time to enumerate and specify them.
What is on these pictures? Paint. What kind of paint? These kinds of paint. I consider the paintings entitled Color Study as a kind of encyclopedia; they present pigments of these prior years in an ever deepening and accelerating enumeration, originating in one point.
Elements come together in one point in every piece, regardless of whether these base units are simple object-like representations of solid figures (plummet, cylinders, infinite number of edges of a cone, or anything else), or plane figures (triangles) with optional color.
This is the point towards which everything proceeds. The “one” is absolute, something that everything moves towards. This motion – moving towards – is very important in these works. Vector is a quantity that has both dimension and direction. Compared to my former works, the novelty in these illustrations is that they do not depict “being,” certain constellations or conditions, but they move and their motion becomes visible.
Rotor means rotating, as a technical term it is a rotating part of an electrical or mechanical device generating electricity. I call my paintings indicating this kind of motion Turbulences.
Fernand Léger’s art was called slightly ironically Tubism because of the plasticity of the cylindrical shapes he preferred. His 1924 Mechanical Ballet provides a vast amount of examples of numerosity and metallic luster. Because of this, I am fond of it. Metallic luster and the dazzle of star destroyers flash out here and there, like in archaic sci-fi movies. In the Velocity of Objects I-III pictures the cylinders move with the same speed as spaceships, or as missiles in Thomas Pynchon’s Gravity’s Rainbow.
I would like to touch upon numerosity that is always present in my works. The first plaster-cast, the photo of which is displayed here, is a rectangle divided into four sections by its diagonals; its dimensions adapt to the size of the painting of the very same composition. The central point, the One is important here, as well, to such an extent that it was important for me that this one point emerged from the wall, that it approached a few centimeters, came to meet the viewer, and this approach materialized into plaster. It was followed by other plaster-casts, recognizing that any number of edges might approach the One point, may it be three or five or more. The triangle-shaped plaster at the same time looks like as if we gazed at a tetrahedron from the front. Tetrahedron is the first of the five regular Platonic solids, Plato had associated the fire element with it, and with this we have arrived to heat. The pentagon-shaped object is deliberately displayed next to the painting depicting the cone, because setting them side by side emphasizes even more clearly that solely their central point matters, the One that the two representations have in common.
In the militant strategy games (chess for example) movement, changing of position is the organizing power, the evidence. This evidence is presented in my most recent works.

It is best to treat the works of Katalin Káldi together as a whole, without dividing them up according to genre, for this enables their medium-independent, conceptual nature to emerge most clearly. Although the forceful red and yellow palette of her latest paintings marks a striking departure from her previous, more placid canvases, the emphasis remains on the sense of order that characterises all of her works, and on the interrelationship between the different elements. This sense of order, however, is now augmented with an important new aspect: spirited dynamism.
The quiet, still-life-like repose of her older works and the static arrangement of the objects within them offered a kind of “model” of the artist’s desire for order. In a similar way, the works currently on display can be described as placing homogeneous forms or items over a uniform base plane. One important difference, however, is that through their dynamism, these pictures seem not only to exude order, but also to express a deliberate intent.
To gain a better understanding of the artistic intent behind these paintings, it is worthwhile taking a sideward look at pieces executed during the intervening transitional period, which bear the working title of “colour studies”. With regard to the colours arranged into radiating bands, on show in the first, original room of Kisterem Gallery, it is not so much a question of the classical meaning of colour studies, but rather a reckoning or listing of the colours that Káldi has been using in recent times. The flag-like surfaces, shown head-on with no pictorial depth, concentrate in every instance on a single point. These stylistically atypical pieces represent a synthesis of fundamental concepts of colour and geometry that continues to exert a decisive influence.
In her latest works, these basic properties – colours and points – now unfurl in specific directions and in larger fields of colour. The powerful dynamism projected by the yellow regular three-dimensional bodies engenders a feeling of intentionality. The paintings have transformed the space they occupy from contemplative still lifes to active fields of imagery. The momentum of the shapes leads us to associate the cylinders with bullets and the swirls of interconnected circles with some kind of energy or radiation. The lively and active character of the works is also underlined by the title of the exhibition, Heat. Heat radiates, spreads and imposes its effect, just like the latent energy within the diagrammatic motifs that prise open the plane of the works.
The “modelling” referred to above plays an important role in Káldi’s creative practice, for in general her work is based on mock-ups or scale models. Everyday objects depicted in perfect proportion have recently given way to geometric bodies; whilst maintaining their original ratios, they can be enlarged at will, without their identities being altered in any way.
The mock-ups are a determining factor not only in Káldi’s paintings, but also in her photos. Her artistic practice, whose reputation rests primarily on her paintings, has been accompanied from the very start by photography, which has gained increasing prominence in recent years. The objects and models visible in her oil paintings can often be recognised in her photographs as well. Besides the links connecting the photographs and the canvases, her simplified plaster casts also prompt a reconsideration of the relationship between the mock-up and the finished work, and lead to renewed questioning of the status of the autonomous artwork.
As is customary with Káldi, alongside the rule implied by the sense of order, the exception to this rule is also always given an emphatic role. Works that differ from the others in terms of medium and scale, while remaining identical – or at least similar – in form, perform the important function of interrupting the overall orderliness of the exhibition, which is determined by the paintings. Regardless of the medium she uses, the artist’s fundamental premise – namely, the need to create order – holds true in every case, and can be seen in the different clusters and alignments of points and edges in each individual work. Thanks to the diversity of genre, however, the logic that creates equilibrium between the rule and the exception is in evidence not only in the tension of the works but across the exhibition as a whole.
“By creating order we may succeed in overcoming chaos and incomprehension, and through the construction of a little mock-up model, we may at least be lulled into such an illusion. Nevertheless, regular structures and regularity can only become interesting and mysterious if done approximately, for the perfectly regular is monotonous, boring and dumb. The structure should therefore also be a little disquieting, slightly outside the comfort zone.” ⎯ Katalin Káldi