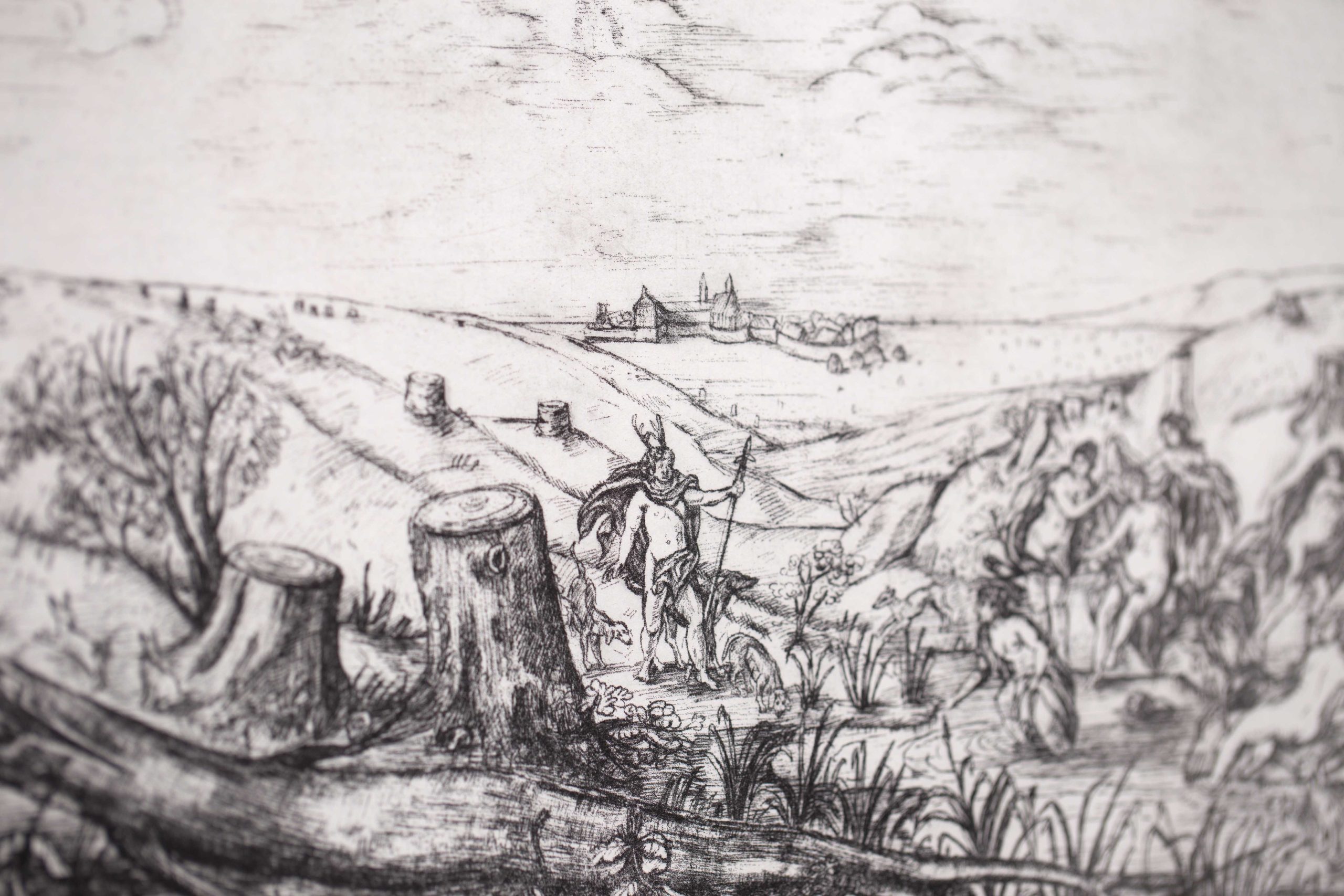 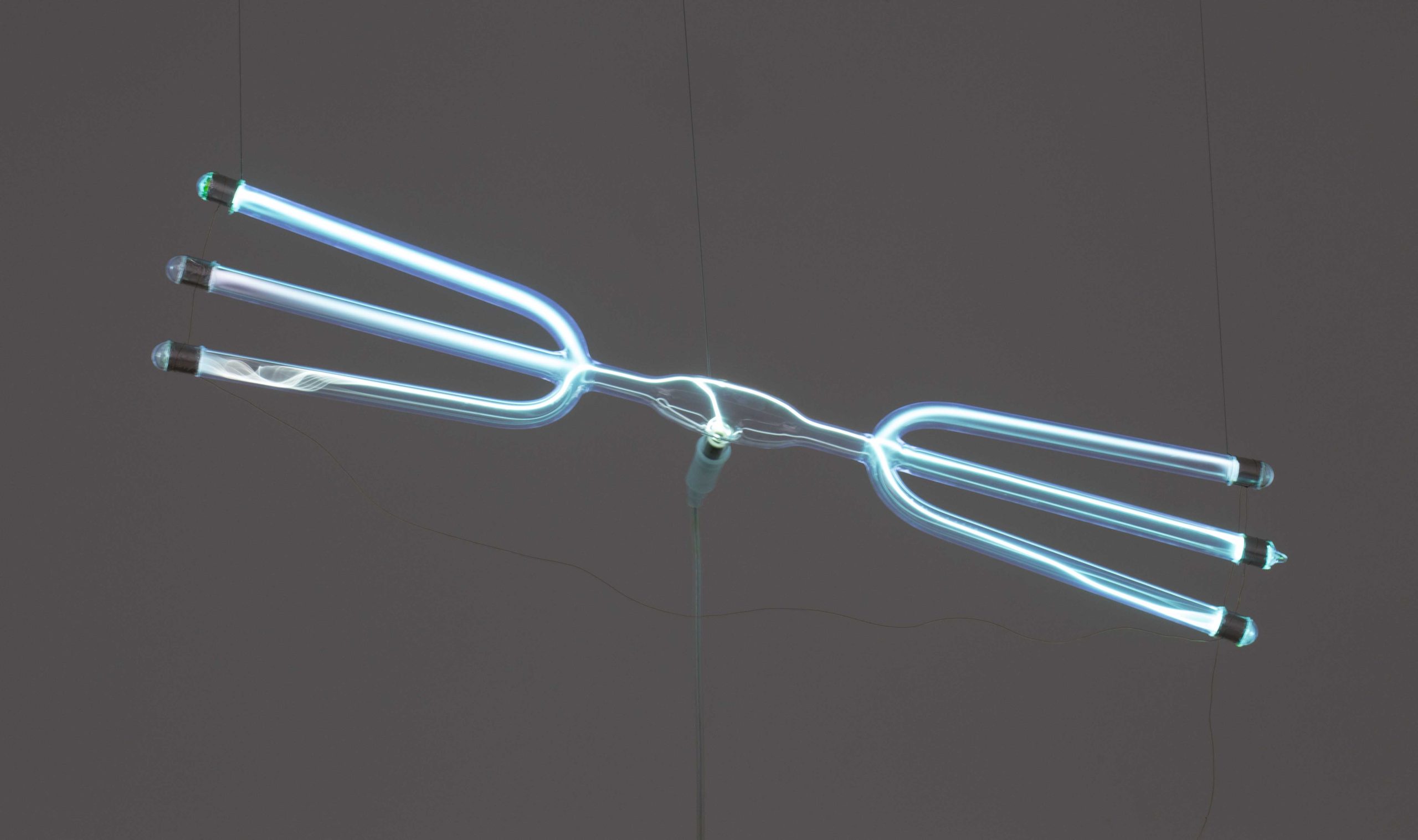 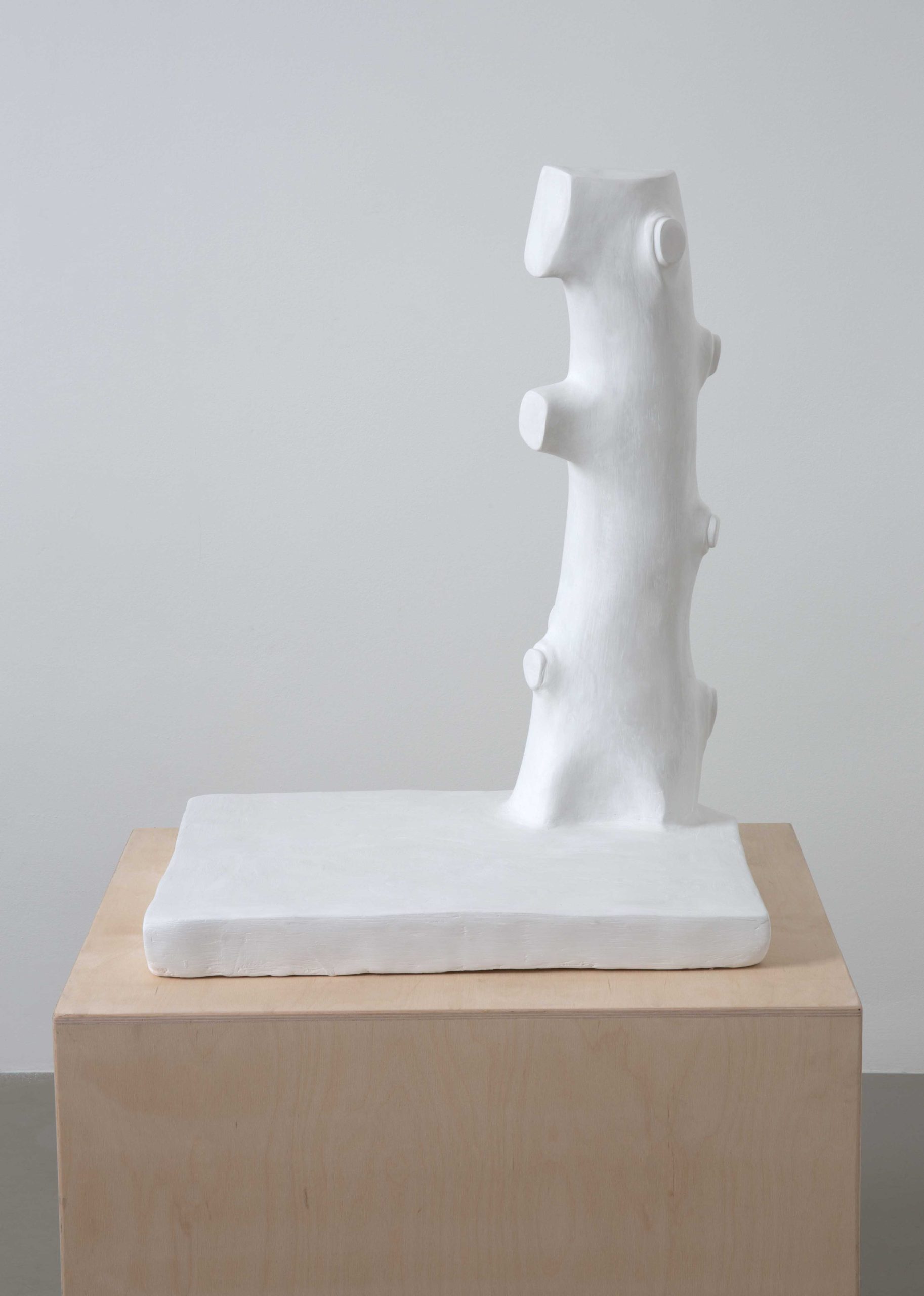 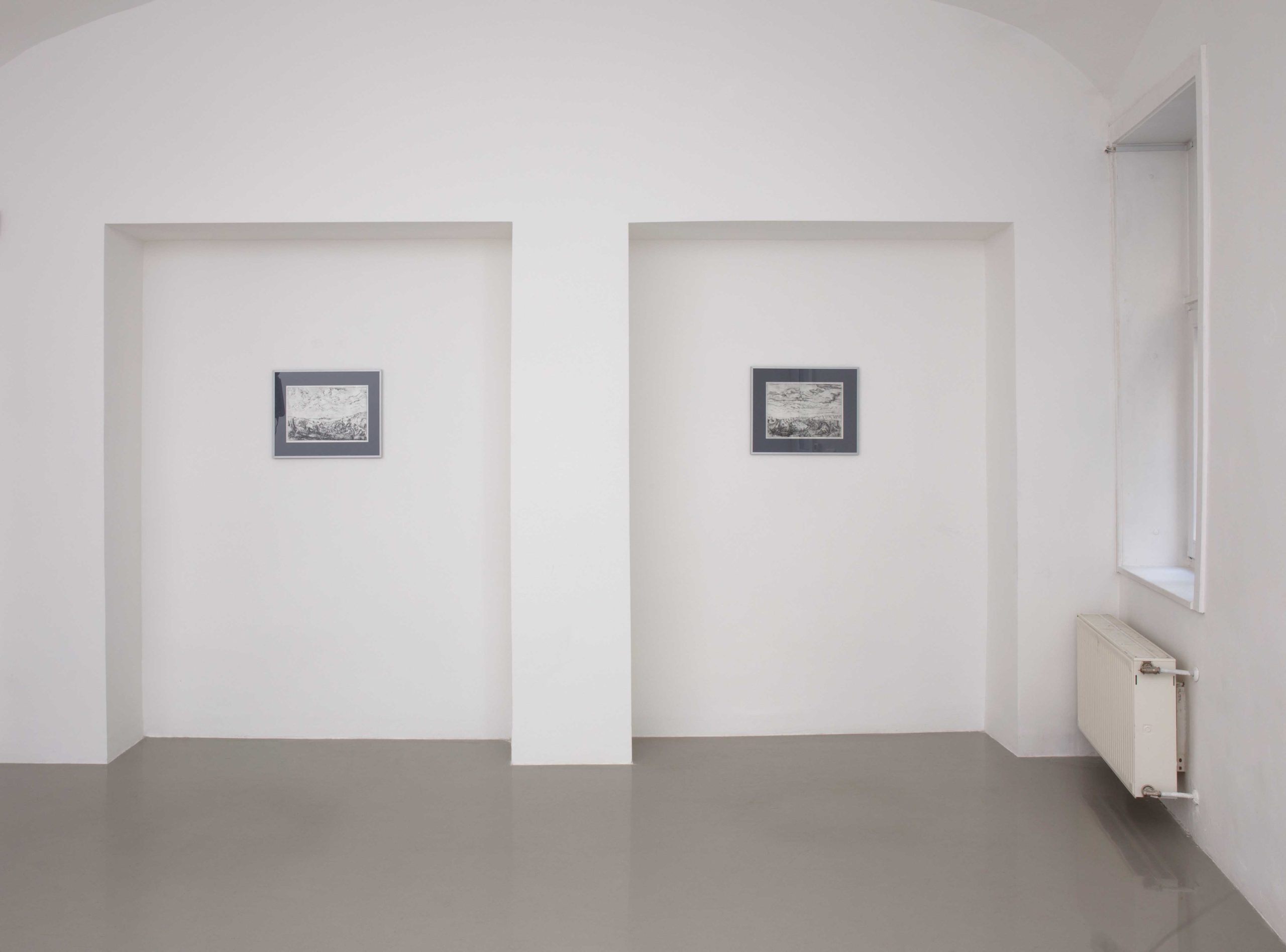 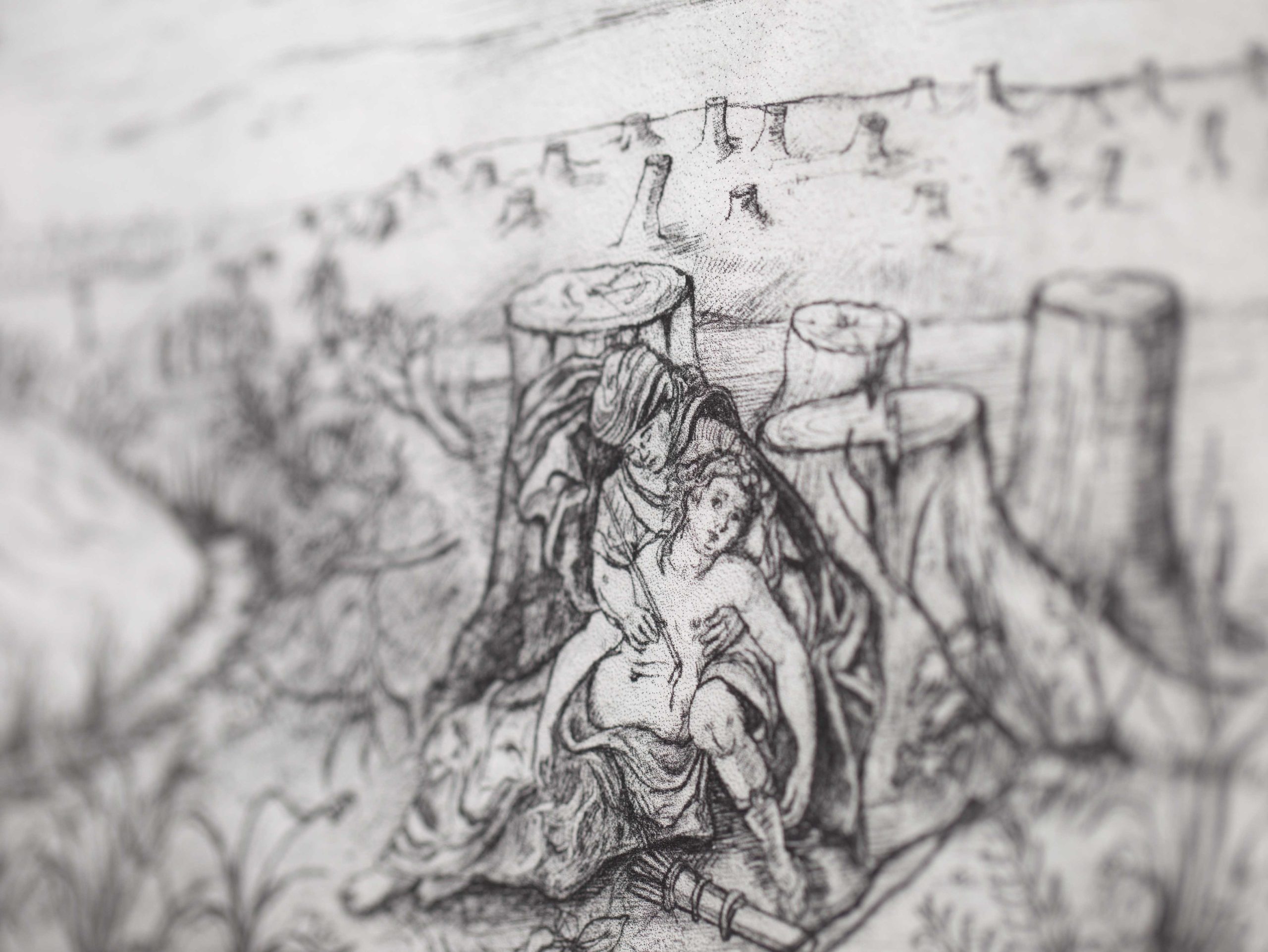 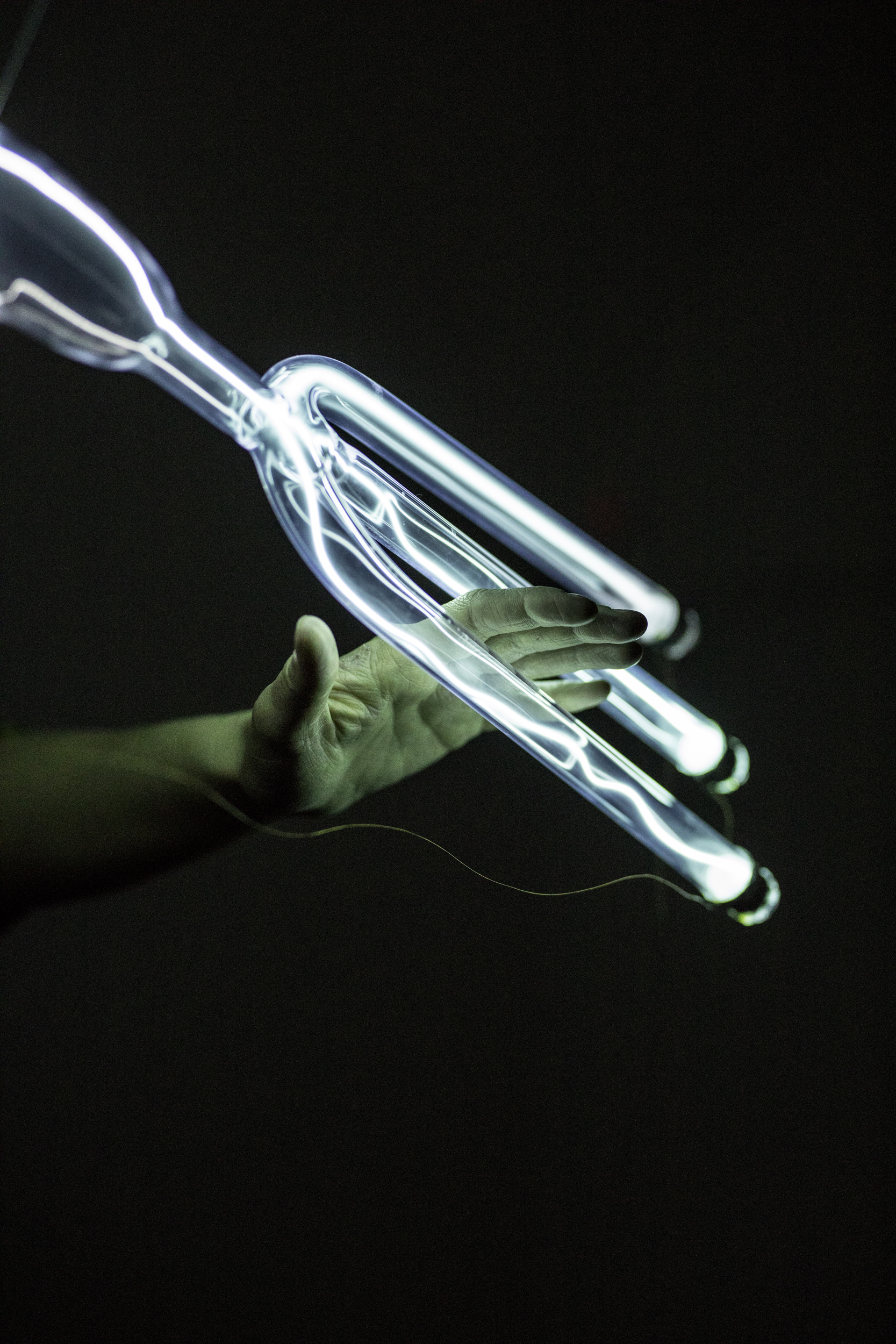 Flashforward is in part a flashback: it refers back to the mythical ethos of Kitti Gosztola’s solo show, Ruminatio, presented last year at the King St. Stephen Museum in Székesfehérvár. This time, once again, the contradictory relationship between humankind and the exploitation of natural resources is approached from a historical perspective. The mythical figures that she evokes, wrenched from their original environments, are recontextualised in unfamiliar situations. The exhibition is organised around the theory of Giambattista Vico, a philosopher from the Age of Enlightenment. According to Vico’s genesis theory, the descendants of Noah scattered after the flood and became rampant giants, roaming through infinite forests. They only awoke to their human nature upon hearing the thunder and looking up at the sky. They submitted to the lightning and created their own image of god. In awakening to self-awareness, time-consciousness was brought into being to counter the timelessness of the dark woods, and people began to build cities while simultaneously cutting down forests. Paradoxically, the act of deforestation is intertwined with the desire to behold the divine and establish civilisation. Vico traces the terrifying image of the forest in Western culture back to the ancient cult of the sky, which inevitably resulted in humankind defining itself in opposition to the forest.

The vibrant light coming from Gosztola’s six-pointed system of plasma tubes, which abstracts Ancient Greek depictions of lightning, illuminates some solitary tree stumps. The scale plaster replicas of the tree-stump supports of Ancient Roman statues are lacking the statues themselves: a mortal human, a young athlete tying a victory ribbon around his forehead; a demi-god, a satyr pouring wine; and a god, Hermes tying his sandals. It is as if we were making a disturbing discovery in a glyptotheque displaying nothing but the pedestals and the supporting elements. While the representation of absence is unsettling, it accentuates the presence of the three figures who have ‘disappeared’ from under the ‘tamed’ thunderbolt, symbolising the king of the gods.

The empty space is even more apparent in Gosztola’s heliogravure prints. The reproductions of works by the Flemish landscape painter Denis van Alsloot adapt mythological scenes, originally set in forests, but without the trees. Actaeon stares at Artemis bathing with her nymphs, and in revenge the goddess transforms the hunter into a stag, who is ripped to pieces by his own baying hounds. In the equally tragic story of Cephalus, he is followed on his hunt by his jealous wife, Procris, whom he mortally wounds, having mistaken her for an animal. The tragic nature of the reproductions is mixed with a touch of irony too, for not only does the composition break down, so too does the narrative in these stories of hunters, when deprived of the forest – in the bleak, desolate landscape, the act of spying on someone is rendered absurd. Reproduction, fragment, absence; the eroding pattern of memories bequeathed to descendants by periods layered on top of one another. Gosztola uses an assured hand to select and rearrange the finds of the past, whose peculiar constellations are quotations and prophecies at the very same time.