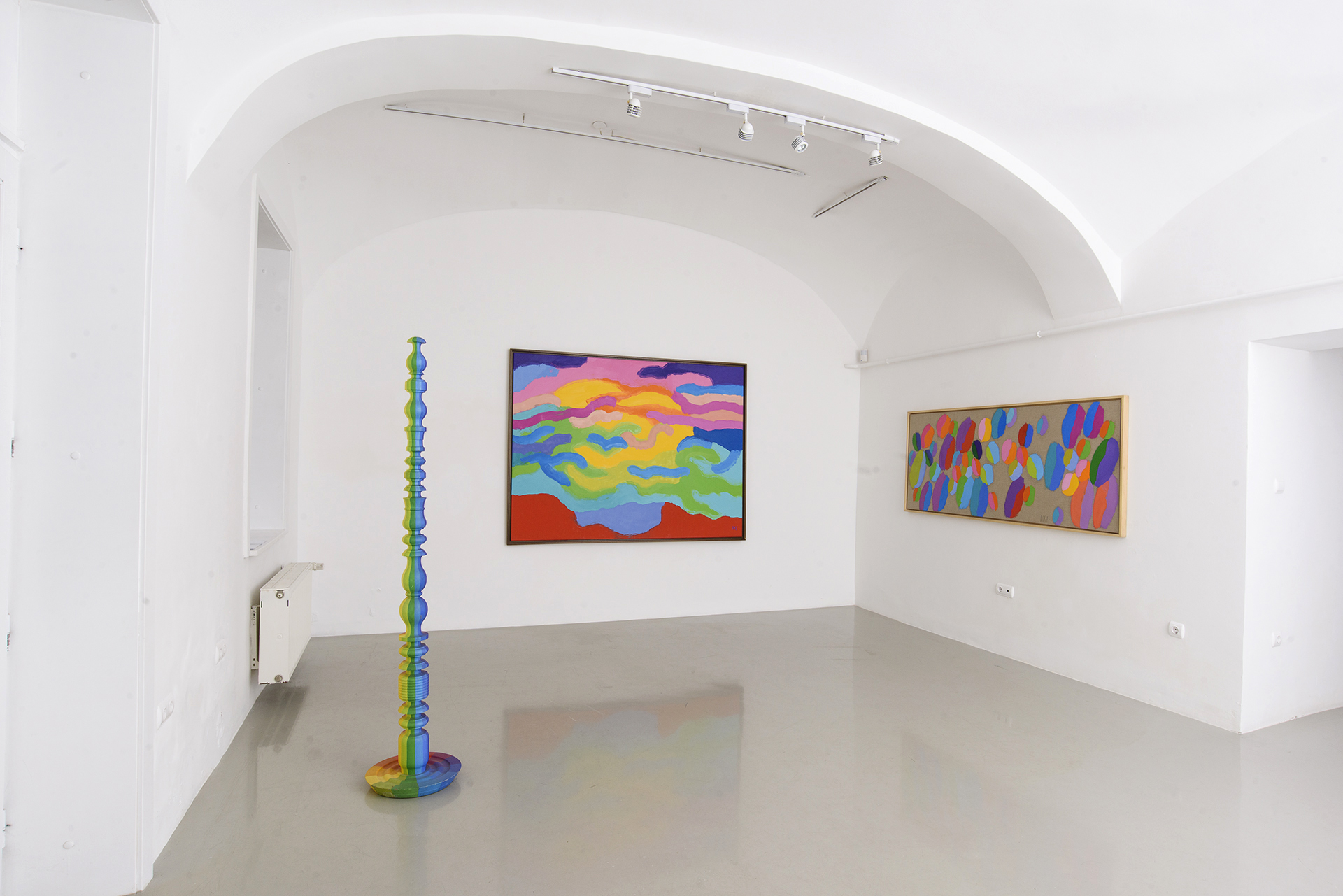 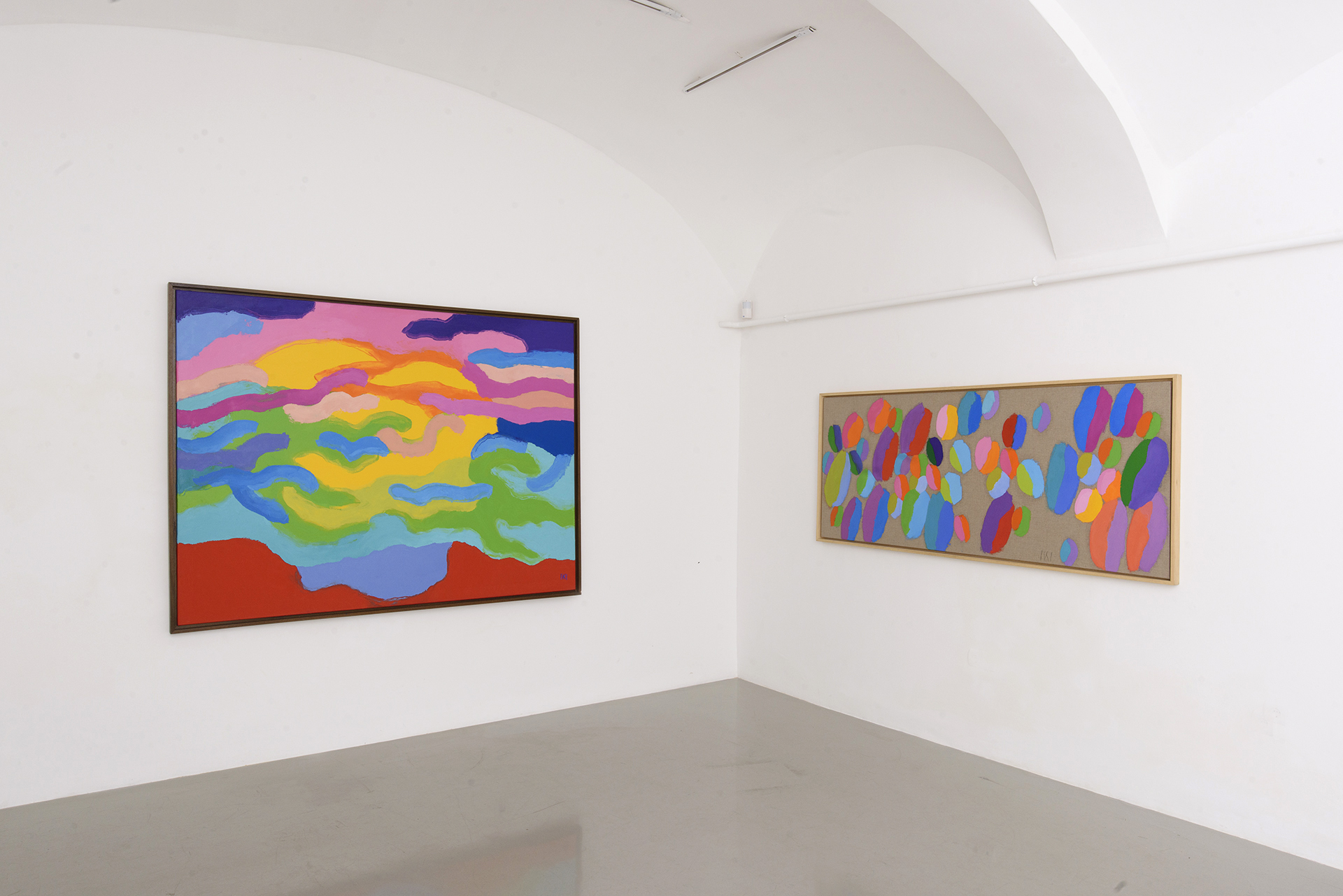 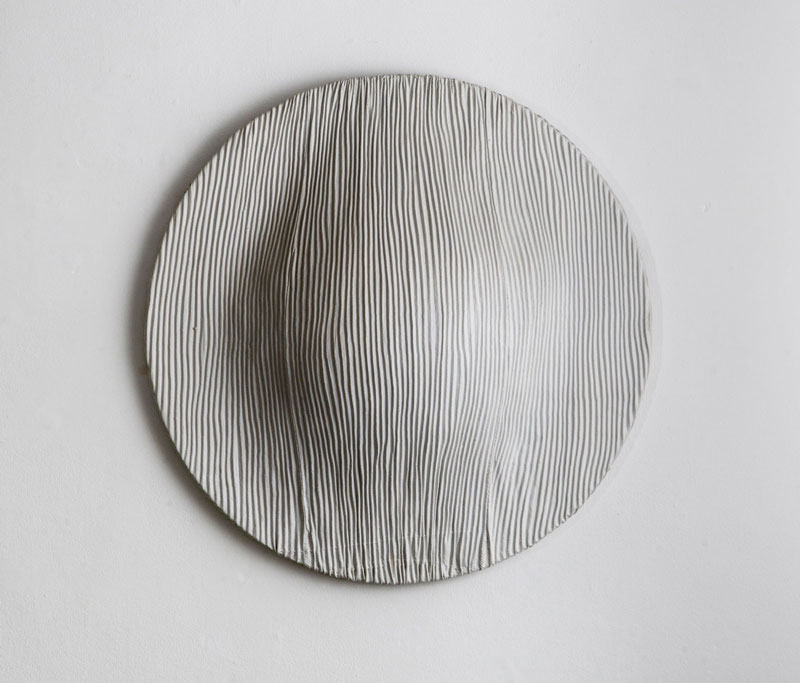 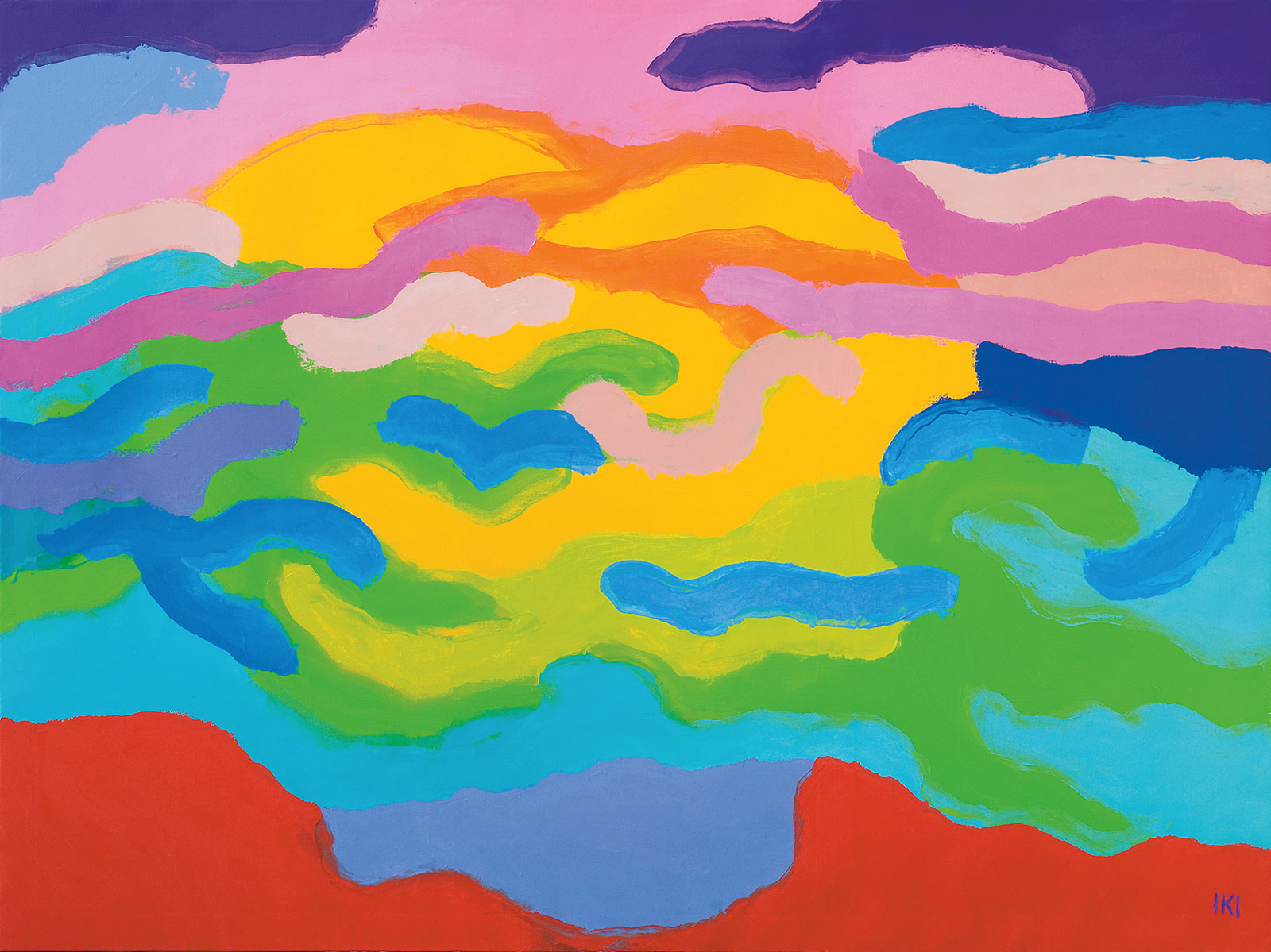 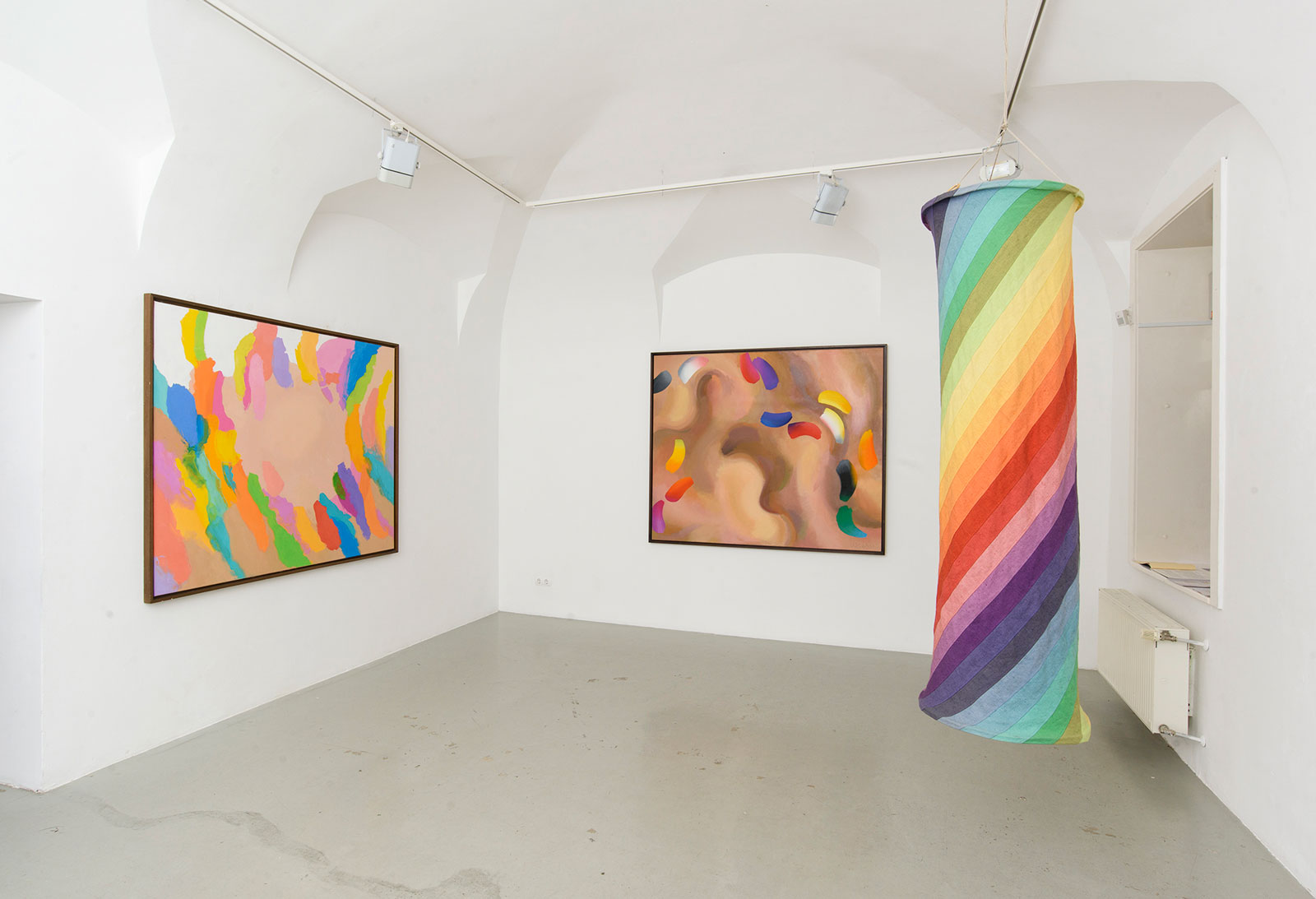 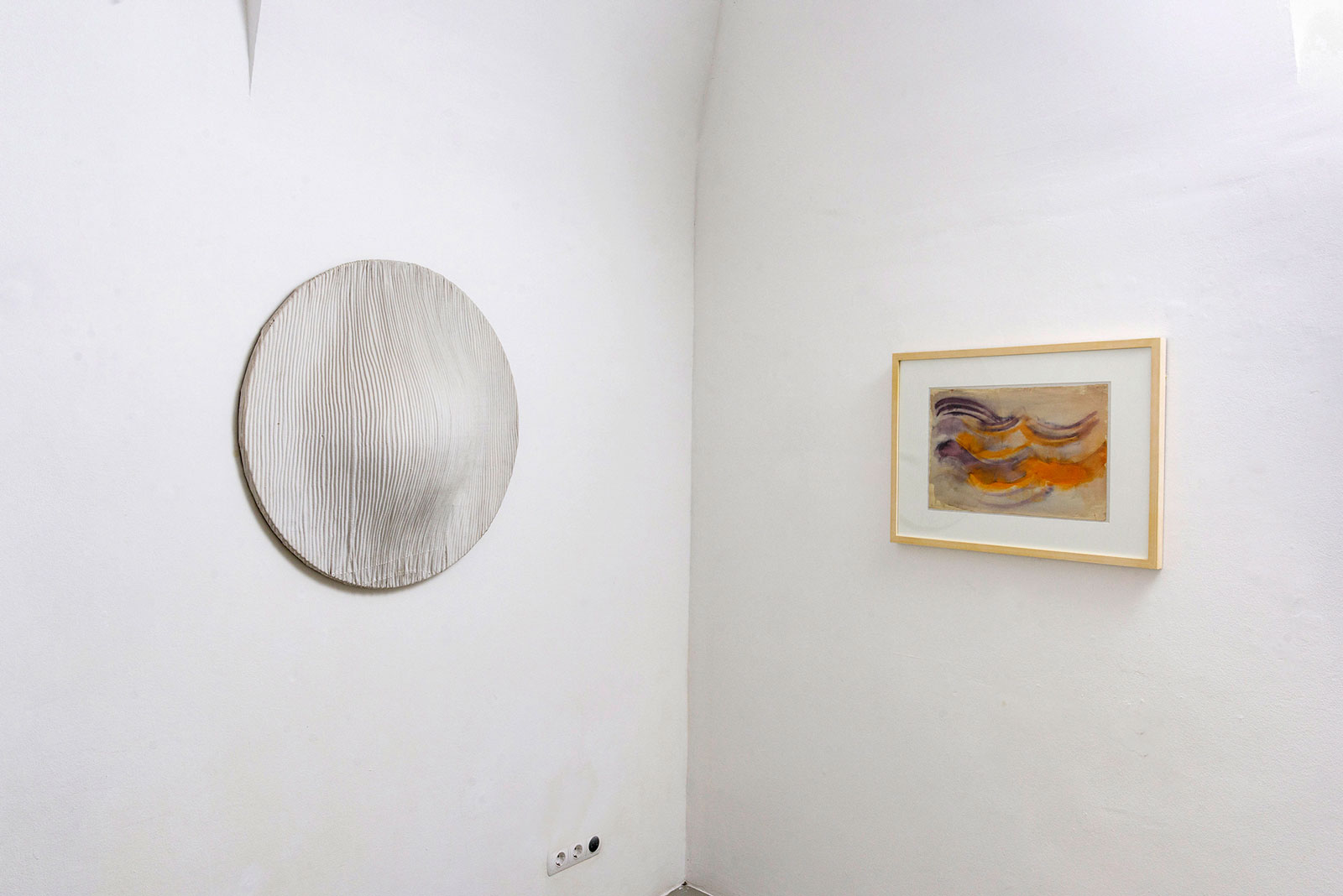 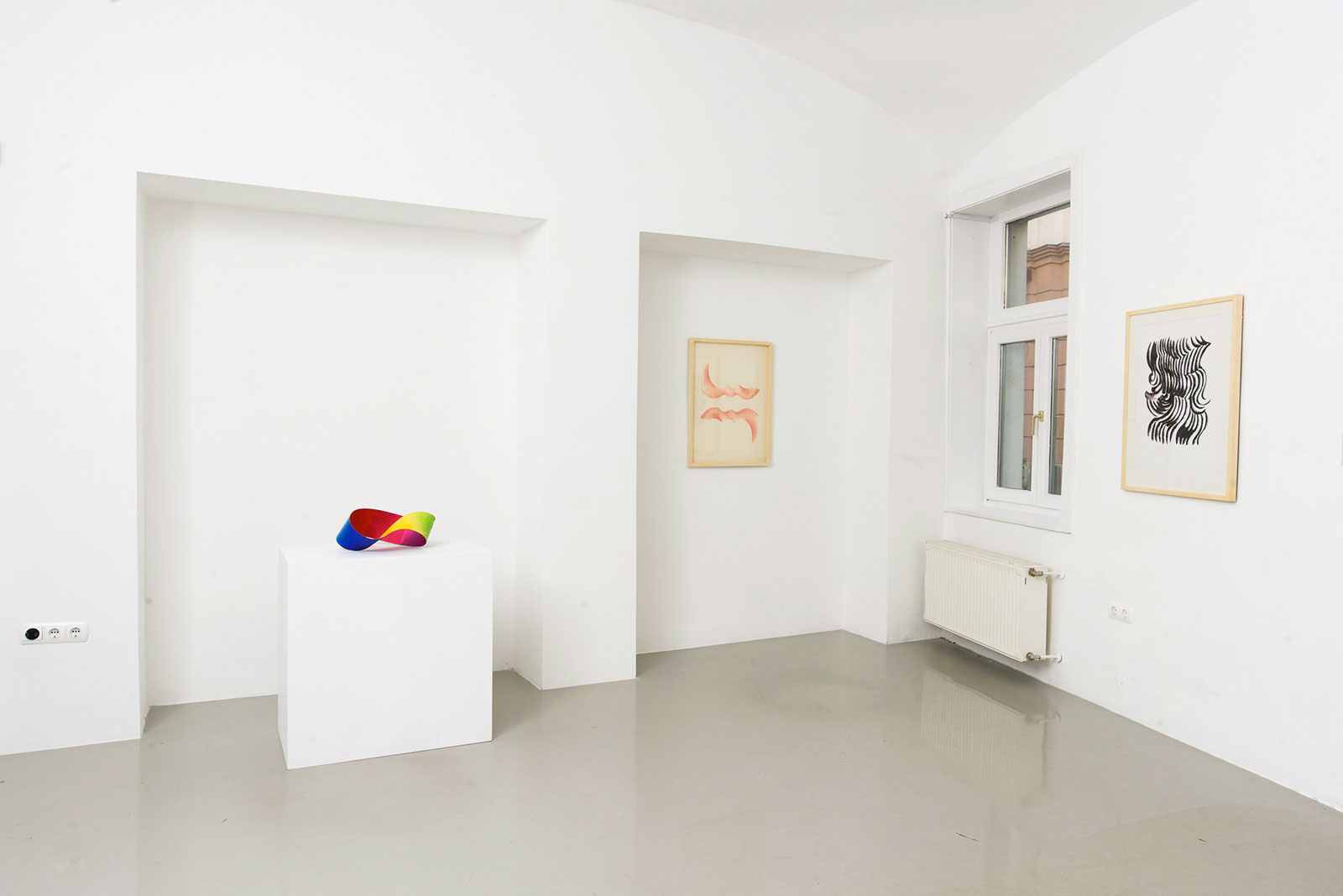 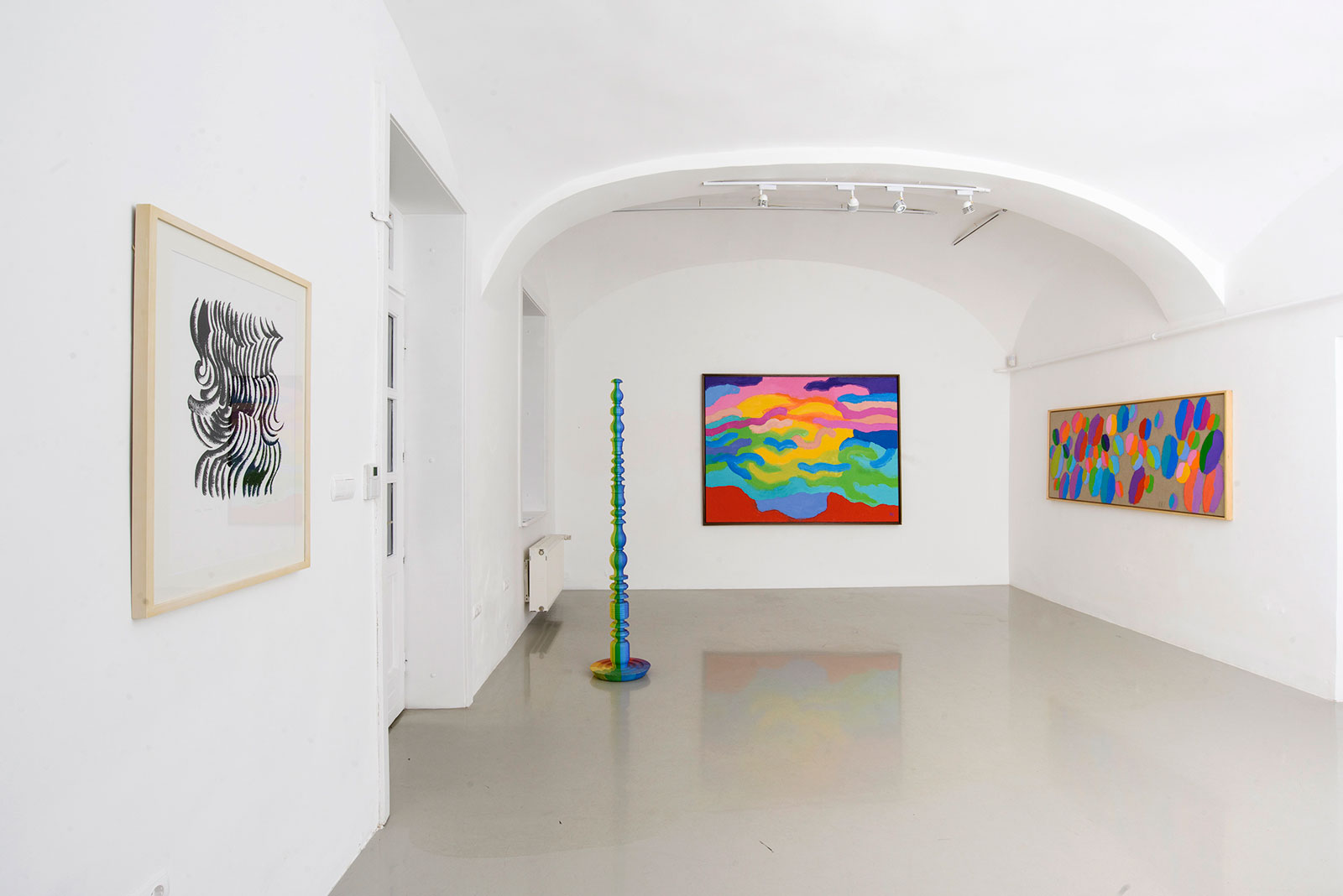 “I believe that the specific scale of colors is the most solid thing in this world (…). Figures that carry this coloration are not necessarily final” – Géza Perneczky wrote at the beginnings in Budapester Rundschau, in 1986 about the art of Ilona Keserü.

Today, in 2017 we can confidently pronounce that the above-mentioned statement is true. The axis of Ilona Keserü’s painting is in fact her relationship with colors changing in space and time, their examination and manifestation.

At the end of the 1960s a new trend appeared in her artistic practice, called color study by Keserü herself. She wished to broaden her previous – red – orange – pink – oriented color application, primarily towards the range of spectrum colors. A special and motivating moment in this was the photo of a candlelight that decomposed the natural sight to its elements, which she received from Géza Ottlik, and which was probably a colored page of a foreign calendar. The theme of numerous paintings became the analysis of the scale of colors mixed from pigments, decomposing and blending of colors, and achieving the greatest color intensity that can be mixed from paint.

“In 1972 I painted on a wavy surface a picture composed of hexagonal spots. Clean colors of refraction of light approached each other in a great variety of shades in this picture. I was searching for neutral, translucent shades; I did not want to use grey. I was mixing light ochre, green, and pink with one another. Fine transitory colors were created, that mostly resembled to my skin as I was observing my moving hand in front of the painted spots (…). The intimate and mysterious color of skin – according to Goethe: »in all of its differing variations it is not in the least a basic color but a manifestation created by organic preparation« – the refraction of light, the rainbow attract each other with all of their shades, create a harmonic unit with all of them.

I have been creating a series of pictures and objects for years based on these realizations.”

From the Endless Line of Colors to the Cangiante

In the case of the Color Pillar, the Cylinder Superficies, or the Sound-Color-Space action created together with László Vidovszky, manifesting as the continuity of colors, and later the endless color-ribbon-tangles, the subject of the picture was simply the painting of the line of colors, the visualization of a compositional harmony using several kinds of painting techniques.

During this thinking process was Color-Möbius created in 1987, which since has been recreated as an independent object or painting’s motifs in different sizes and uncountable variations.

Different continuously interlocking shades move smoothly in an inexplicable space during the linking of the infinite color line and the Möbius form. However, Möbius reliefs also generate unusual arrangements and uncommon color chords. The cangiante, the mew discovery of the 2000s is not based on this realization, though.

In 2001, during her visit to Rome, Ilona Keserü Ilona saw a new optical phenomenon in the cleaned frescos of the Capella Sistina – although it was rather widespread in Michelangelo’s time – the name of which was cangiante. This realization opened a new chapter in Keserü’s art that was natural, passionate and was accompanied by a real research mind.

Cangiante is a word of Arabic origins, it means changing of color and appeared well before Michelangelo in the 14th century in Middle Italian painting, but Keserü found traces of its usage even in the 20th century modern Italian painting (in the works of Perilli and the Form 1 group). However, cangiante itself used to be a generally accepted custom of painters for depicting primarily draperies and garments. Its substance is that instead of complementary or so-called harmonic color pairs it uses color values that intensify their own lights and each other’s brightness, which are not based on logic but on individual color preferences. The painting technique spreading by oral tradition was finally written down by Cennino Cennini in his handbook Il libro dell’arte, in which he also included concrete techniques. In the frescos of the Capella Sistina Michelangelo gave a new impulse to the tradition; he found the hidden potential of cagniante by applying new color pairs and employing sculpturesque compositions to intensify the expressive effect. Ilona Keserü was captivated by these unexpected, flourishing color accords, “sometimes horrific things,” purples-blues, oranges-greens. In their application in painting, however, it is not only the harmonic-dynamic appearances of the intense color combinations what interests her, but the musical harmonies recalled by the color changes, the nature of the “most concealed substance.”