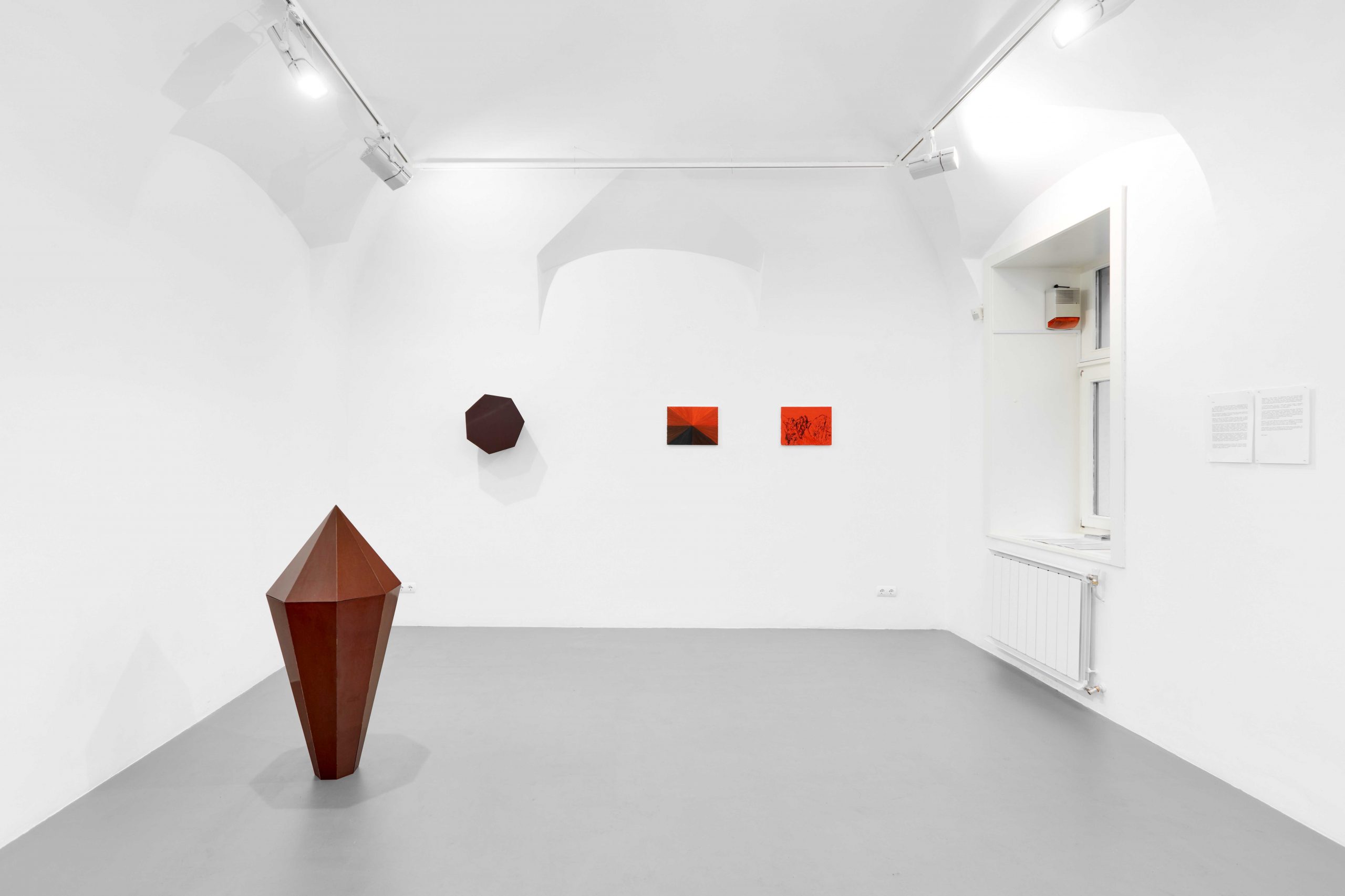 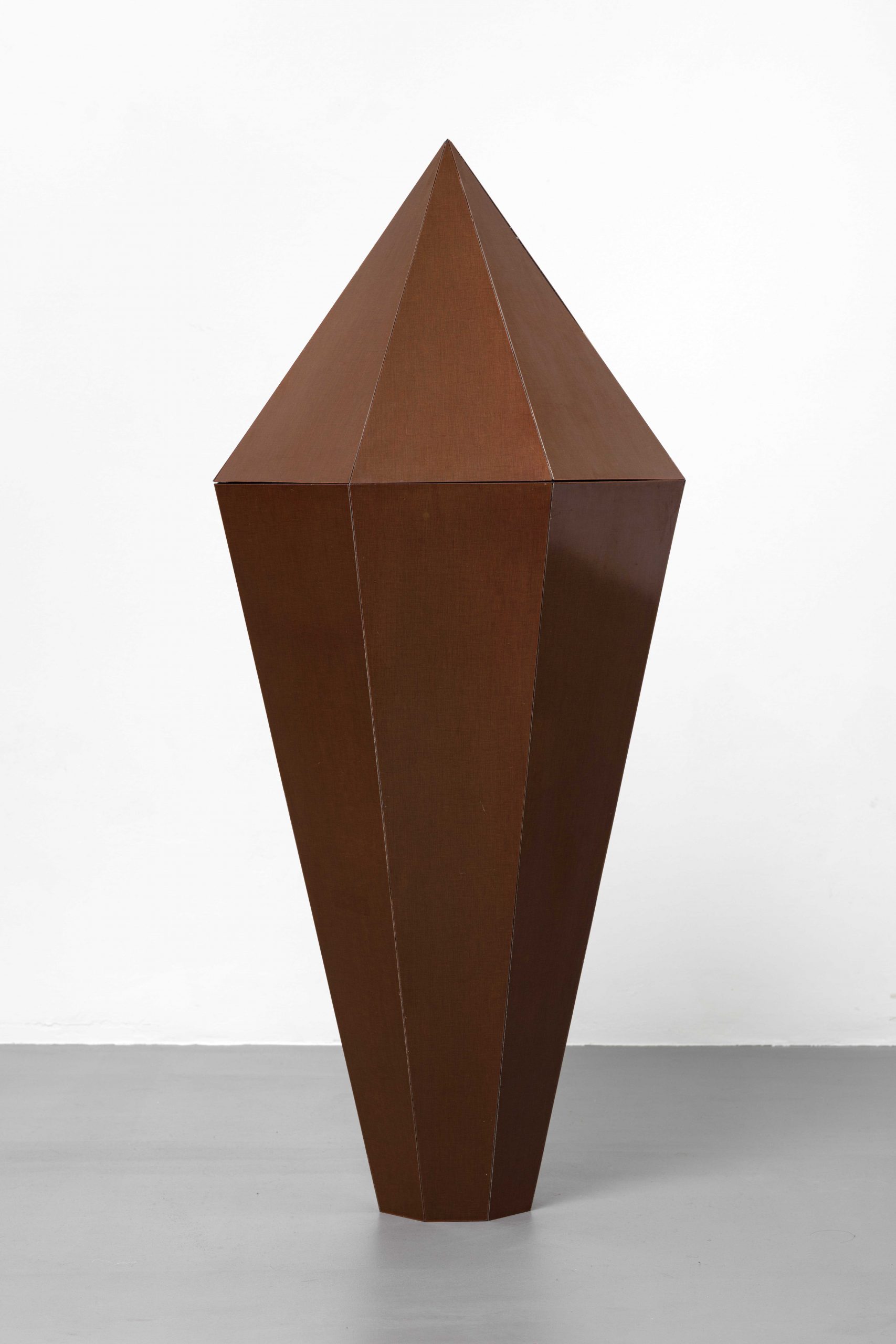 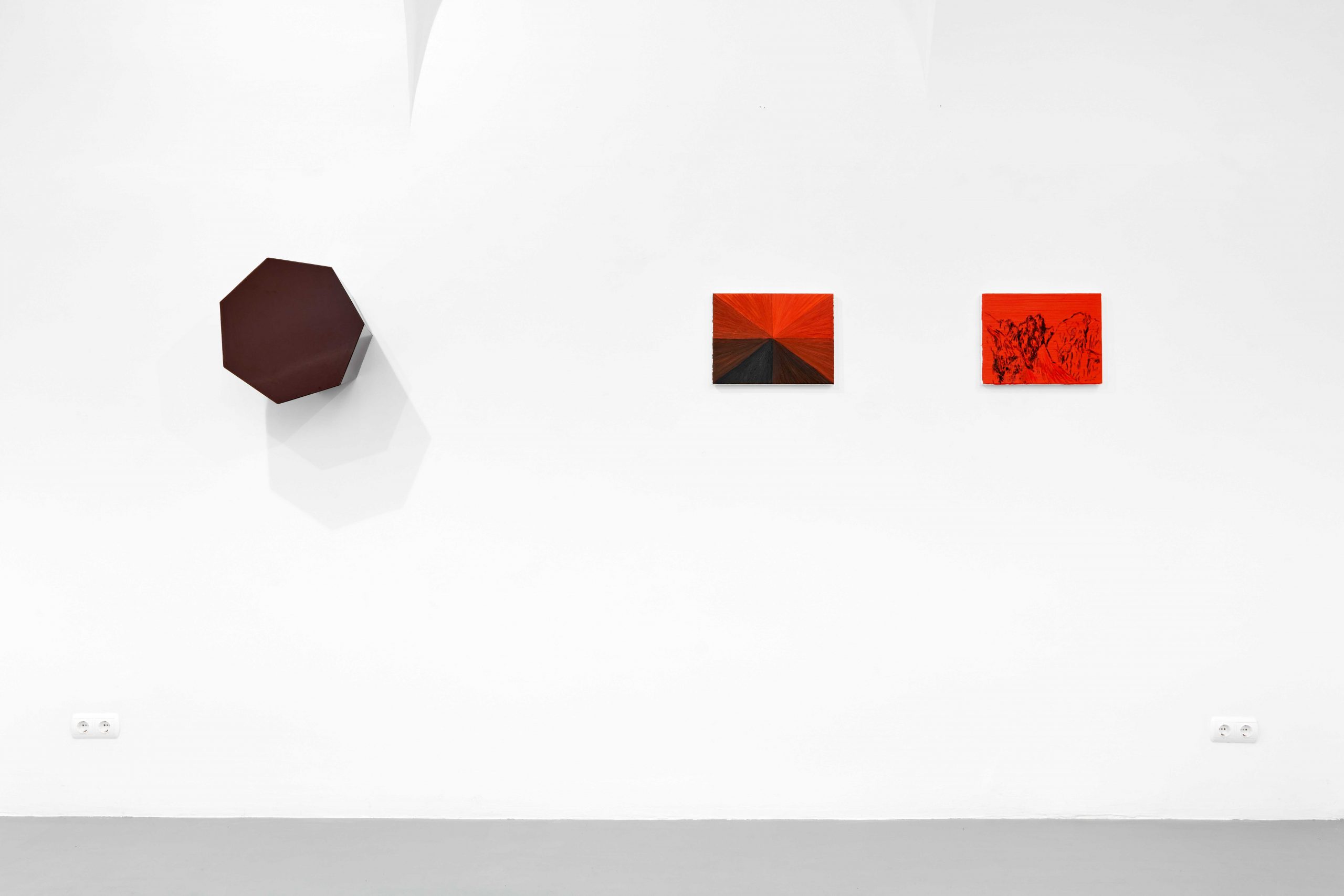 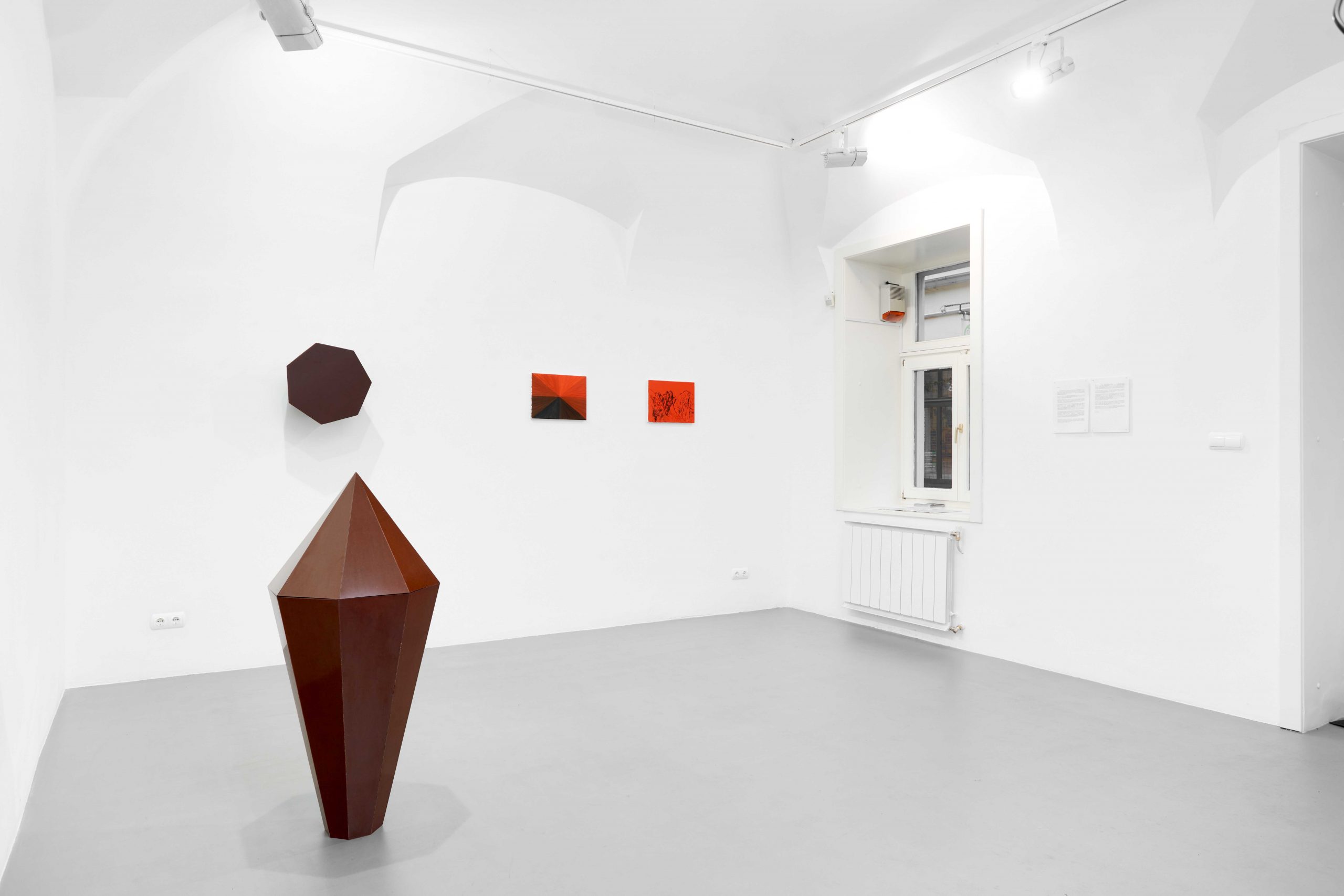 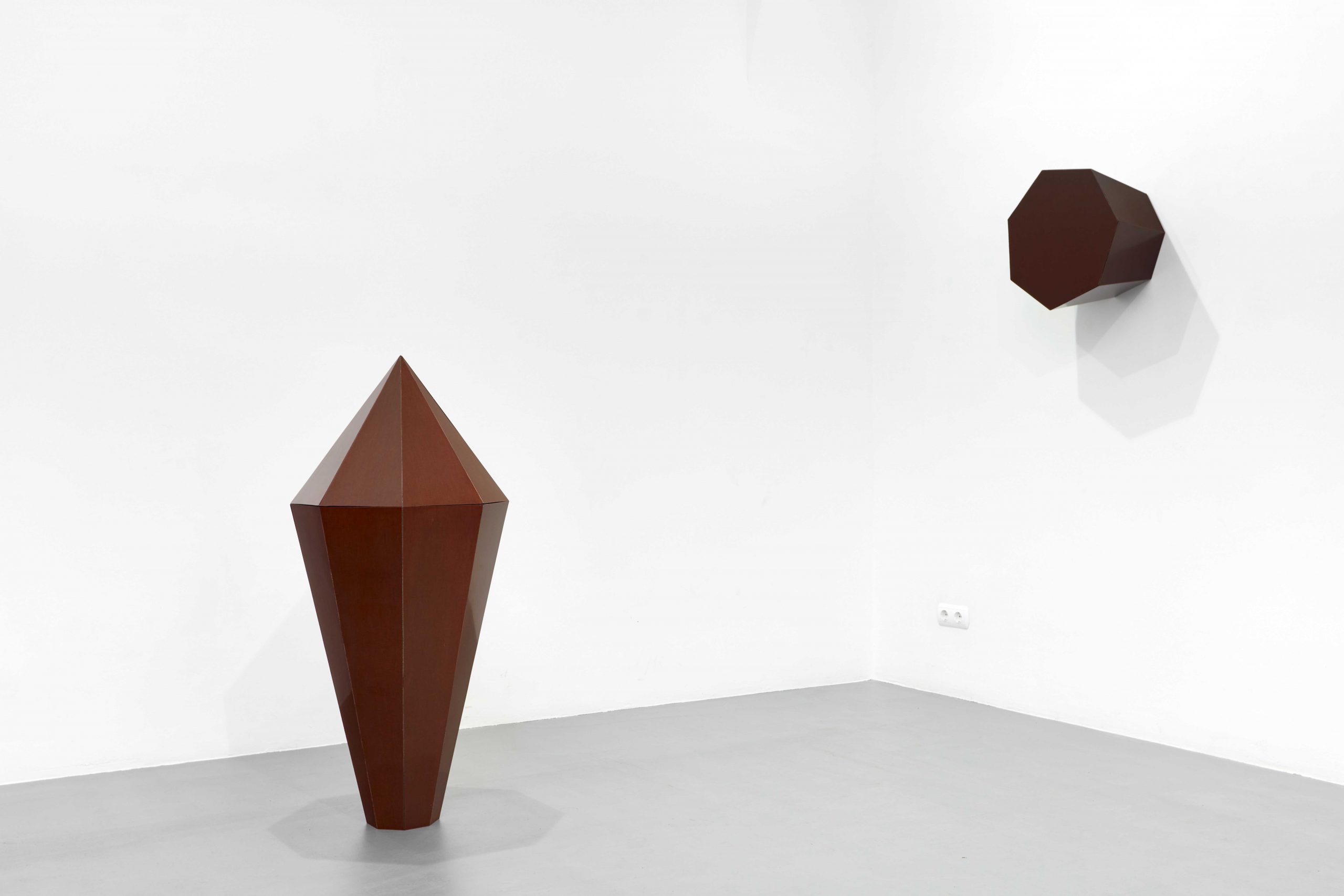 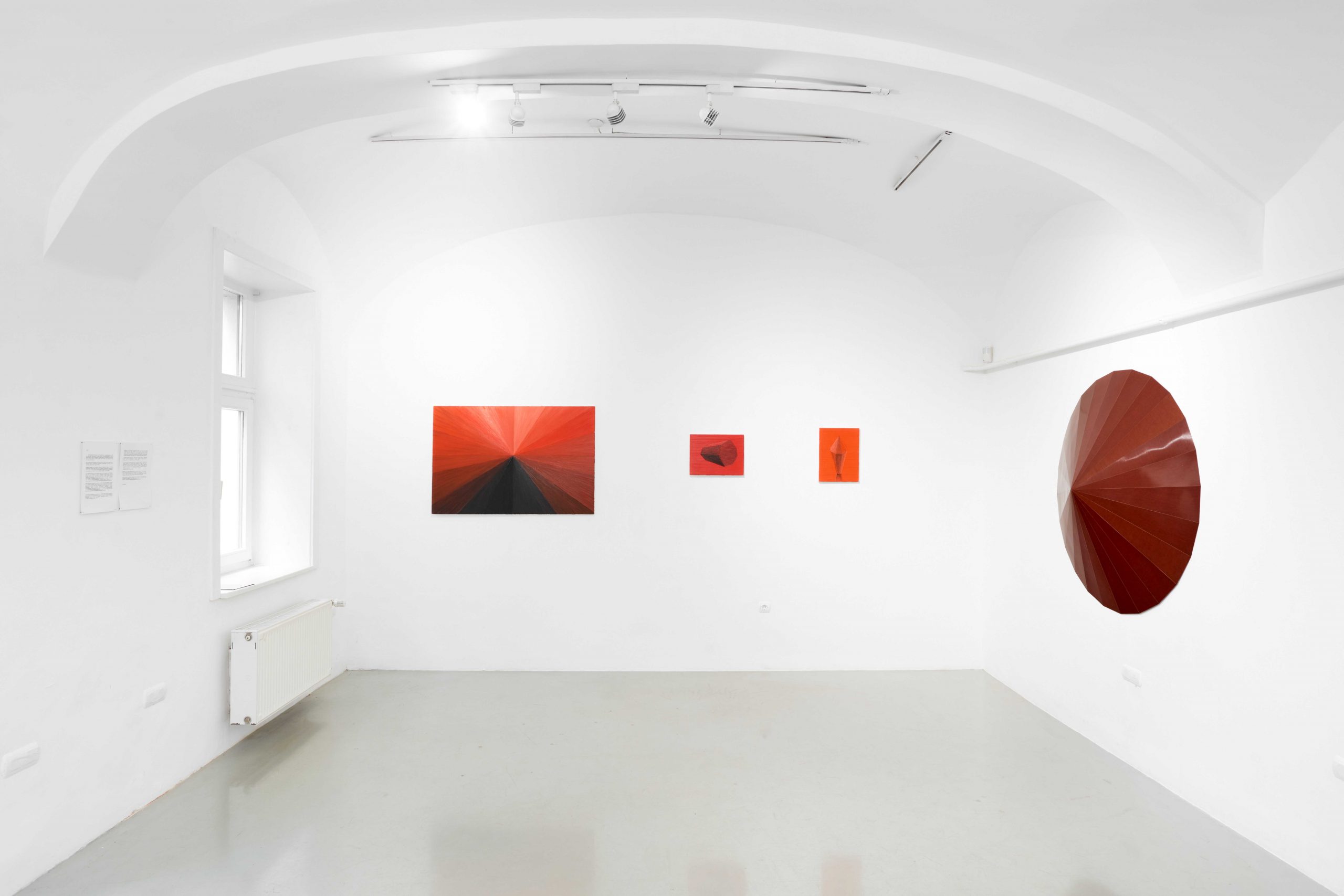 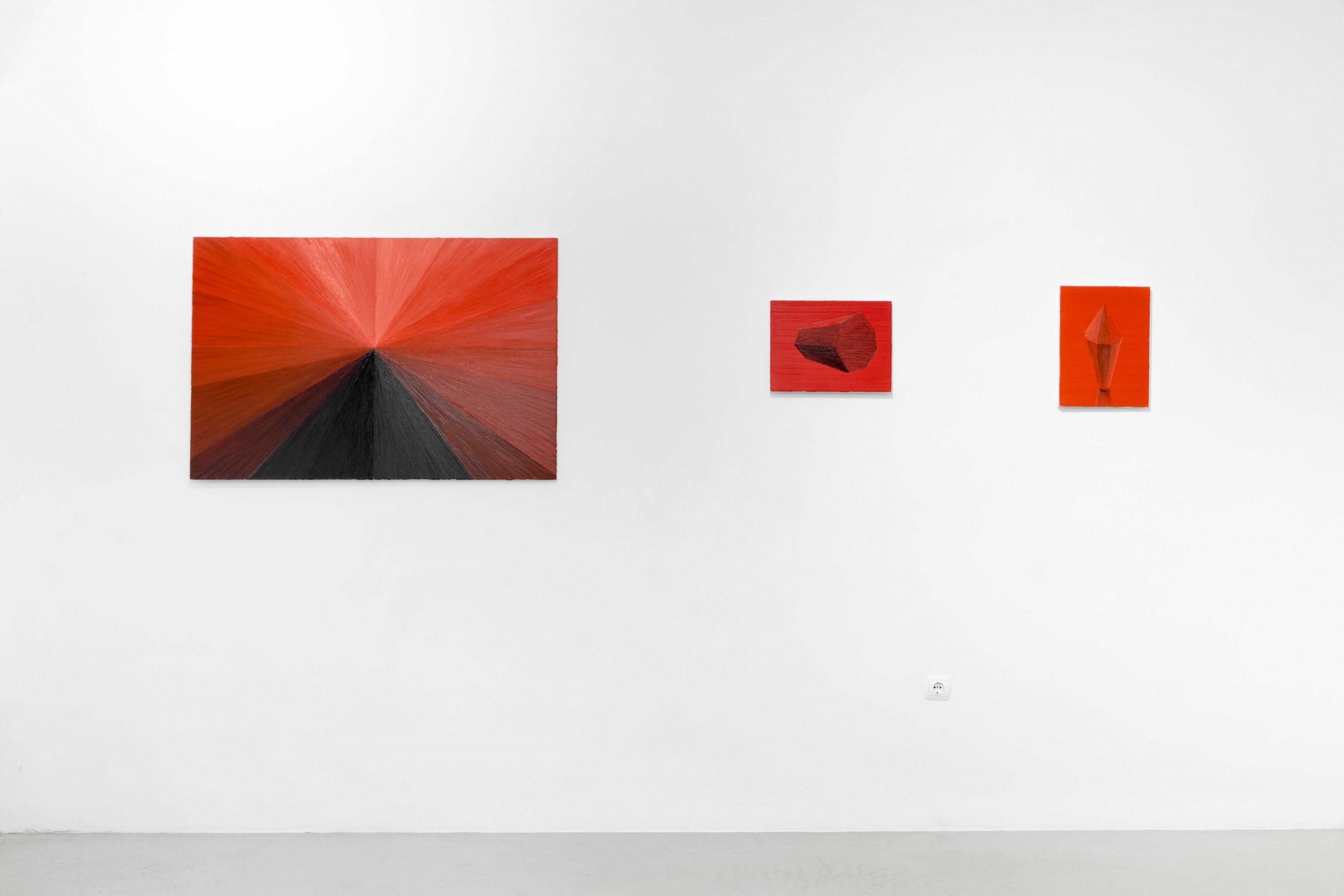 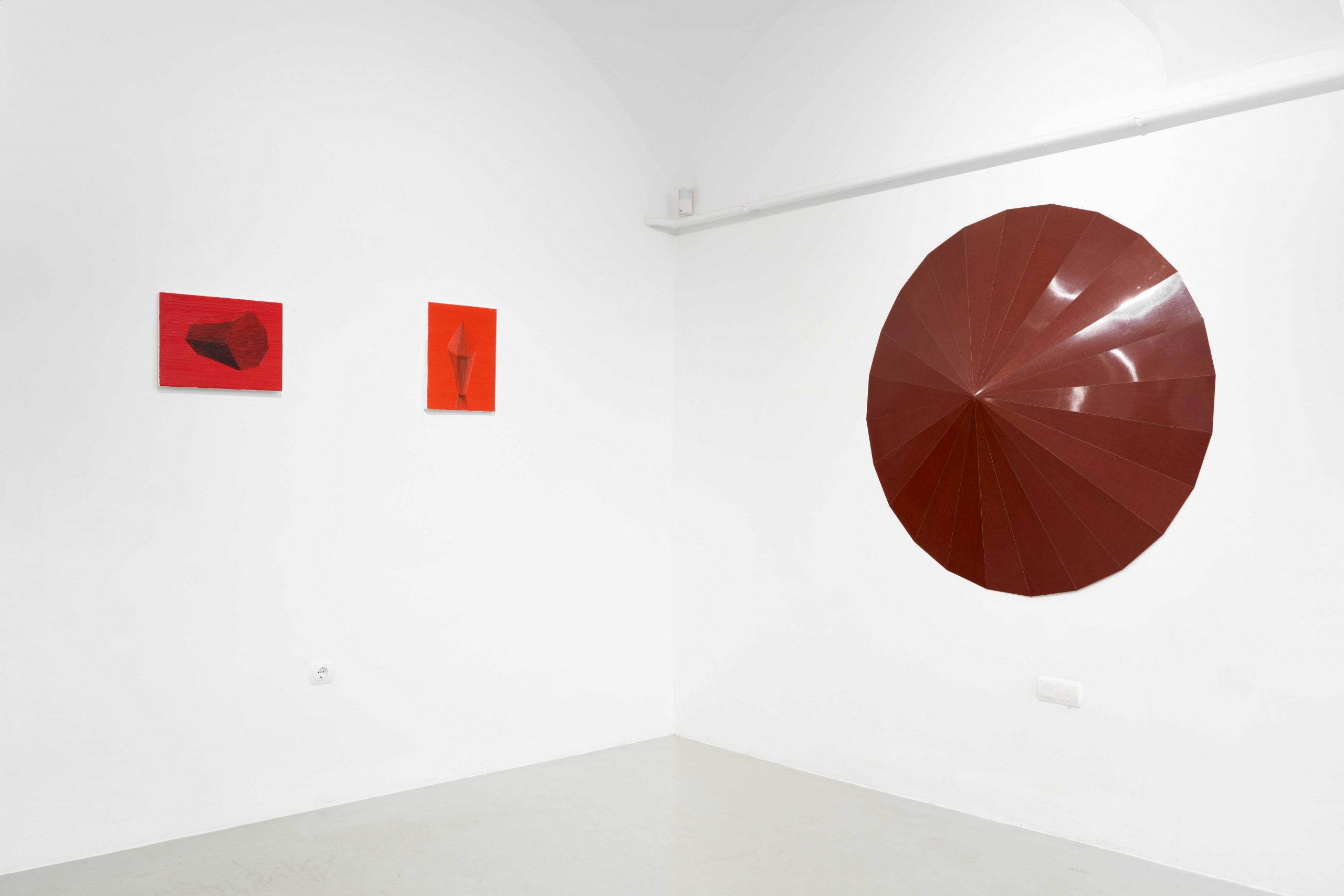 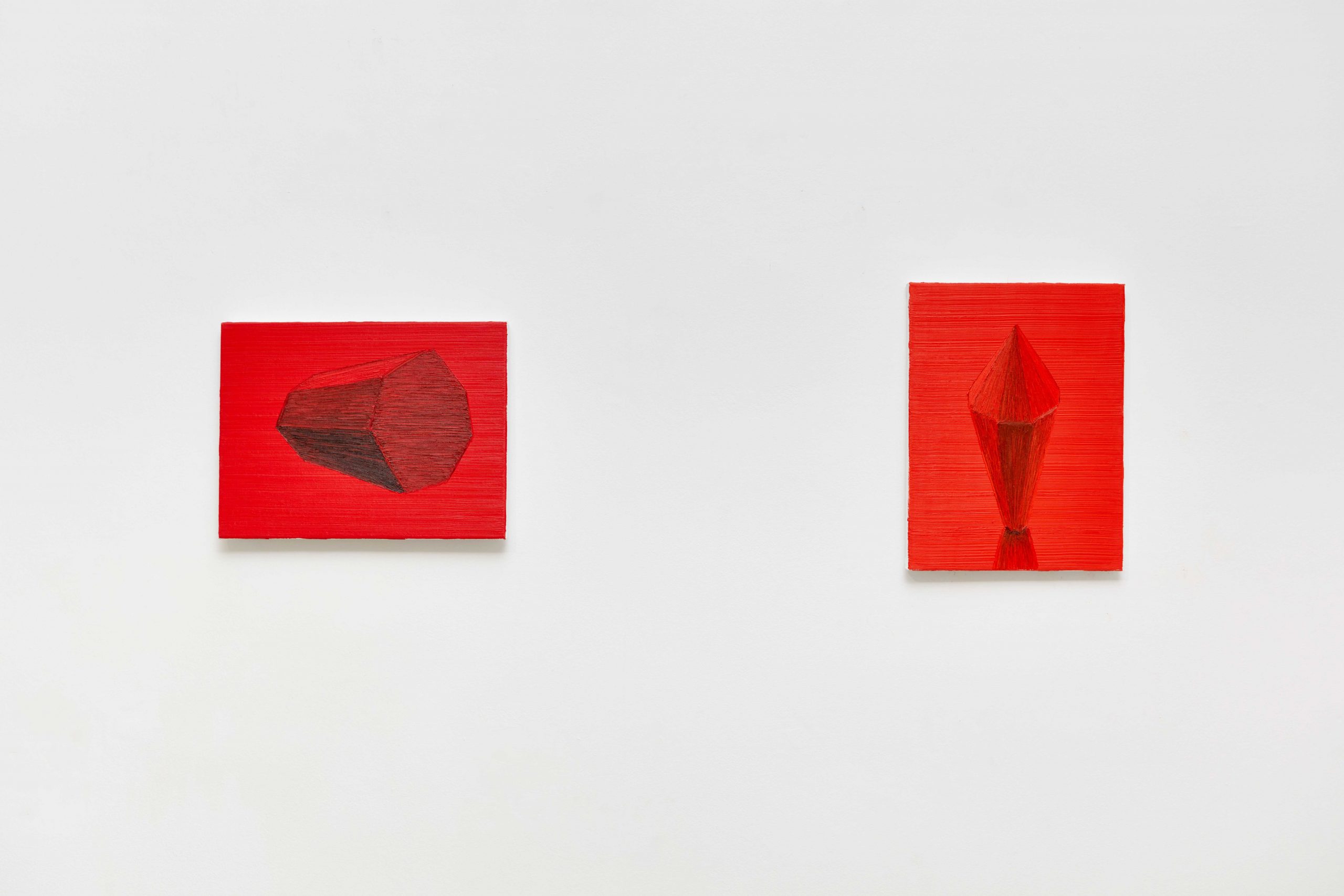 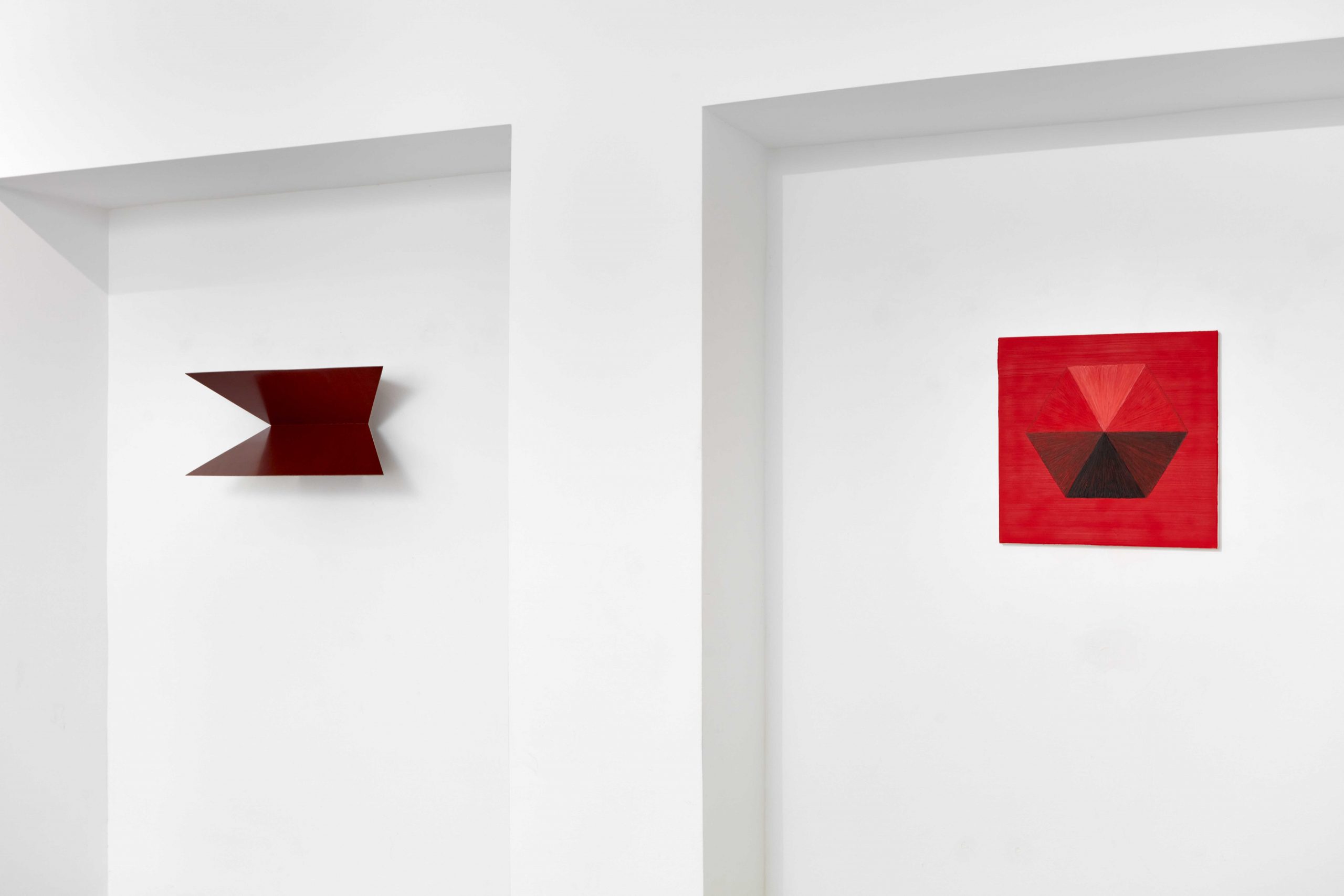 The numbers used in division, one of the four basic arithmetic operations, are termed the dividend, the divisor, the quotient, and the remainder. Besides naming the numbers involved in the operation and using them in a formula, there are times when all we want to ask is: what are we dividing by what? As a mathematical equation, the almost self-evident answer is that what we are dealing with are numbers. But then, we may ask: what kind of numbers? What is the dividend and what is the divisor? And will the quotient be a whole number, or will there be a remainder left over?

Katalin Káldi’s oeuvre, which she has built upon with extraordinary consistency, is linked by multiple threads to numbers and arithmetic operations. As Dávid Fehér expressed it in his brilliant essay written in 2019 in connection with a previous exhibition of Káldi’s work, “I often have the feeling that what Katalin Káldi does is nothing other than counting in space and in the plane. Consciously and subconsciously she moves from one number to the next: 1, 2, 3, 4, 5, 6, from the numerous to the innumerous, from the finite to the infinite, from the measurable to the immeasurable.”

Her numerical sequence and her related radially and axially symmetrical forms have hitherto omitted the numbers 7 and 8. To date, these two numbers have only appeared in the artist’s doctoral dissertation (which was also issued in print in 2020), entitled The Numerous and the Innumerous, with the subtitle Repetition; the multiple application of homogeneous elements in a single artwork. In her theoretical work, Káldi, backed up by research verified by experimental psychology, refers to these two numbers as boundary numbers, that is, as quantities that people can still perceive divided into their elements or groups, rather than seeing them as a unified, undivided mass. To illustrate this inscrutable aspect of human perception, Káldi reached for a still life by Cezanne [KSJ1] depicting 7 apples, which the viewer cannot help but see as 2 groups of 3 supplemented with 1 apple standing alone.

In the present exhibition, both boundary numbers, 7 and 8, come to life. In fact, they not only come to life, but also slumber into “units”, spatial forms constructed upon fragments of memory, painted figures, and “landscapes”. With regard to the shapes, Káldi maintains her earlier compositional principle, by which the spatial forms and the painted (photographed) shapes are structured by vectors that radiate from one single point or can be merged into one single point, in such a way that the figures ultimately aim at unity or oneness.

The first of the exhibited works that may catch our eye is Tower, which can also be regarded as one of the focal points of the exhibition and the pieces on display. Compositionally the figure is arranged around a single point, but by raising the octagonal base into a vertical column, Káldi also targets a further objective, namely the spatial connection between above and below. As she writes, “The tower connects the up and the down”.

But what is up (above) and what is down (below)? If we read the artist’s own text, specially written for this exhibition, then the answer immediately becomes clear. Up and down is where memories reside. Below lie the depths of the Nottinghamshire coalmine that Káldi visited as an exchange student aged 16-17; she returned to the surface with a lump of coal given to her by a lugubrious miner, which she has kept ever since. In one of the exhibited photos, the almost regular hexagonal chunk of black coal can be seen reflected in the glass table of her studio on Százados Road. Her memory of the coalmine was jogged by a Zola novel she read recently, which describes the abysmal poverty of the miners of Montsou, their forsakenness and penury, their wretched and futureless romances, in grave but authentic, naturalistically written stories. Zola related the events in the novel on the doorstep of the English Industrial Revolution, which brought about such brutal social, economic and technological changes. This historical context provides a link to the material Káldi used – for the first time in her career – to make her recent models: Bakelite, the first industrially produced, synthetically generated plastic.

Káldi’s text also informs us of what is above: this is the 2352-metre-high Red Tower Pass, a popular mountain pass in the High Tatra mountains (known in Slovakian as the Priečne sedlo), and also the highest point in the world that the artist has ever visited, an occasion alluded to in the canvas entitled Red Tower Pass.

The imaginary spatial forms that are associated with the “missing” numbers 7 and 8 are therefore based on actual forms and experiences: the hexagonal lump of coal retrieved from deep down in the mine, the splendour of the high mountain pass, and the reality of the Tower connecting the depth below with the height above.

Káldi’s creative practice is characterised by the fact that she is never satisfied with an apparently obvious answer. It is not enough for her to express a single statement, as the defining driving force of her art is doubt. She cannot rest knowing that she has approached only one of the possible options, for example, the possibility of what transpires when a “tower” connects the up and the down. In her train of thought, the possibility also occurs to her of what transpires if it does not connect them. She feels a visceral compulsion to find out what happens if the up remains above while the down remains below. They both remain alone, independently, on their own “horizon”, and in the form of straight lines they continue to divide space. What is left are Two Horizons, each independent of the other, two straight lines that never meet, running parallel to one another above and below. The parallel horizons become and remain each other’s echo, although the double structure could also be the mirage that awakens doubts.

Fluctuating between the possibilities of unity (oneness) and doubt (twoness), there is only one state, the definition of one’s own circumstances, that can help to achieve stability. The most valid point of orientation is the designation of oneself as the baseline. Káldi proceeds in this way. She stands at a point, somewhere in the space demarcated by the up and the down, and by making “windmills” with her arm, her shoulder acting as the point of a compass, she describes a circle around herself with a diameter of 140 cm, the radius determined by the length of her own arm. Carving out the invisible coordinates of space, the given physical properties of her body draw a radially symmetrical figure (a circle). Here I would like once more to quote from Dávid Fehér’s essay, where he writes about the concept of oneness: “The basic form of oneness in Katalin Káldi’s art is the circle. Around a point with no dimensions, she draws an infinite number of points. The circle is but the sum total of an infinite number of edges. The unity of a circle shape cannot be broken without its deterioration.” In the case of New Shield, with its 140 cm diameter, Káldi herself is the basis of the circle, its indivisible and unbreakable oneness, which exists in space without any remainder.