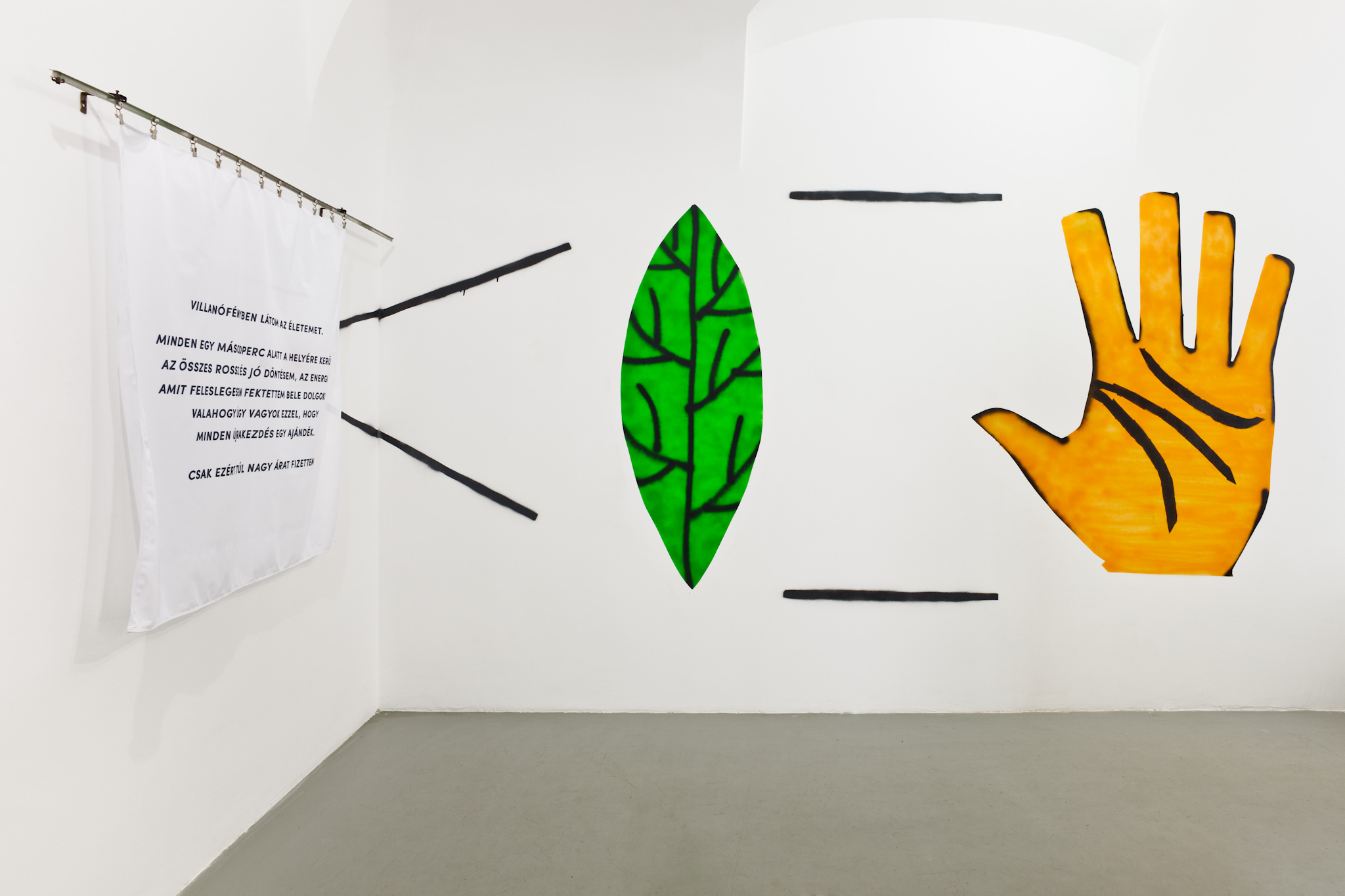 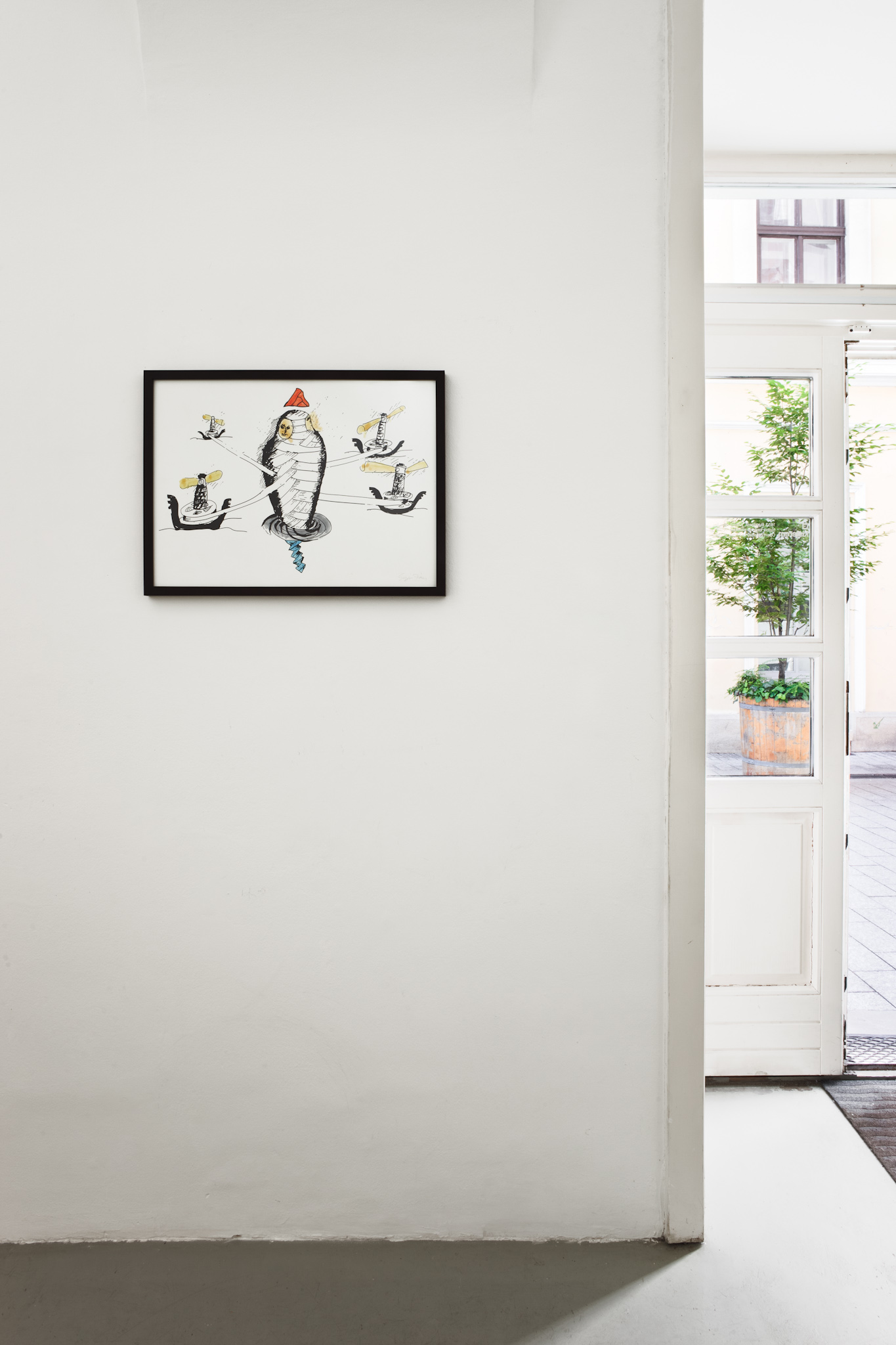 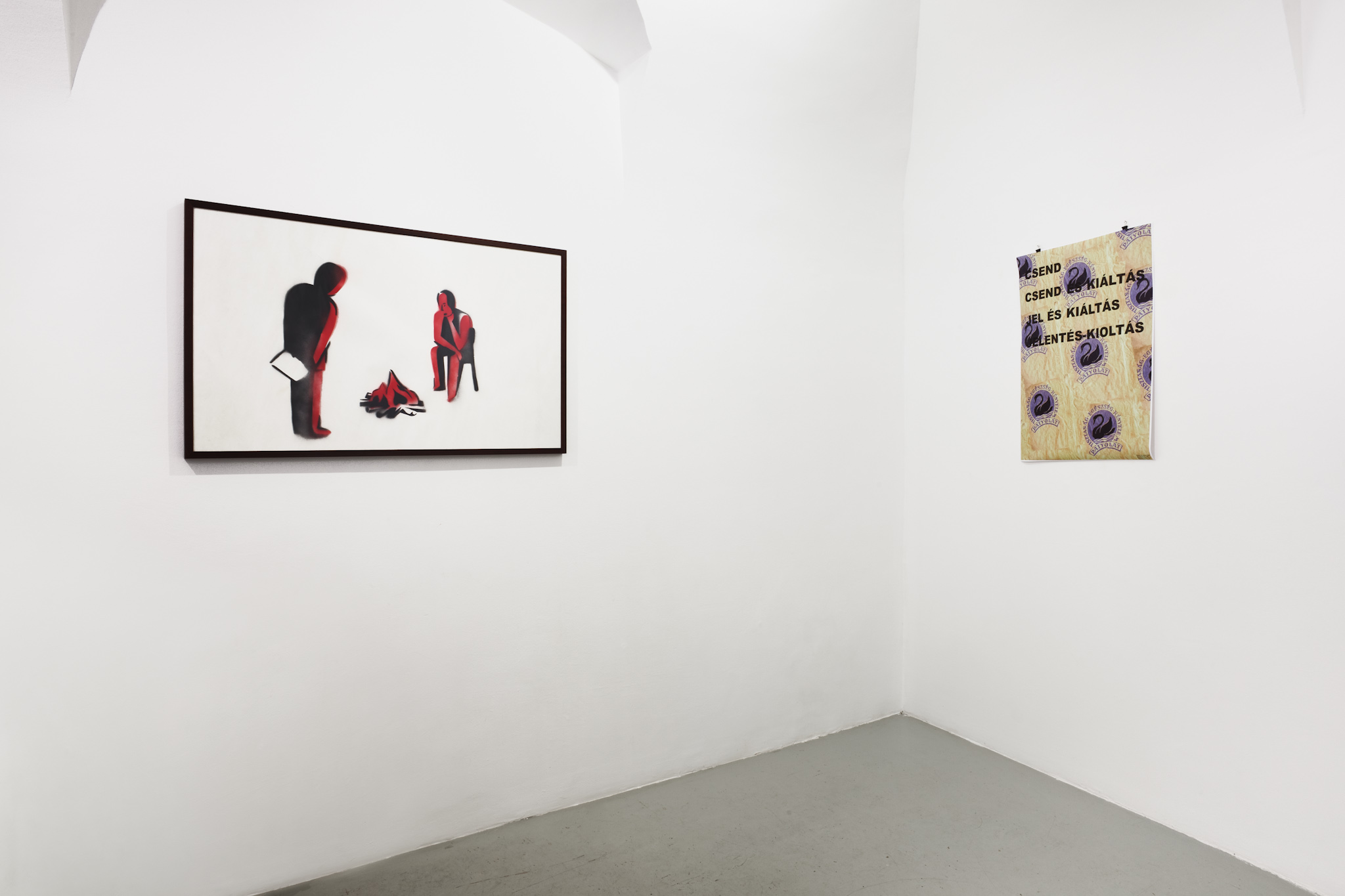 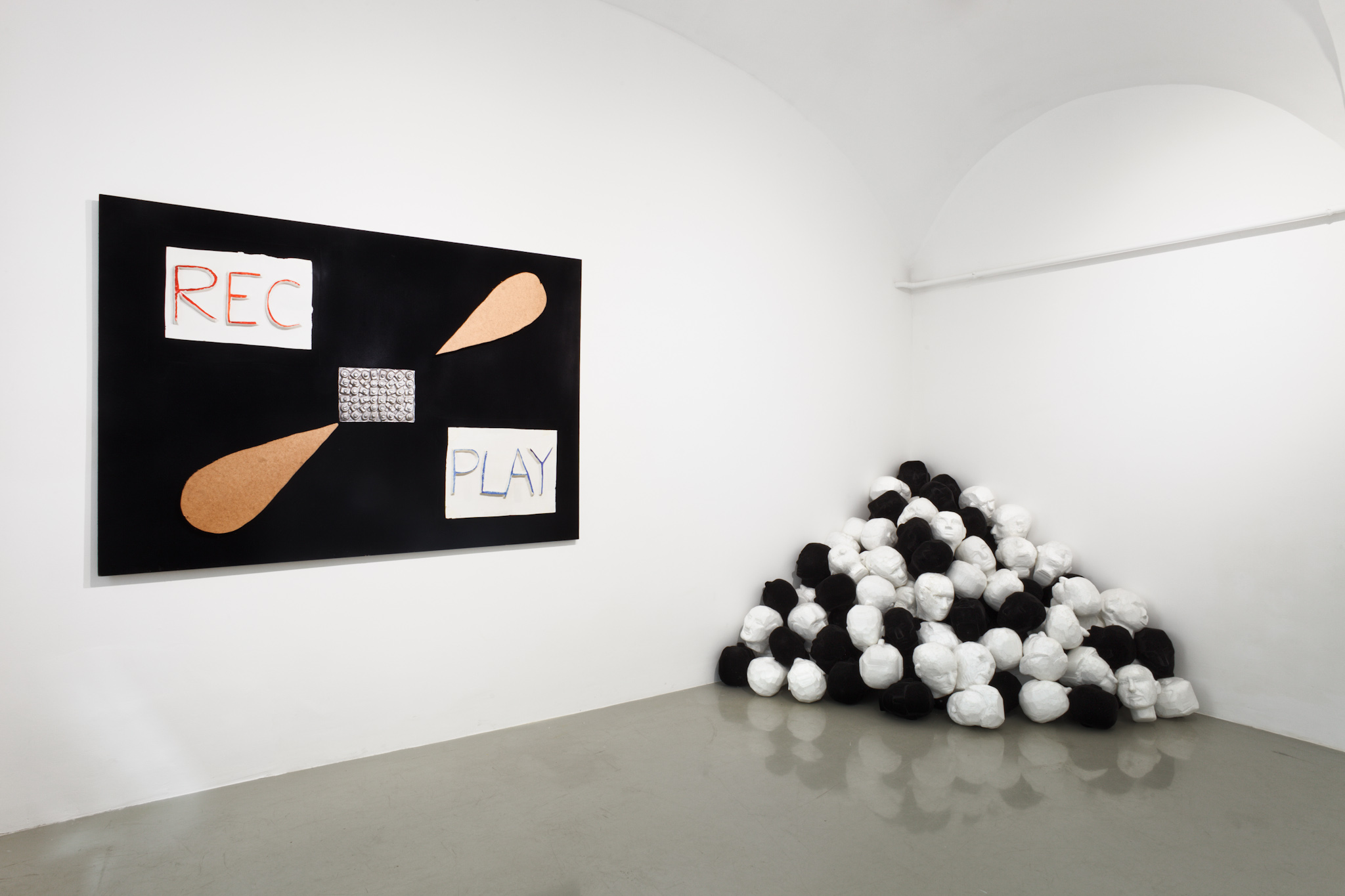 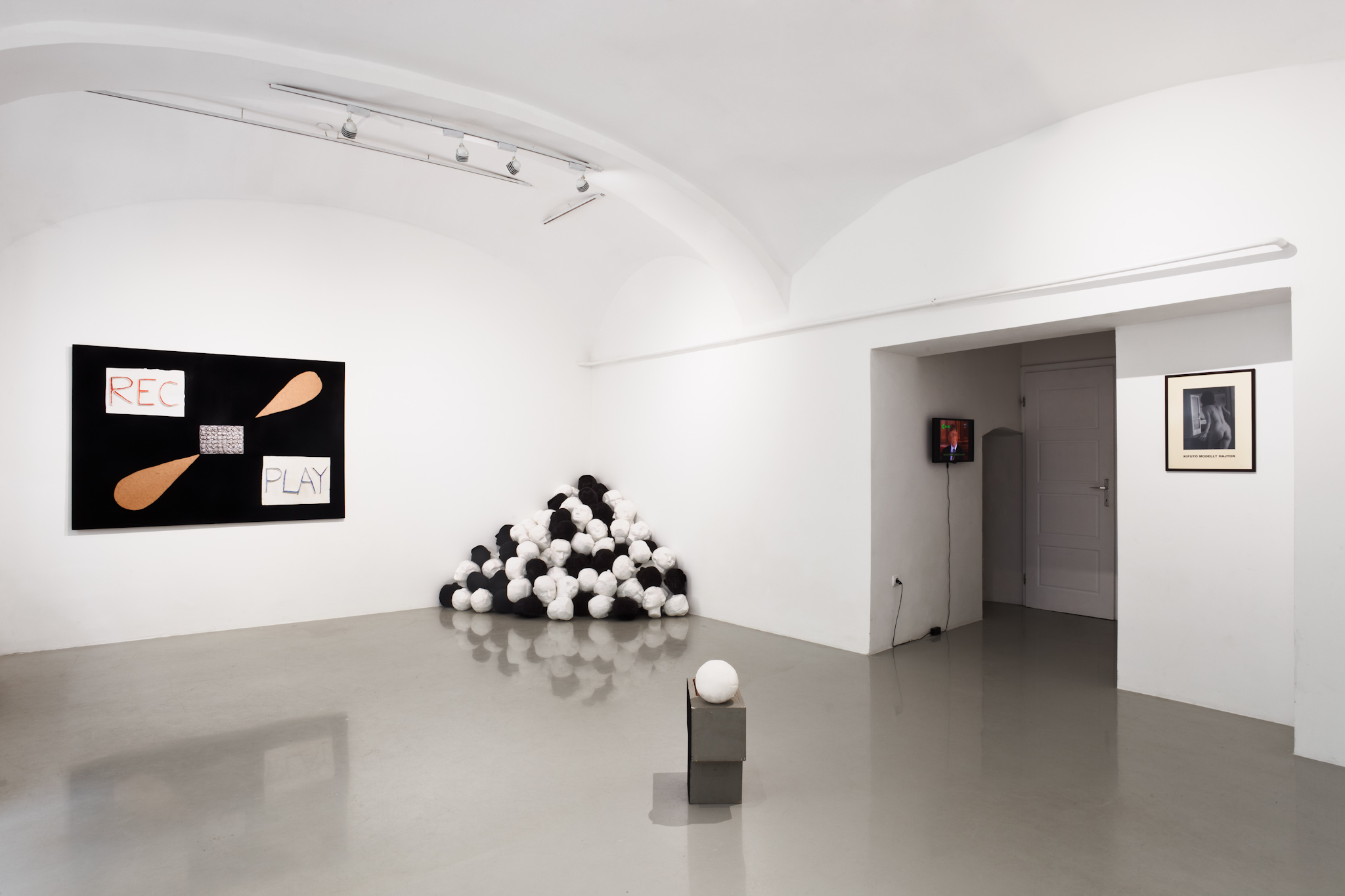 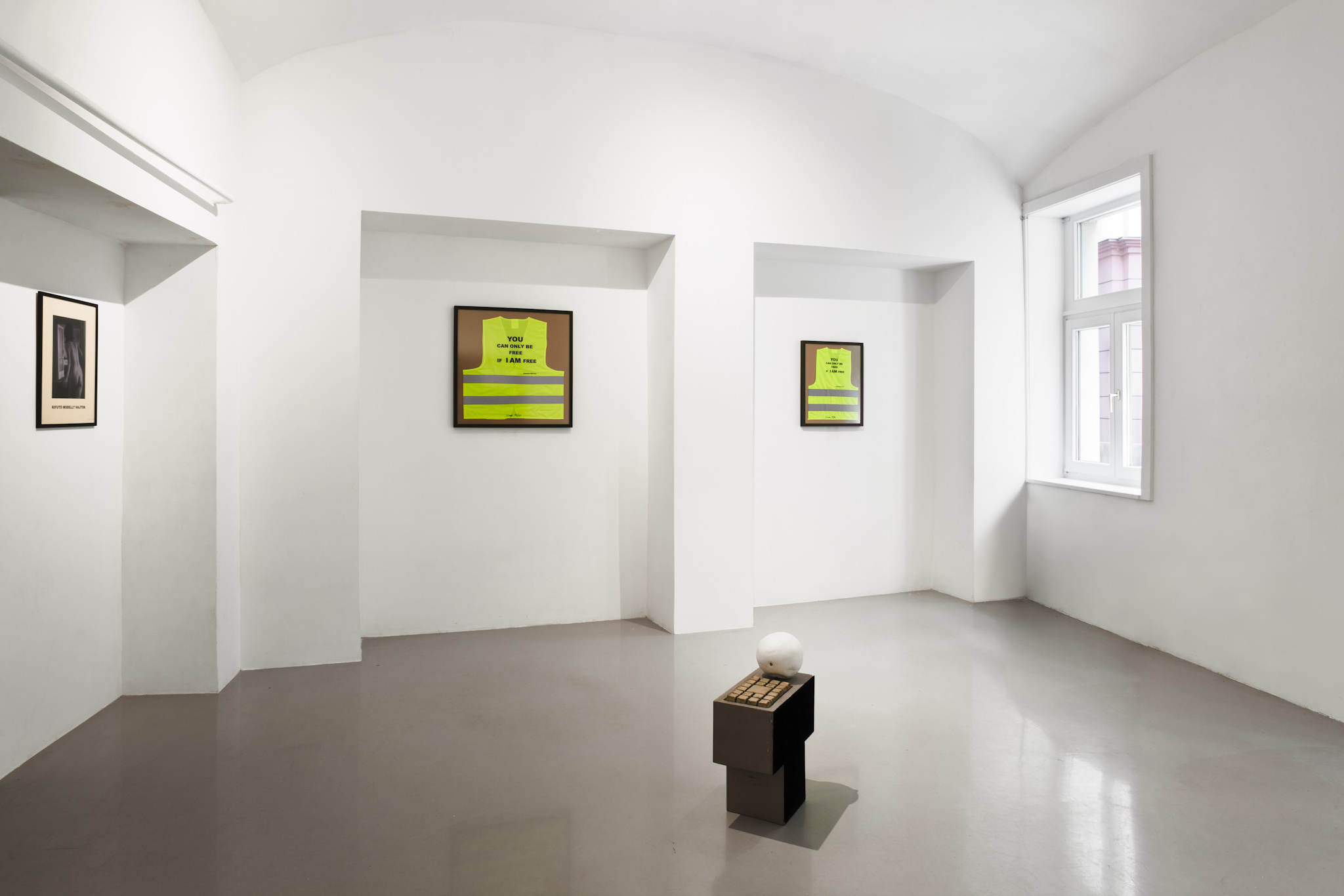 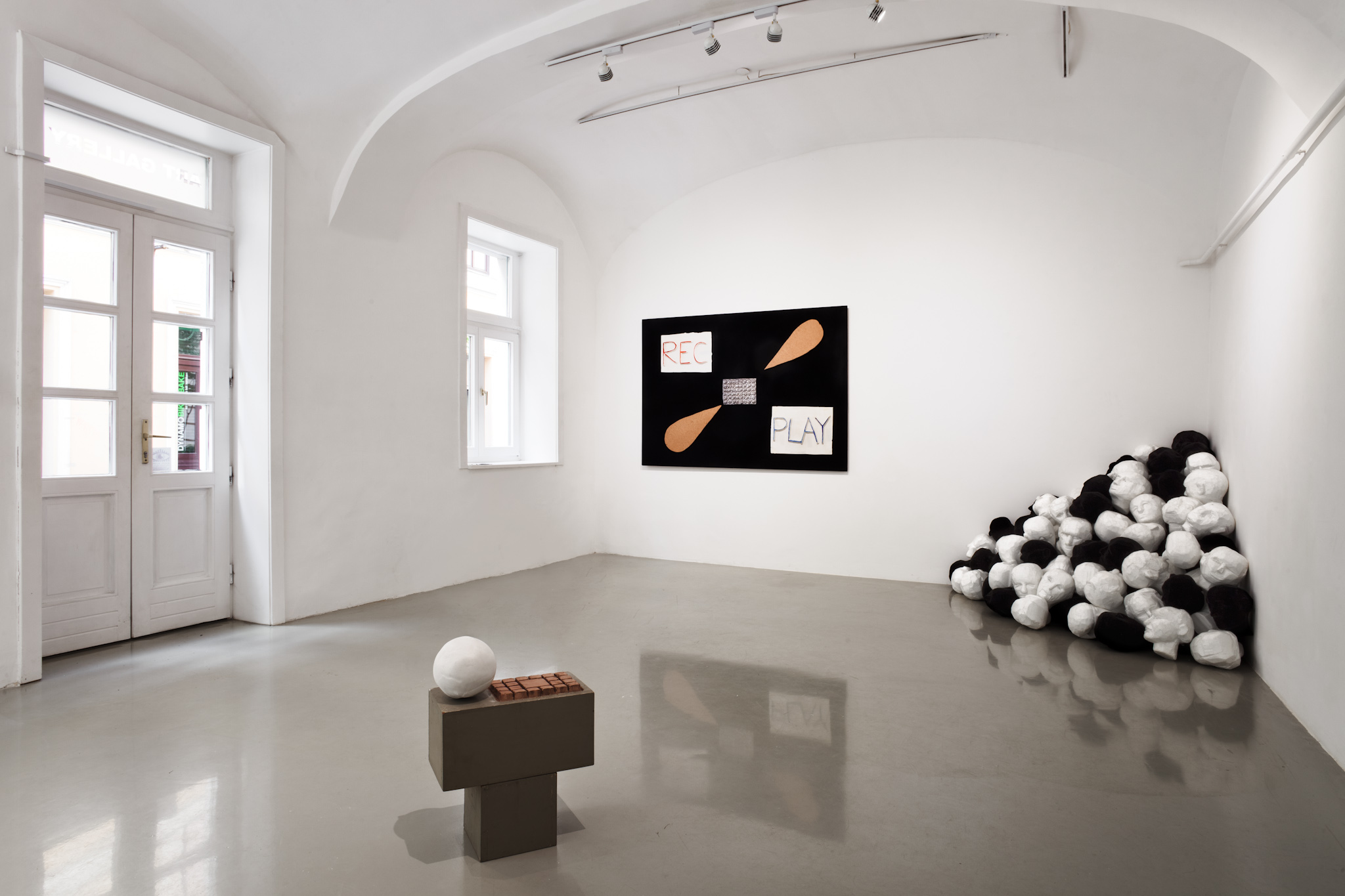 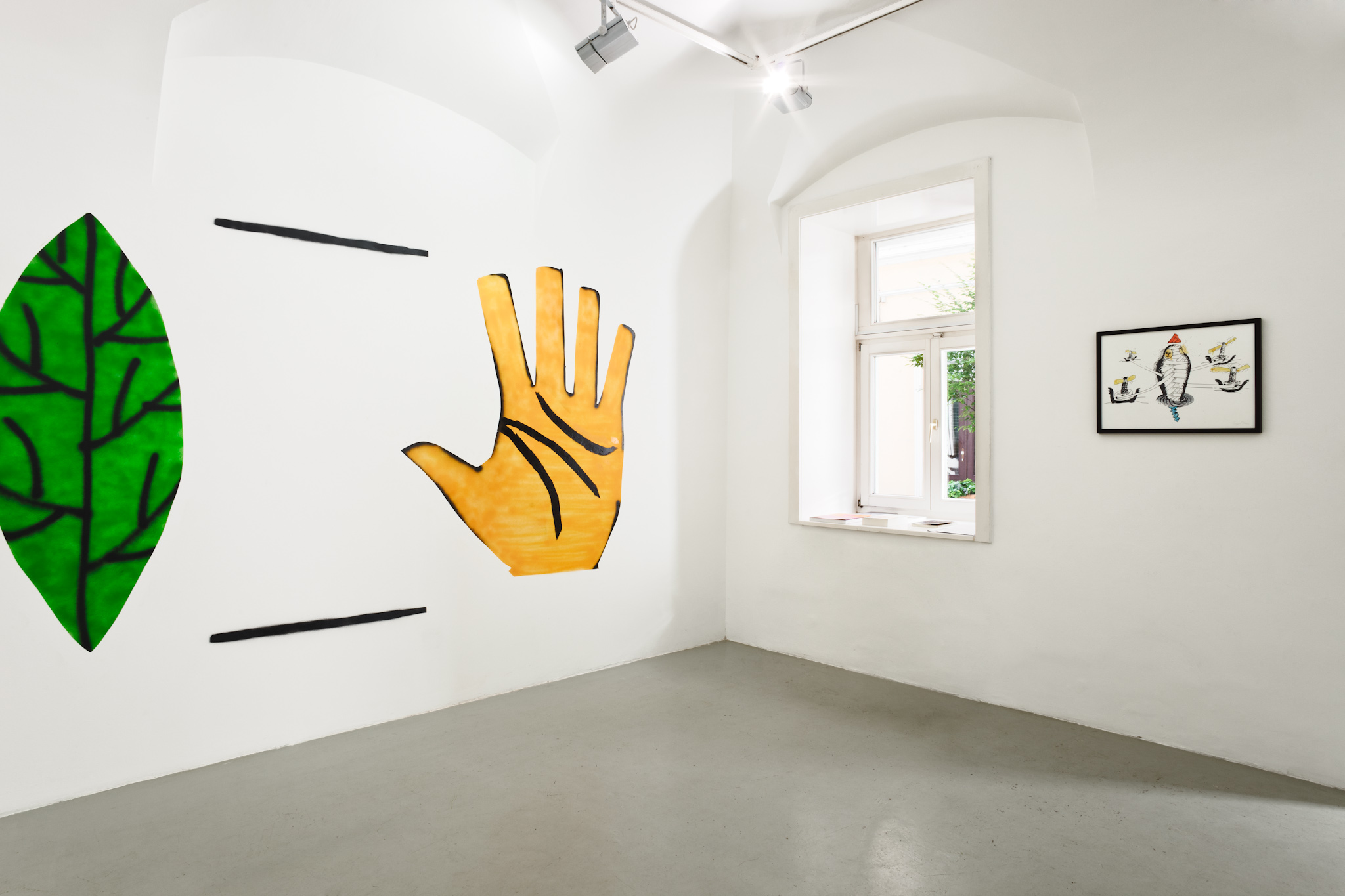 One must think about the fire – this is the title of the recent exhibition of János Sugár, and two of the displayed pieces have the same title, as well. The sentence might be understood as an authorial guidance, but it is stronger than a simple suggestion. It determines the direction of attention fairly aggressively. It has always been an important series of questions for Sugár that for what and how much we pay attention, especially in his teaching practice, but the topic of paying attention and alertness appear indirectly in certain works of his. This present directness and naturally the communicated message lead us to the first suspicion regarding the exhibition.

The pieces displayed in the exhibition show a varied picture considering their time of creation, theme and medium. They resist clear interpretation both individually and together, so what they really have in common – beside their maker – is this uneasiness caused by the vagueness of decoding. There are reliable references from the artist, but suspicions might be articulated even without knowing these.

One must think about the fire refers to Miklós Erdély’s work, entitled Crystals of Libel – One Should Reflect on Artificial Fertilizer that was displayed in Tendenciák (Tendencies) 1970-1980 exhibition series, the part organized by László Beke in 1981, at the Óbuda Gallery of the Capital Council. The three pieces are similar because such everyday incidents get highlighted in them – on demand – that are so insignificant on their own that they are hardly visible, only their indexical signs are perceived: the efficiency of the fertilizer mixed in the ground, the smoke, the warmth, the light of the flames (see: One must think about the fire, 2017, stencil in frame). Erdély, by combining the fertilizer crystals and other materials, illustrated a problem of political theory; Sugár proposes one of a theory of knowledge. We usually do not think about the fire burning in front of us, the warmth, the light and the crackling helps one to get to a state of daydream, the focus of which is hardly ever the fire itself. The point is not to shut down but to achieve a state of active attentiveness, which in the case of the Fire in the Museum project is ensured by the responsibility of the position of the guard of the fire. The mural painting that is curtained off in the exhibition (One must think about the fire, 2017-2018, mural painting, curtain) works differently. There is a flow chart-like drawing on the wall (fire – leaf – palm). Reading from left to right: the light of the fire transilluminates the nervure of the leaf that is projected onto the lines of the palm, the so-called fate lines. The whole thing is like an infographic, which explains with visual tools the process of analogy making as an interpretation mechanism. The drawing is covered by a curtain. The text written on it is a quotation from E.L., from a situation the importance of which is granted by the objects destroyed in the fire, and which in the same time is the most extreme case of the unnoticeable nature of the fire (house fire). The “getting unambiguous” expressed by the text is the prerequisite of the analogy making, but in the same time it highlights the fact that the whole process works both forwards and backwards. This is closely connected to the print entitled Csend/Silence (2016, C-print). Here Sugár colours the swan on the wrapping paper of Patyolat (used to be the name of the Hungarian cleaning service) black and by this evokes black swan theory, which deals with the retrospective formation of the relations between extremely unreal events. This means the situations when the analogy is reversible (palm – leaf – fire) and which is simply called destiny. Reference of extremely unreal occurrences here can be several things, for example that the authors of the titles written on the print, referred to in the lower right corner, influenced each other in this exact order, or it can be the house fire.

The video work that can be considered to be one of the pieces that lead from one room to the other is the Hungarian piece of the MUTE series (2005). The series shows the pre-election television debate of presidential candidates from several countries – Hungary, USA, Germany, France, Italy, Poland and Romania – without sound, with subtitles. This way the politicians tell different jokes put in artistic context to each other. On one hand TV broadcasting presents the mass media, i.e. the television, which replaced the central position of the fireplace and which became fully accepted by the end of the 20th century. On the other hand this piece reflects on the fact how strongly the text – be it a title, or a later applied inscription – can raise and distract attention. It is especially true in cases of declamations, easily understandable and sensational constructions, like the “ten most popular,” as it is seen in the title of The demons of the ten most popular politicians (2007, installation), connecting a suggestive reference to the pile of life-size polystyrene heads, lying beneath it.

The work entitled High-visibility Vest with a Quotation from Clarence Darrow (2017) is in the second section of the exhibition. If we took the official and accepted tools of raising attention one by one, than the safety clothing with light-reflective stripes would be among the first ones. The case of the high-visibility vest, however, is not so simple: when used, in most cases it only signals that there is a person wearing it. On the road only the double line of light shows that a person is riding a bike, directing the traffic or going to the school, etc. What is written on the vest usually remains unnoticed. Sugár’s work was created within the scope of the a project realized in Molenbeek quarter or Bruxelles, entitled Reports from Badlands, and became part of the closet of people living there after the public action. The most densely populated part of the city was declared a no-go zone because the authorities considered it to be the central point of the realized and failed terrorist attacks. Sugár reacts to this situation with the 1920 text of the renowned-infamous Clarence Darrow, who fought for civil rights, and was once a star lawyer, according to whom liberty is only possible if we always pay attention to the liberty of our fellow-men.

The piece entitled A felvétel lejátszás ( A pünkösdi múmia kibábozódik) from 1987 might be considered to lead through from one room to the other, and similarly to the mural painting it is also a kind of a flow chart. The drawing in the style of the comprehensive sketches created for the Böröcz-Révész performances depicts an associative chain of themes that concerned Sugár at that time, which seems as if it projected a vision of a video work. The tape bound to four reels, the screw shape suggesting twisting movement also strengthens this vision, and even more, the mummy also thematizes the present problems of conservation of the carrier.

In connection with this, a quasi-video piece, one that has more meaning, the readymade that has the I RIDE AN OUT-OF-DATE MODEL written on it (On Postcontemporary, 2017), and which originally was created for the PostContemporary group exhibition organized by László Beke in Telep Gallery in 2017 as the critique of the show. Sugár there and then challenged the validity of postcontemporary, at least in what he calls its illiberal sense, the one that was present in the conception of the exhibition. According to this, postcontemporary is something that after the postmodern era that considered new to be valueless, because of an anachronistic modernist nostalgia wants something new despite of all events that has preceded it. The inscription might refer to the timeliness of the material, drive and of course message of any video works that was recorded on for example to VHS, beta cassette, or any other medium outdated by now.

In this context, the Zaj a rendszerben (1997/99, object) might be understood as a sculptural representation of a video loop. In the center there is an incident might be regarded as a model like the fertilizer or the fire: the negative of a bonbon holder molded from aluminum. The object that was originally designed to function as a holder, because of the molding becomes an architectural model-like sculpture, which in Sugár’s interpretation is a “spontaneous world model.” Maybe the noisy parts of the video tape and its return at every play is displayed by this picture that basically also falls out of attention to such an extent that we define it as an error, a mistake. Beside the sculpture, placed diagonally, there are drops facing each other, forming an eight that signs the loop, the noise that keeps returning.

The Zaj a rendszerben was created in the same period as Ultima Irratio (1998, installation). Ultima Ratio Regum was the name of the largest cannon of Louis XIV of France, which was called the most effective means of “reasoning” that was saved for the last. Displayed together with the previous pieces, especially with MUTE, the installation might refer to that by today television became the most effective means of persuasion, which has the same radius but might be a less expensive weapon than the actual arms. The Ultima Irratio together with the architectural model-sized bonbon holder molded of bronze and with the seemingly huge white globe standing next to it would not get connected to the television on its own, but indeed it would with fire. As the endpoint of the exhibition it models the outbreak of the hardly justifiable nuclear world war that goes together with the oppression of human rights.