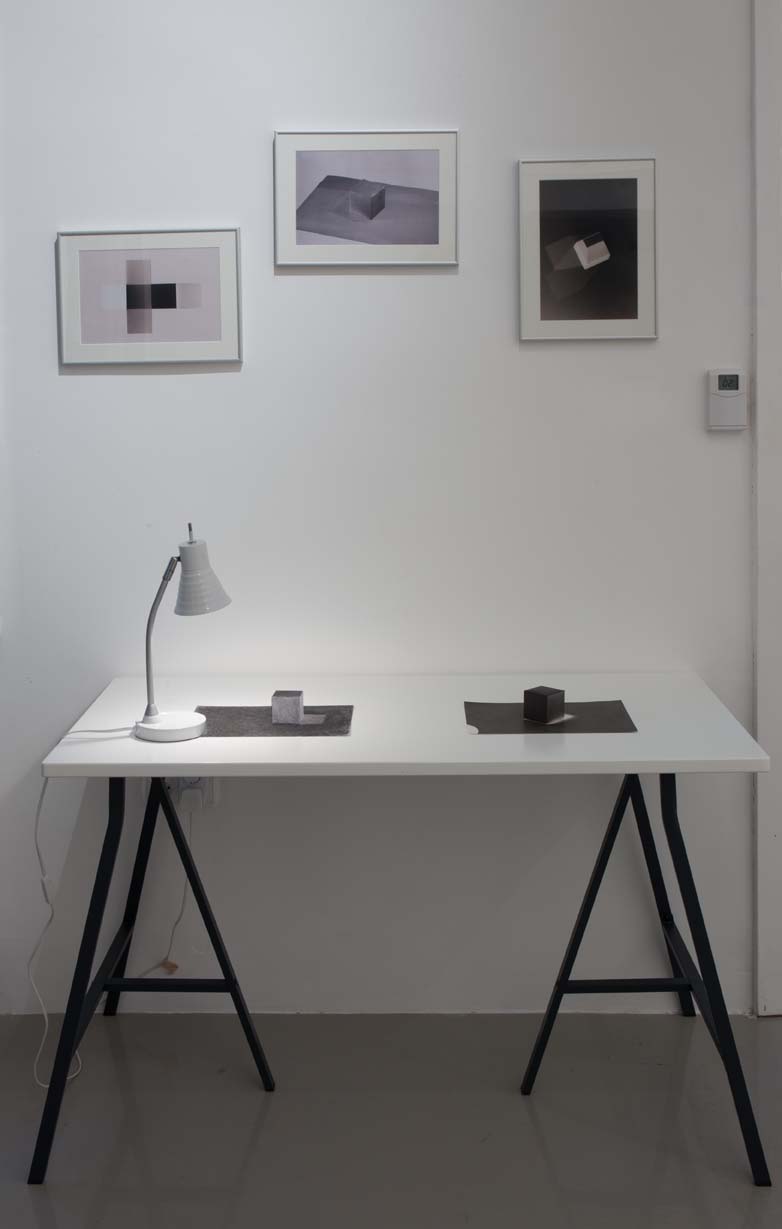 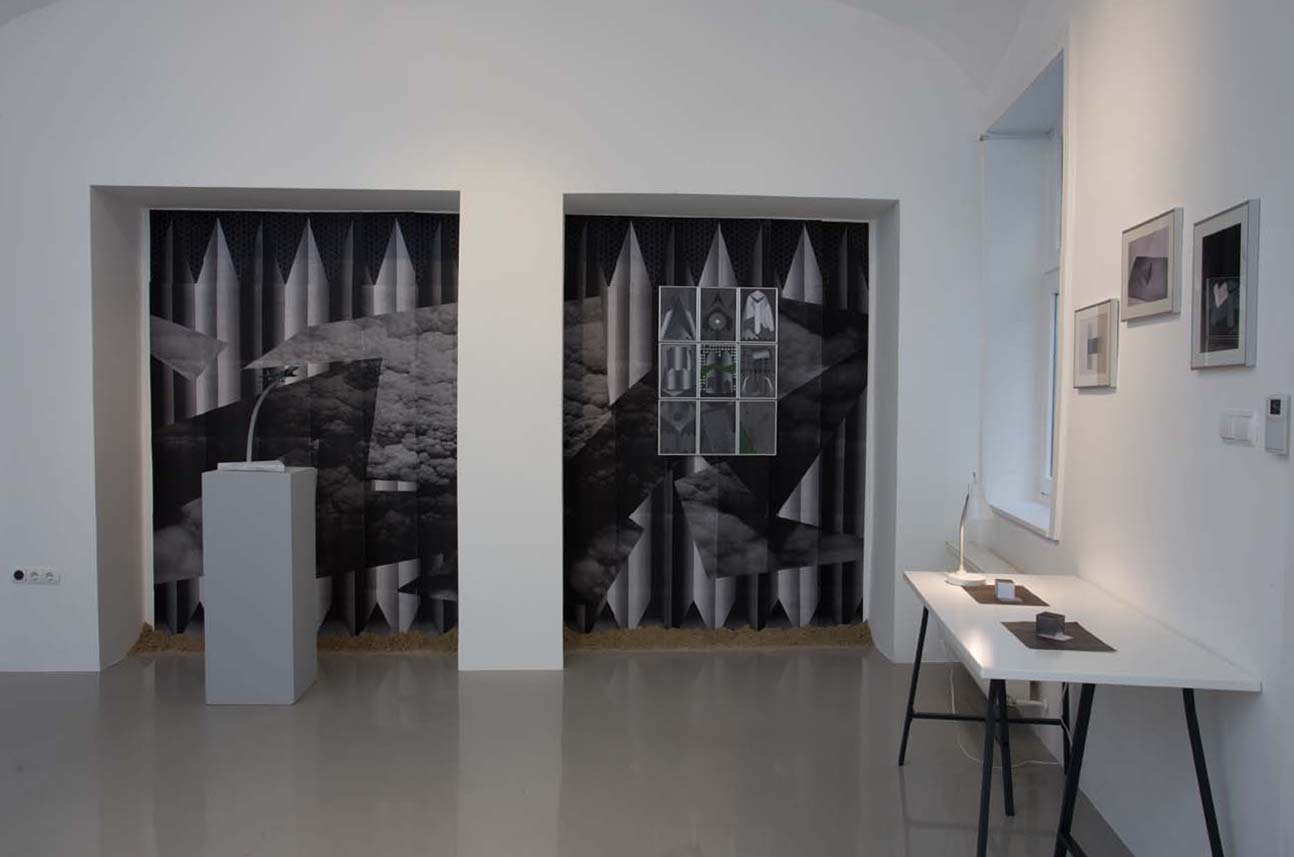 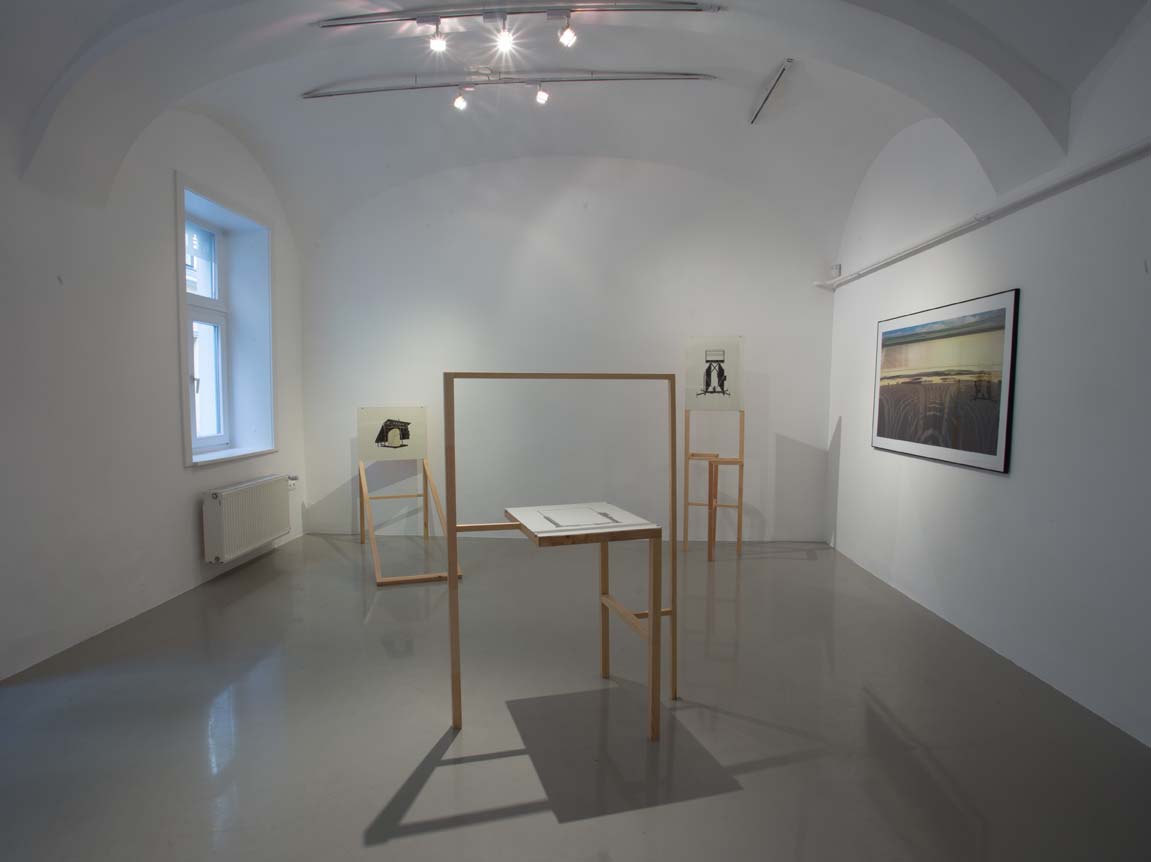 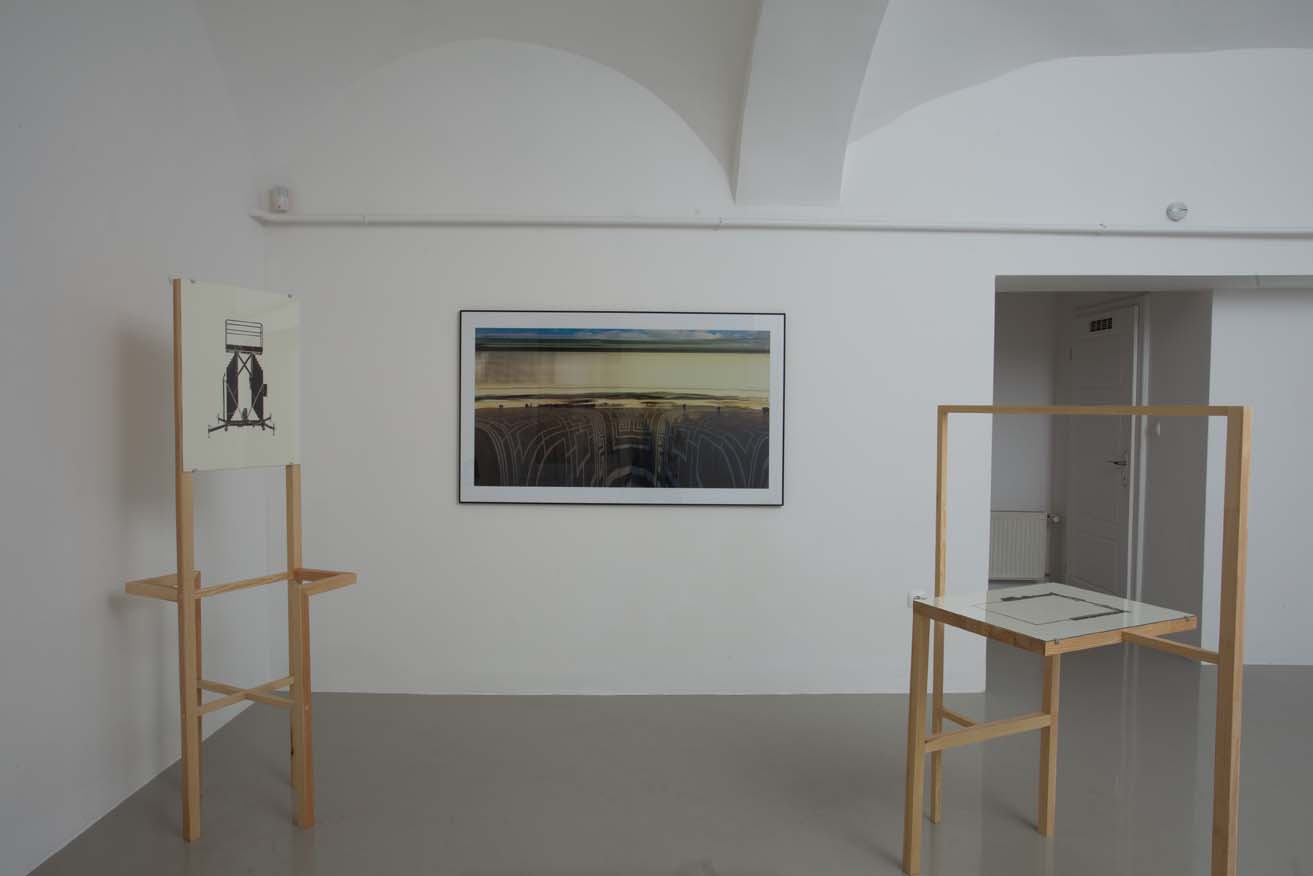 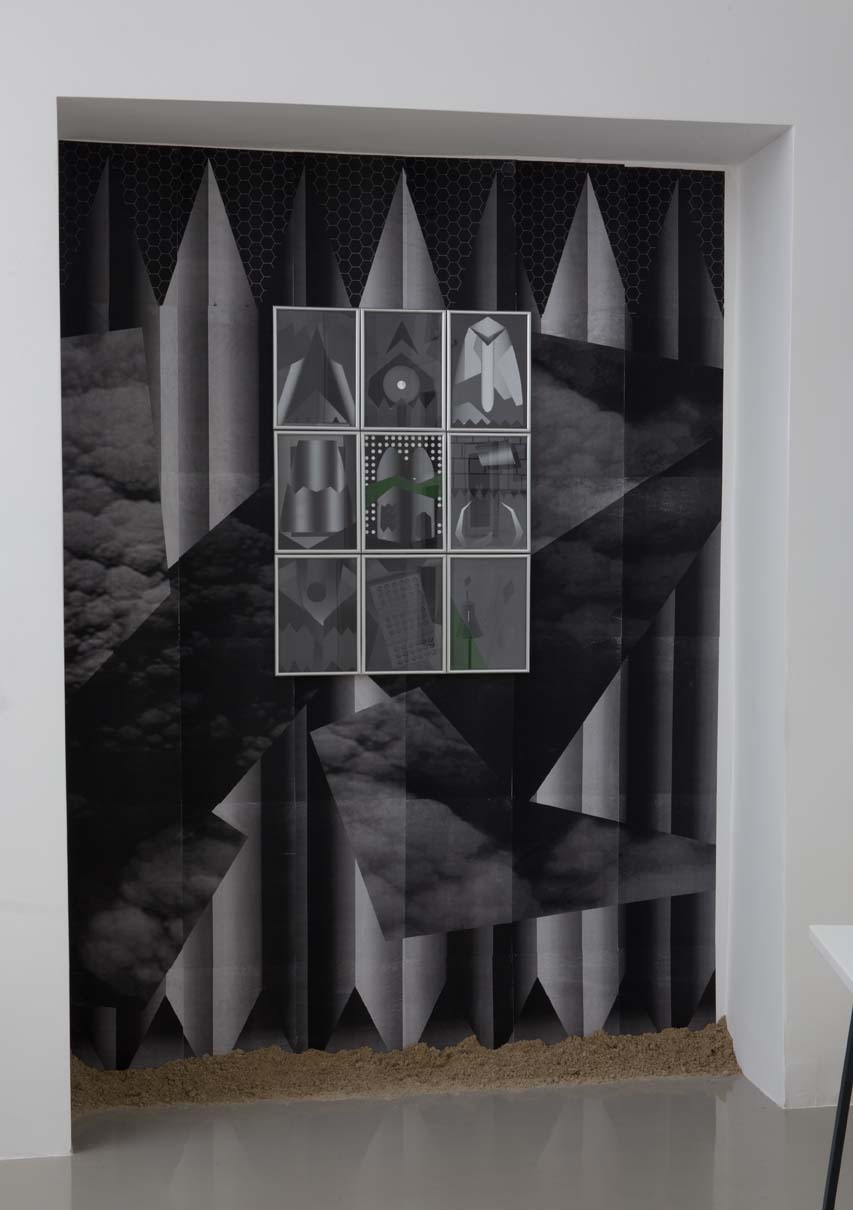 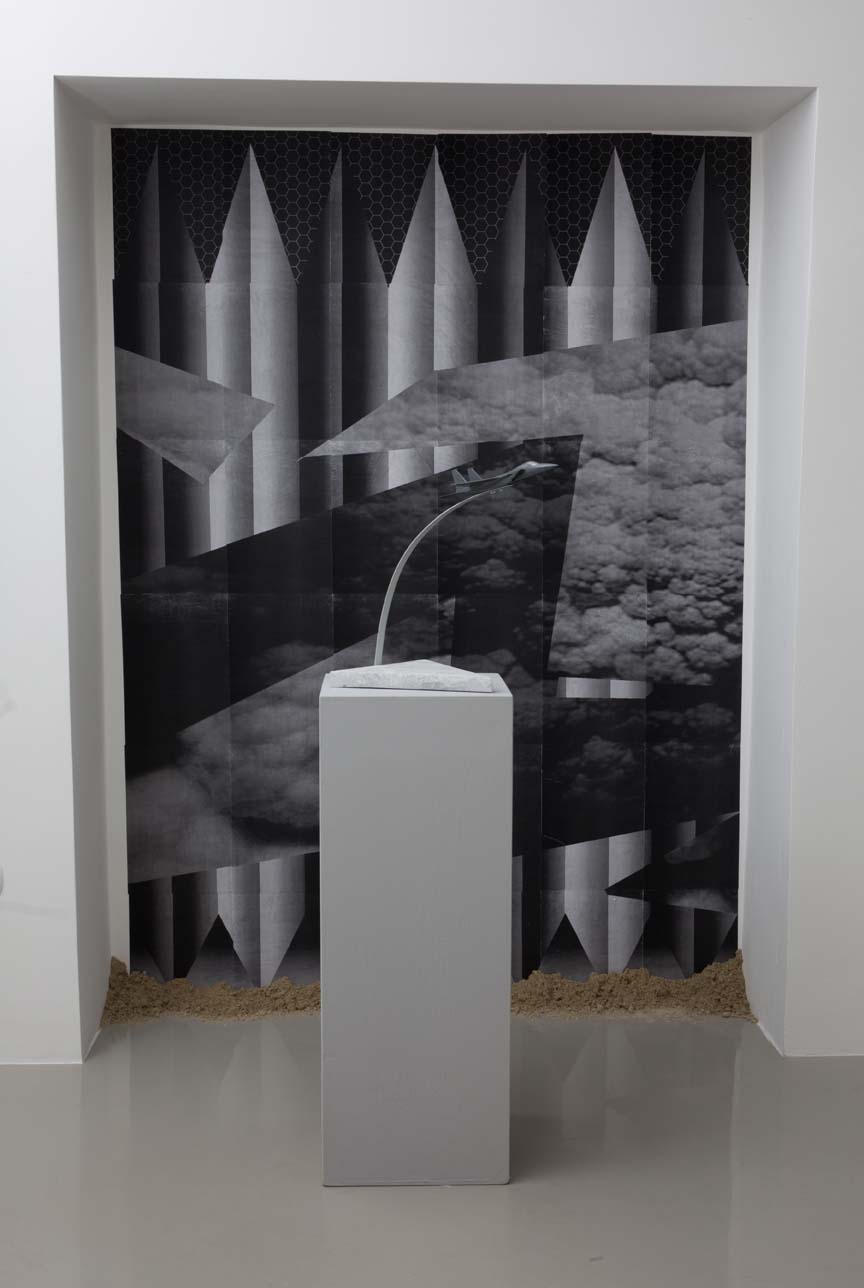 INVERSE is an exhibition of works by three artists, debuting at the Kisterem Gallery. As members of the youngest generation, all three artists have adopted a post-digital attitude in creating their reduced pictorial surfaces. Each of the works on display is inversely related to the object it replicates, to the aesthetic vernacular of its associated precursor, and to perspective.
Márk Fridvalszki’s series, collectively titled “Hagere Geometrie”, consists of conceptual collages inspired by 21st-century high-tech military industrial aesthetics and innovation. The most emphatic elements used in the series, which draws from corporate industrial and alienated technocratic design, are arched forms, barbed, metallic shininess, (aero-)dynamic lines, and grey tones that are kept in an apparently neutral state of transition between black and white. Adding a sense of contrast to accompany the lifeless, devitalised hues of grey, there is the occasional geometric green surface, alluding to living and thriving nature. However, making its presence strongly felt as part of the series is an F-15 fighter-bomber aircraft, one of the hi-tech military machines used during NATO’s interventions in the Middle East. In the alcove, papered with a scene of a barren landscape, the silver-framed collages suspended on the wall like an installation of solar panels, together with the statuesque model of the fighter jet, conjure up the impression of the interior of a tycoon’s office, with a view over an apocalyptic desert. The visual language of Fridvalszki’s illusion, which wavers between utopia and reality, recalls the geometry of the boundless futurology of early twentieth-century Constructivism and Suprematism. The same is true for András Zalavári’s laboratory of cube experiments.
Zalavári’s black-and-white par excellence works of cubes floating in horizonless spaces, reminiscent of Moholy-Nagy’s photography from the early twentieth century, explore the experimental possibilities of making images. The situative circumstances that are intended to provide insight, however, do not in any way enlighten us about the actual order in which the images were created, for even after lengthy contemplative analysis there remains uncertainty as to whether the photographs are pictorial renderings of the experimental cube arrangements drawn onto the desk or folded out of photosensitive paper, or vice versa. The viewer, oscillating between 2-D and 3-D surfaces, is brought no closer to the pictorial truth (or the truth of the picture) by the colour blow-up on the opposite wall. Next to the windows on one side of the space – those opening onto the ‘unheimlich’ fog of the portentous desert – the large image on the opposite wall is a panorama of Heroes’ Square in Budapest. In this colour photograph, composed from several thousand sequences, Zalavári uses two sets of perspective construction principles to deceive the viewer’s eye. The combination of simple (linear) perspective in the vertical and inverse (Byzantine) perspective in the horizontal results in a pictorial surface that captivates yet simultaneously marginalises the viewer.
In a change of scene from disorienting spatial perspectives, viewers can rest their eyes on Zsolt Molnár’s hyper-clear collage architectures. His spatially balanced objects operate through two- and three-dimensional representations of the architectures of real, functional tools. The silhouettes of the tools that appear in the collages, which are completely different with regard to their function and application (levelling device, telemeter, working platform), are empty spaces cut out of paper, and they come to life through the basic black-and-white geometric shapes that are placed one above the other on the reverse sides of the paper surfaces. The collages, created from millimetre-accurate paper cut-outs aligned atop one another, sometimes in five or more layers, are arranged as spatial installations, which offer modular pendants to the static structurality of the tools depicted.

The benefits and drawbacks of geometry

An affinity for geometry in the visual arts represents a dream of order, the irrepressible yearning of the creator-constructor, by which the chaotic visuality of the world can be expressed in a painterly way through rational structures. This kind of sensitivity, longing for autonomy from the gamut of human and material forms, was christened Suprematism by Kazimir Malevich – the sublimity of pure sensitivity. There are, of course, questions surrounding the social or perhaps religious ideologies that engender this particular sensitivity, as well as the nature (and motivations) of the people who, having sworn themselves to something invisible, wish to create order in the visible, for, after all, the spirit will never be driven out of art, although we must remain constantly vigilant that what we are dealing with is not, in fact, some kind of spectre, whose only desire is to violate matter in some obscene way. In other words, we must always examine the motives and motivations of the invisible; we must operate a kind of malicious archaeology, in order to be able to unmask order, because this is what the object of critical abstraction ought to be: the benefits and drawbacks of geometry in the interest of life.
It is in the light of the foregoing ideas that I interpret even the title of the exhibition of Márk Fridvalszki, Zsolt Molnár and András Zalavári, for the word “inverse” represents to me a proclamation of a critical practice, the programme of inversion. Inversion is not the removal and delocalisation of the visible, but nor is it some kind of counter-abstraction; instead it is an act of turning things around, turning things over, bringing the hidden contexts of geometric thinking to the surface, all the fractures, schisms and glitches that are generated in the tension between the dream of order and the actuality of seeing.
Viewed from an art historical aspect, the inverse perspective that András Zalavári uses in his optical and formal experiments is a reference to the visual conventions of Byzantine icon painting, in which the viewer is not treated as the focal point by Orthodox icons, but – through the supremacy of the sacred space – is rather “subjugated” and marginalised by them. In the print incorporating the visual impressions of Budapest’s Heroes’ Square, this marginalising effect is intensified, and the viewer is caught up in the maelstrom stirred into life by the picture, although in this particular cold collapse there is no sacral background. We are “inverted” out of the order of our everyday lives, but without being initiated into any alternative Order, for it is entirely possible that we have stepped into a multidimensional glitch, into a gateway of space whose psychedelic laws bombard our senses.
Zsolt Molnár’s paper cut-outs, made with the help of masking, reveal an array of tools (levelling device, telemeter, working platform, etc.). The paper forms are supported by installation-like structures made of wood, built up of interchangeable elements. The precise function of the tools, or the way in which they operate, cannot be exactly decoded (without prior knowledge), yet there is more at play than merely pure architecture. The world infiltrates the abstract system, incessantly “reminding” us of a kind of denotation of reality, so that the viewer’s sense of comfort is constantly disturbed, as we find ourselves unreconciled both in the nakedness of the geometry and among the specificity of the objects. A gentle pulsation emanates from all this, which lies between security and insecurity, and this is accentuated by the dual character of the material the works are made of, namely the plasticity of flux between the paper cut-outs and the wooden structures.
The exhibiting artists are united by a purified approach to form, which Márk Fridvalszki has elevated into an artistic programme, called, in his words, “lean geometry” (Hagere Geometrie). This leanness, though, is also an inversion of the puritanical tendencies of geometric abstraction, in the sense that it follows the strict principle of reduction only visually, while contextually “filling in” and “overloading” the purity itself. In Fridvalszki’s case, it is not possible for forms to be abstracted from their origins or from the way they are embedded in culture and technology, for the main source of inspiration for these post-digital collages is the aesthetic of industry and the military, meaning that the visual language is based on logos, weapons and aeronautical forms and surfaces. In this context, leanness means “degradation by depletion”, designed by the ruler of a post-apocalyptic world, in which the act of stripping things down to their internal framework and the fetish of metallic inorganicness are accorded meaning in a panorama imbued by “civilisation criticism”. The over-riding presence of grey (and greyness) is not the consequence of a pure aesthetic, but the embodiment of the alienated greyscale of the technological twilight of humanity, in which extra-terrestrial visitors (the “Grey ones”) and the melancholy of geological consciousness come together in a vision of ruins and desert.
According to the art historian Beat Wyss, one of the current tasks of art thinking is to reach behind the “silence” of modernity in order to lay bare the iconography of the invisible – to discover and activate the repressed ideologies of pure sensitivity. Judging by the works that make up the Inverse exhibition, the youngest generation has stopped representing the conventions of geometric abstraction, and now rather uses and exploits them in a critical way. At the same time, what we have here is not merely about the loss of (illusions of) purity, but about the transformation of pure sensitivity into contextual sensitivity, into an approach that attempts to uncover the delicate structure of tensions between the visible and the invisible, without escapism, and doing so, if not in the interest of “reality”, then in the interest of life.