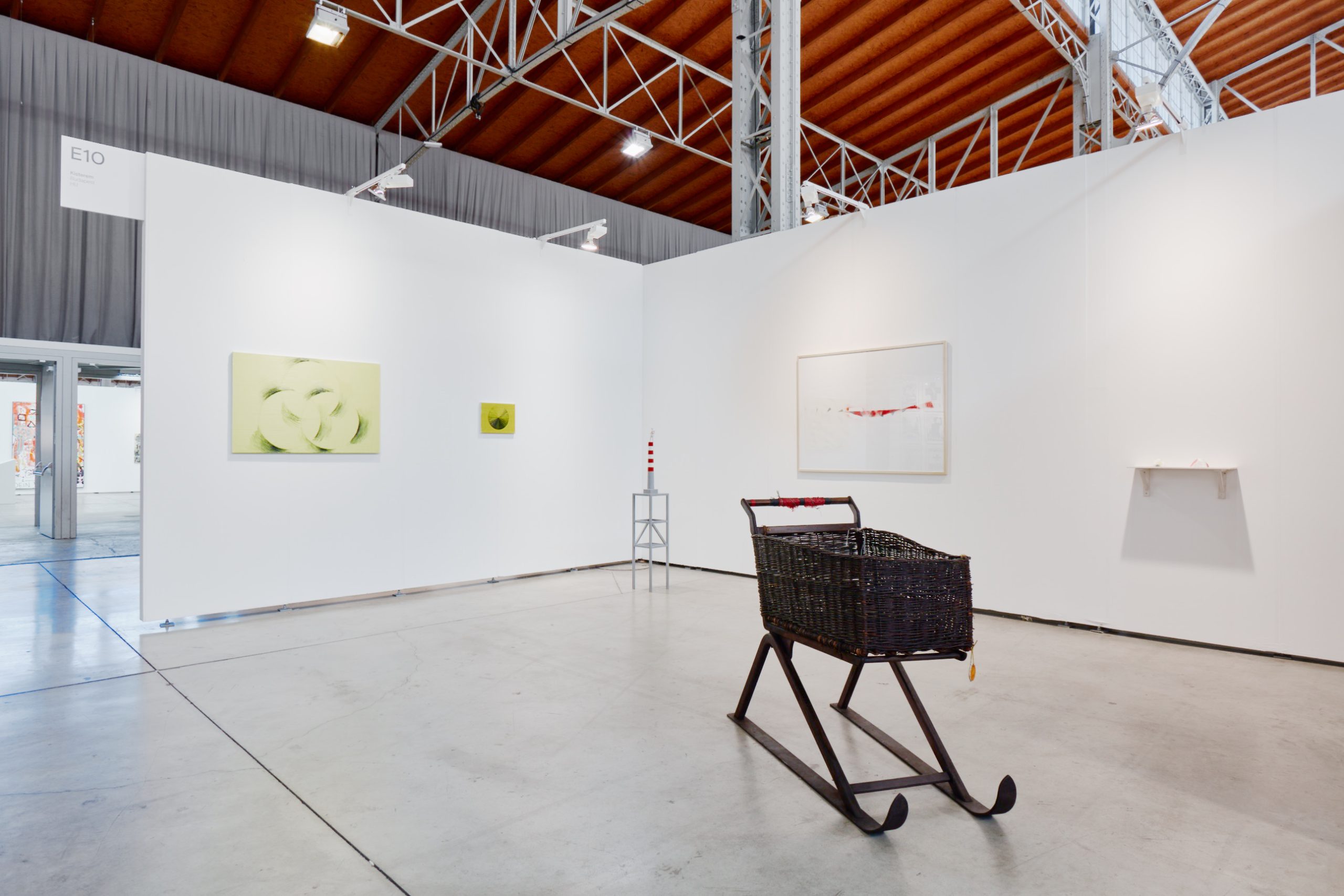 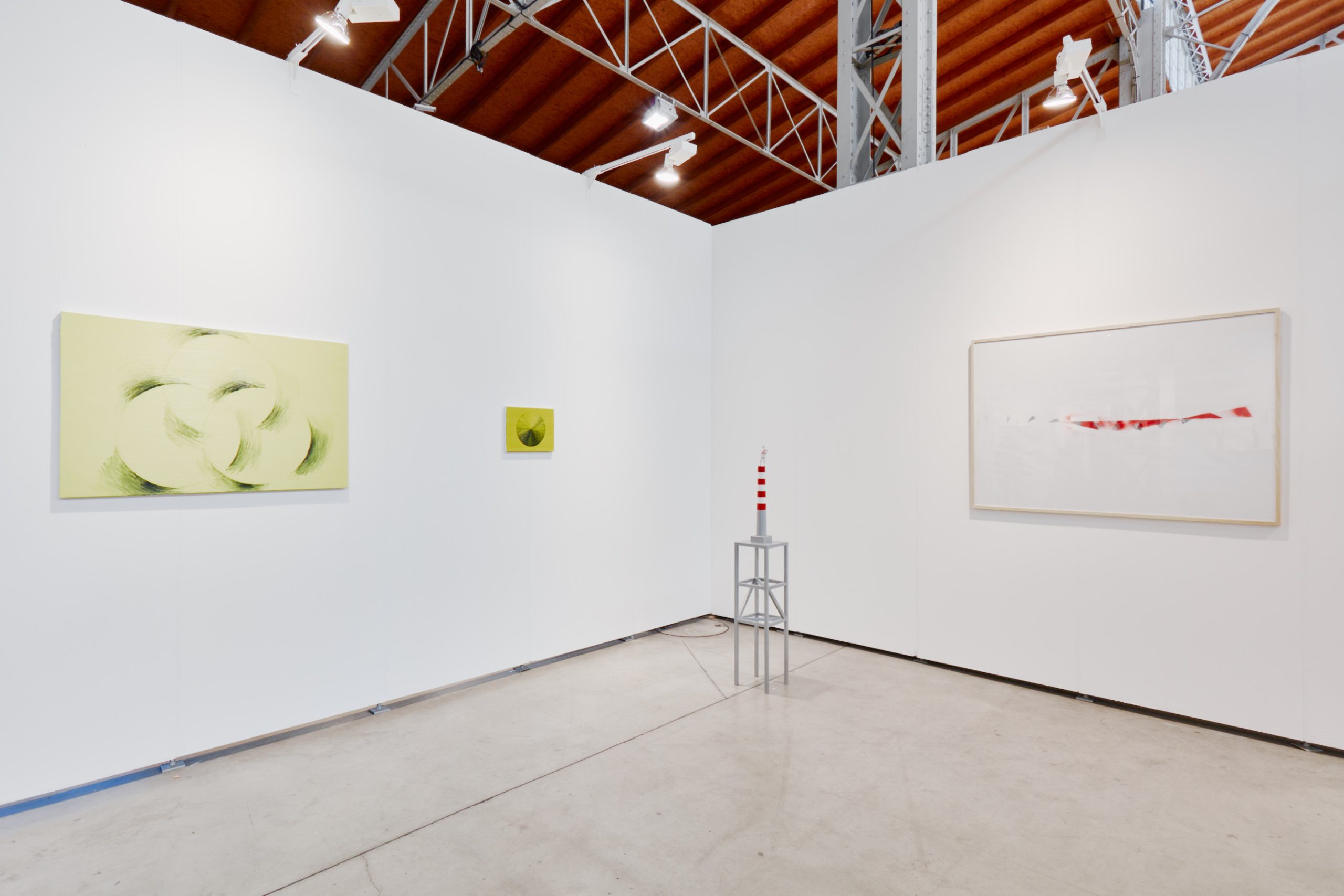 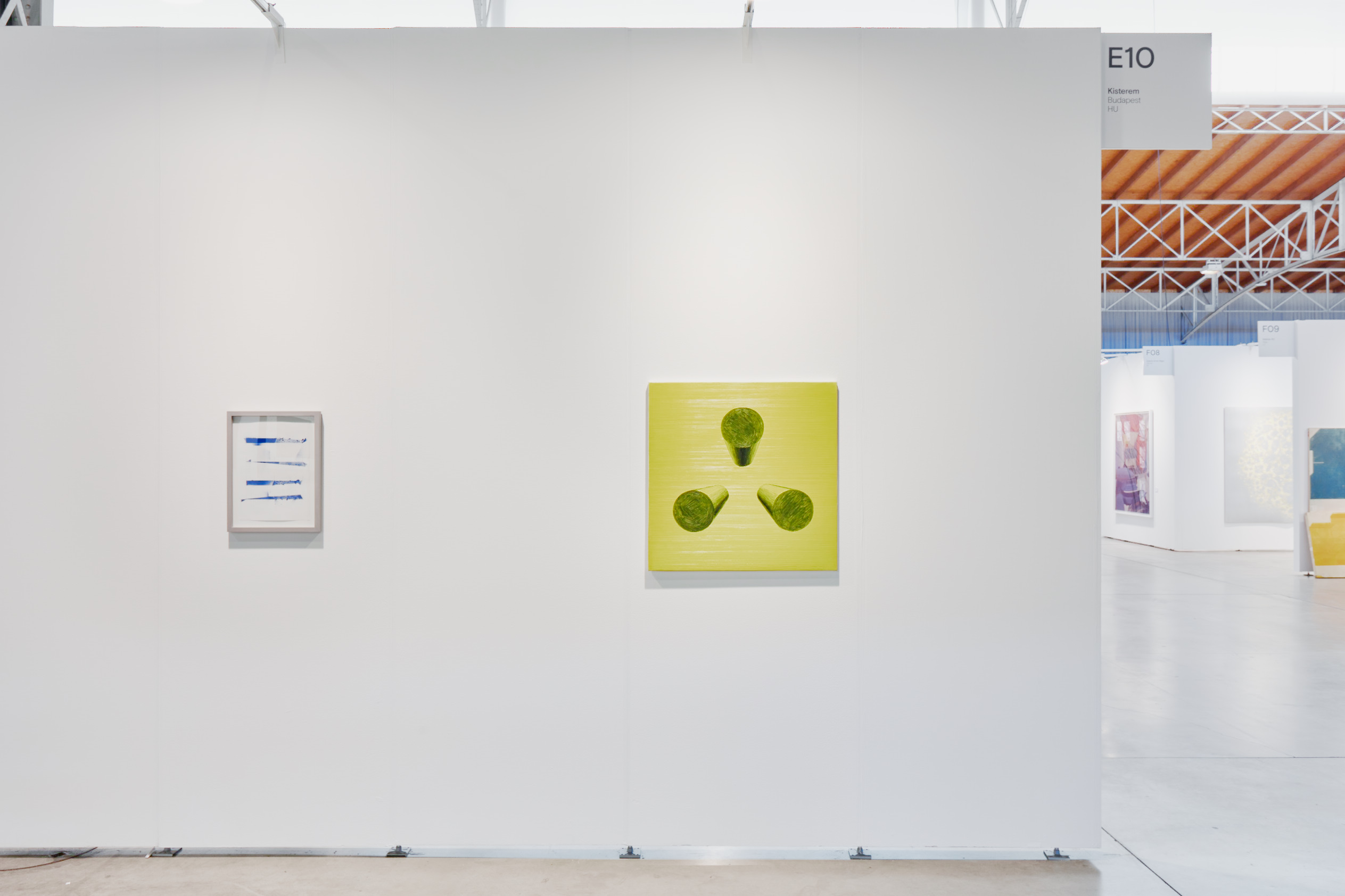 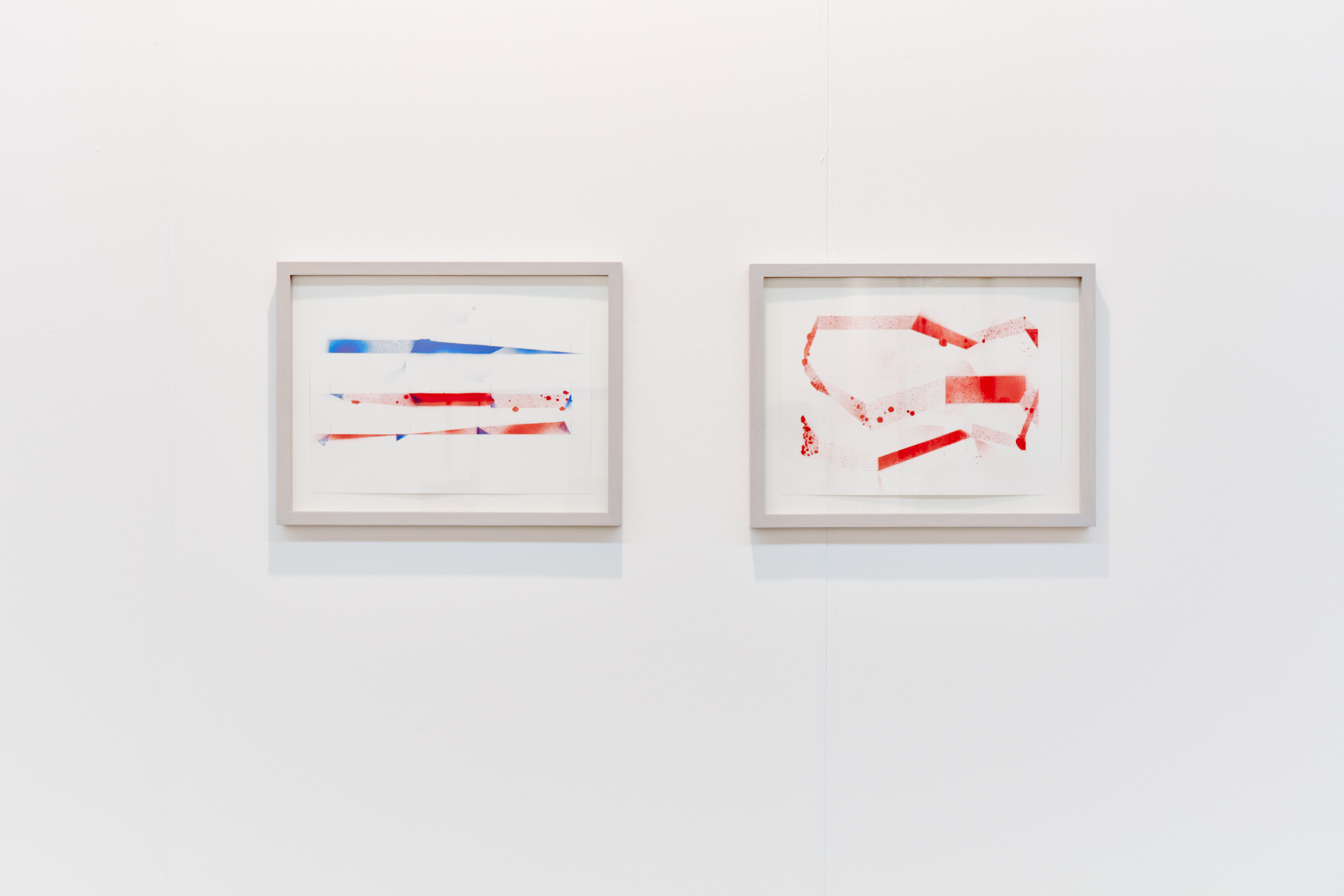 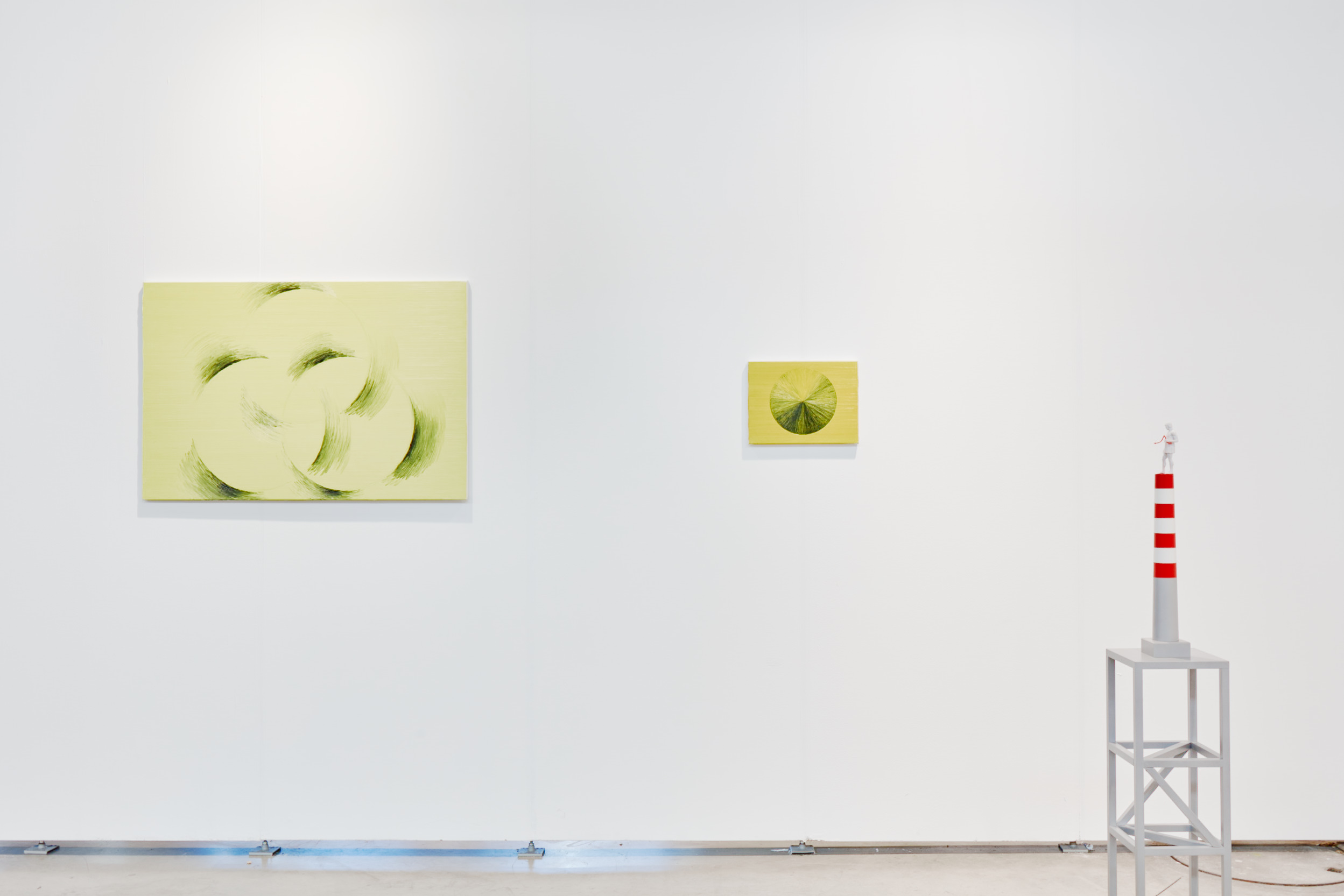 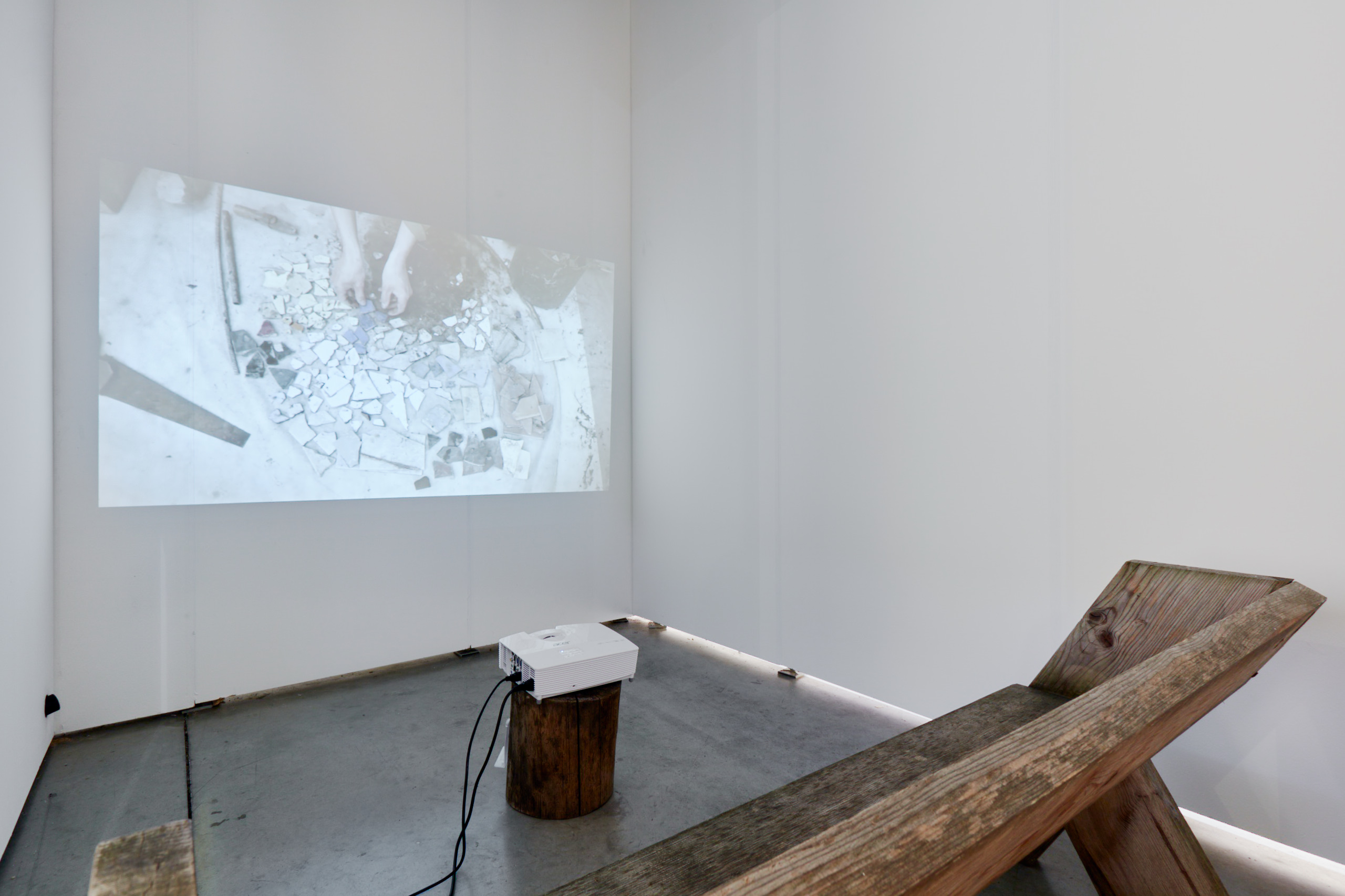 The artworks, displayed at the booth of Kisterem, can be interpreted within the framework of the Anthropocene, the latest geological period in which human impact on nature has reached a critical point. Some of the exhibited works expressively reflect on urgent ecological issues, trying the weight of responsibility and possibilities of humanity.

Kitti Gosztola raised an ironic monument to Vulcanus, the ancient roman god of fire with a flagged diagram in his hand, representing the world’s fossil fuel production. Gosztola’s works regularly point out interventions to the ecosystem driven by questionable political or ideological motives. Gosztola is an emerging artist of the young generation whose first institutional solo show is now on view until mid-October in her hometown, Székesfehérvár (Ruminatio, Szent István Király Múzeum).

Works by Tamás Kaszás are often related to a fictional scenario which forecasts an economical, ecological and technological collapse we might face in the future. Future-ex (accompanied by a video) is an object for transportation related to the so called cargo cults which were syncretic religious movements, developed in the 19th century predominantly on the islands of the Pacific Ocean. As anthropologists noted aboriginal tribes reconstructed some elements of their colonizers’ culture in order to contact their god, so they could get similar packages arriving on airplanes and cargo ships. Recreated structures were conceived mainly as tools for the gods to send gifts to the people. Kaszás takes up these ideas to create prototypes of simple and basic tools for the future, which simultaneously serve functional, mythical, symbolic and aesthetic purposes. The tools are bearers of residual memories of the previous civilization, which future societies will process according to their own needs. Earlier this year along the idea of an alternative future for humanity, Tamás Kaszás presented his works simultaneously at De Appel (Amsterdam, Netherlands) and Netwerk Aalst (Aalst, Belgium). His solo show Sci Fi Agit Prop was accompanied by a series of events focusing on the diverse urban contexts of the two institutions.

The artist duo Little Warsaw (András Gálik and Bálint Havas) is working together for almost 20 years by now. Little Warsaw’s work has been widely exhibited internationally, their projects have been included for instance in the 2nd Berlin Biennale, in the 50th Venice Biennale and in Manifesta 7 in Roverto. Research work focusing on the past is an immanent part of their artistic practice. It often means the recontextualization of a certain motif of the collective historical past by alienating it from its original time and space. Re-function (2009) is an aluminium rim of a car cut half and while the one part kept consistent and put on display in a continuous relation with the other one part which has been processed to cast of its material content a ‘standard’ brick to represent the pure material without its previously industrially given form.

(2015-2016). These drawings, which feature the artist’s customary purified forms and follow her signature compositional principles, are her reflections on the acutely topical issues and traumas of the migrant situation in Europe. This series marks a departure from Vécsei’s previous subjects, which were conspicuously devoid of a socially critical edge, for she now raises questions concerning the moral responsibility of the individual and of society.

Katalin Káldi’s high-coloured monochrome paintings are transmitting strength and dynamics with a hint of warning. Although the forceful yellow palette of her latest paintings marks a striking departure from her previous, more placid canvases, the emphasis remains on the sense of order that characterises all of her works, and on the interrelationship between the different elements. The powerful dynamism projected by the yellow regular three-dimensional bodies engenders a feeling of intentionality. The momentum of the shapes leads us to associate the cylinders with bullets and the swirls of interconnected circles with some kind of energy or radiation. On Káldi’s recent works all the elements and brushstrokes tend towards a certain point, “the absolute”, which is eventually the way to countervail chaos, we are surrounded by.