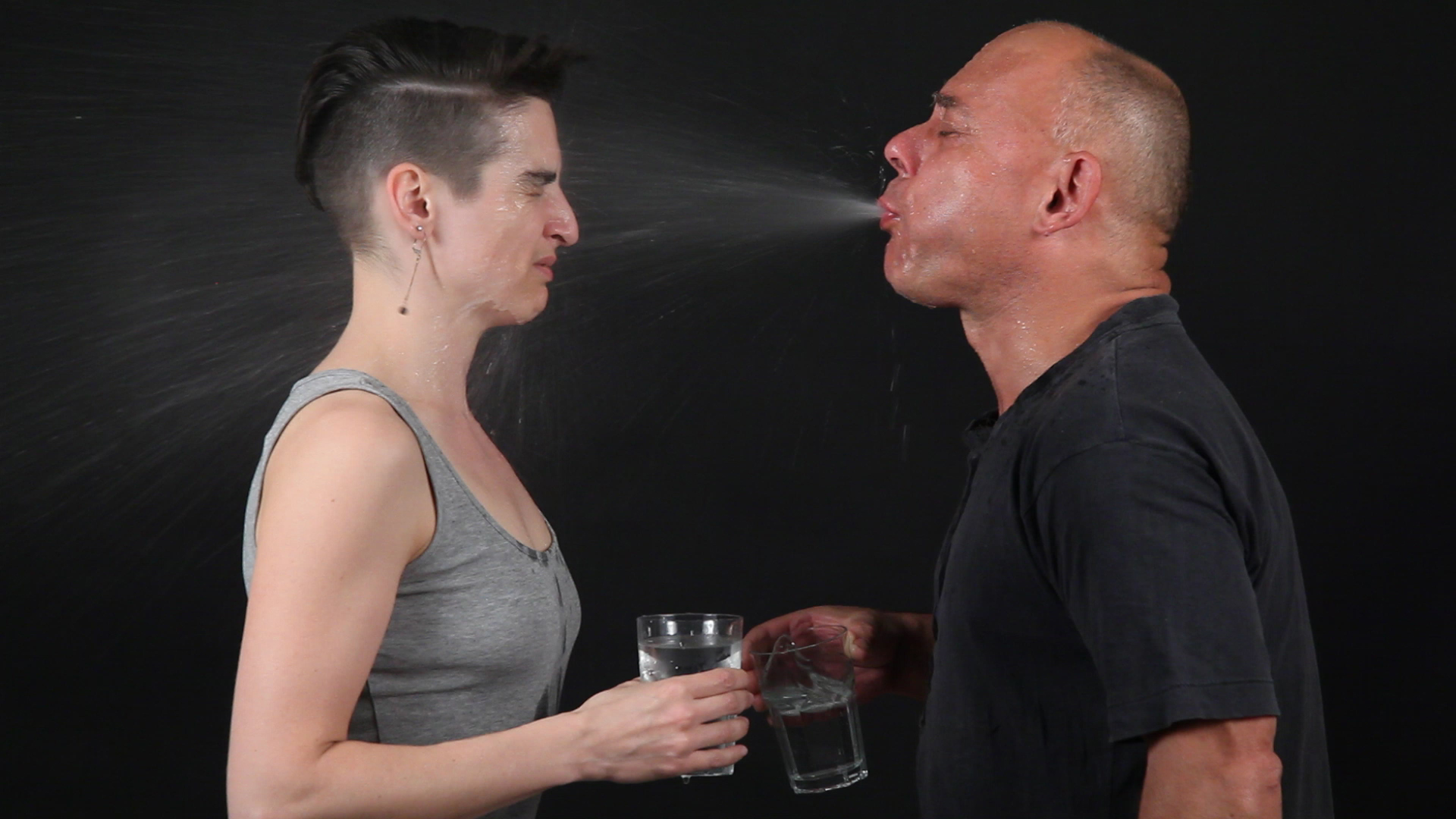 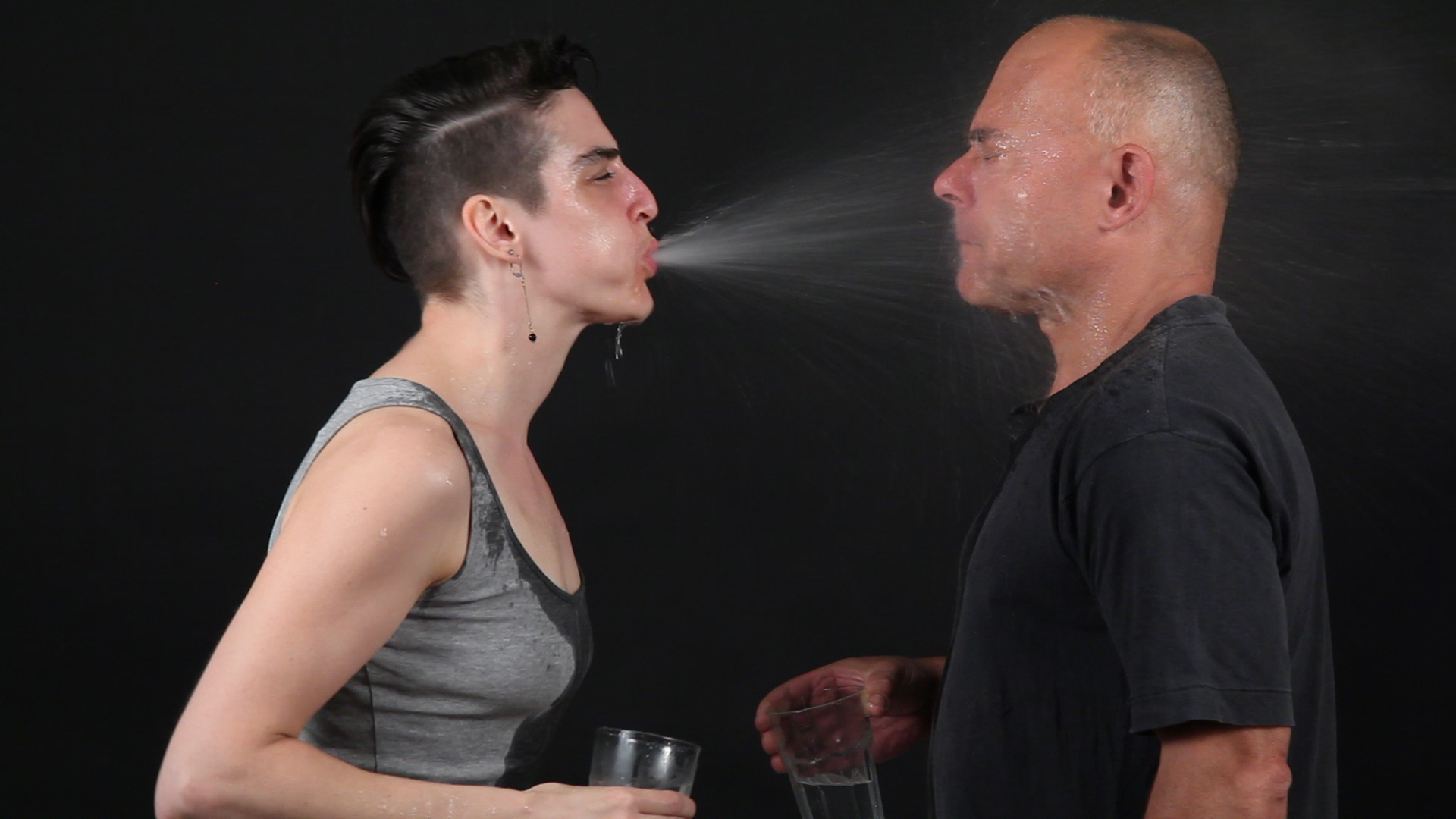 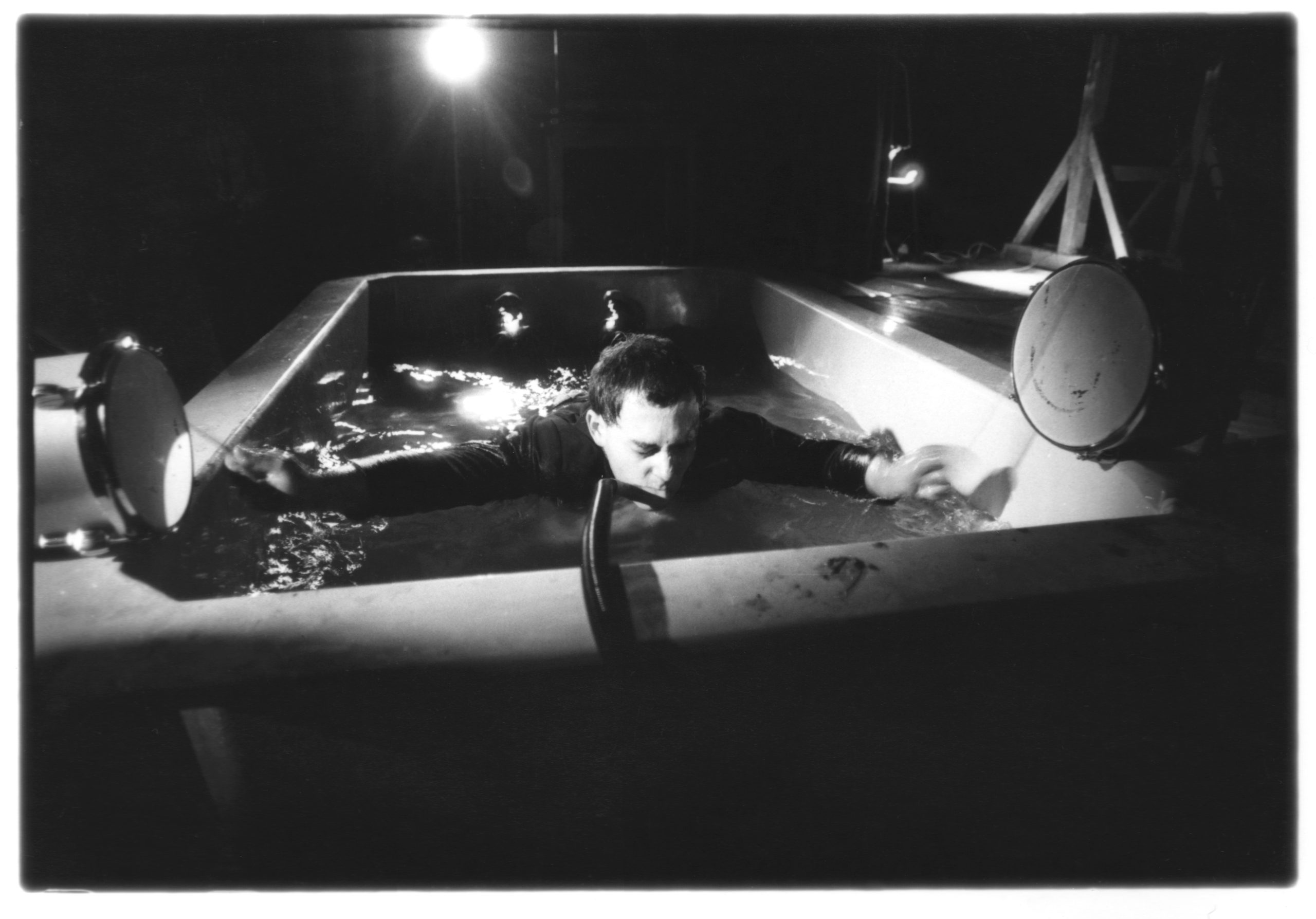 The fundamental element of Szirtes’s performances is corporeal experience with attention towards the relation between the body and objects used as its prosthetics (bear claws, fox head, requisites of previous shows, a pine tree symbolizing the North and a Persian rug the East, etc.) and towards bodily processes – shown by the motif of wetting oneself in his 1986-87 performances. The starting point of his early performances can be found in the traditions of risk-taking body art, which in Hungary was hallmarked by the radical art of Tibor Hajas at the end of the 1970s. The recurring use of broken glass, that can be interpreted as an acoustic element (Freestyle swimming, 1984) and a means of endangering the performer’s body (Göbzi I-IV., 1985); hanging the performer from a piano during the concerts of Hymnus or an exhibition space, between torches as in Echo (1985) – they all reference the same artistic attitude. Equally key elements are the acoustic potentials and the closely related rhythmic, even monotone movement forms of performance that play central roles in both the solo and group performances of Szirtes. Already in the case of Passing Nausea (1981), his first monumental performance, acoustic elements based on the bouncing of a ping-pong ball structured the show, thanks to the contribution of the 180 group and their founder, musician-media artist Tibor Szemző who acquired international acclaim in the mediation of contemporary classical music. It was Szemző who later devised the musical background of Szirtes’s performances and New Modern Acrobatics. Audio effects recorded and replayed on the spot by microphones attached to props and machines (sewing machines and later fridges) and sounds, songs and inarticulate, rhythmic noises created by the performer were all used. By layering the different acoustic layers Szemző created a continuous musical texture. These acoustic experiments – among them pieces that reflect on contemporary high&low practices as Lady Carneval I-II from 1979, an absurd reinterpretation of Karel Gott’s (the most successful male singer in the former Czechoslovakia) hit – are then sometimes come in conflict with a concentrated, risk-taking attitude, as in Plant (1983). Szirtes was breathing from underground with the help of an air pipe with a microphone attached and Szemző created a bizarre collage using the produced sounds. The amplified air pipe also played a central role in the Danish performance of Vikings are tame (created together with artists Lóránt Méhes and János Vető) and in Freestyle Swimming and Wonder Stag, both presented here. The pressure difference caused by the air pipes made it difficult, even prevented total submersion, thus accompanying the performer’s struggle with the elements with dramatic sound effects.

Akin to the tendencies of individual mythologies at the time, biographic elements played a prominent role among the arsenal of motifs in Szirtes’s early performances, as it is most notable in Passing nausea, a performance that processed his own serious illness, or Sstrong Jánoss I-II. (1982) which was centered around the struggles of rebirth. The painted butterfly wings of the latter, similarly to the heart motifs in Vikings are tame, shed light on the relationship between performance and new wave painting. Following this period, the ritual, archaic aspects of the performative genre became more central, through which the relationship of myth or legend and performance and the shamanistic role of the performer are thematized. Of the performances presented here, Wonder Stag and Avanti reflect on these questions. ‘Prehistoric’ or ‘tribal’ themes that appear in these works are elements that bring paintings, graphics and performances created at the time on the same platform.

From the mid-1980s the stylistic language of Szirtes’s performances is defined by the transformation of early motifs and medial plurality, that, according to the approach of postmodern, puts all of the above between quotation marks.