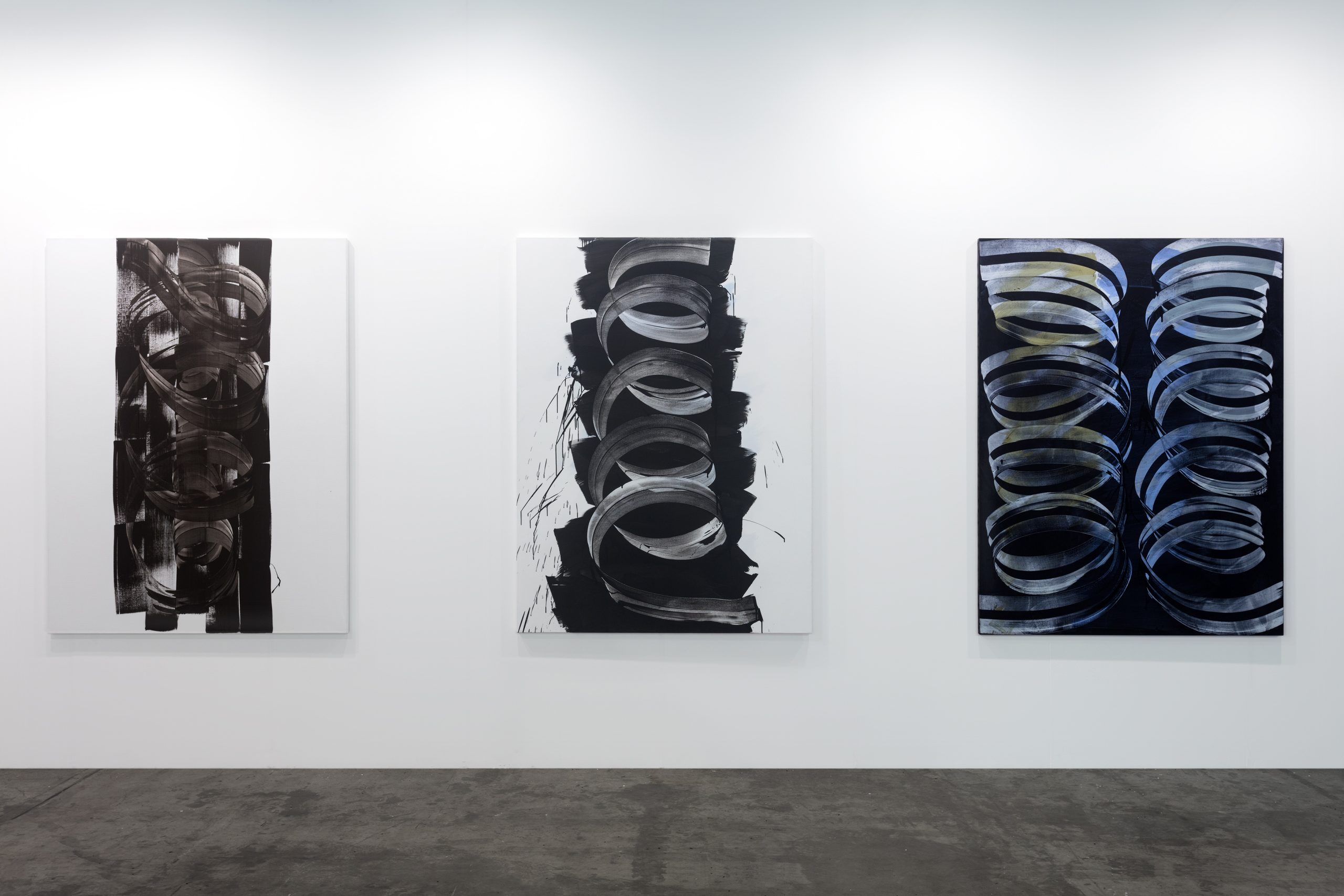 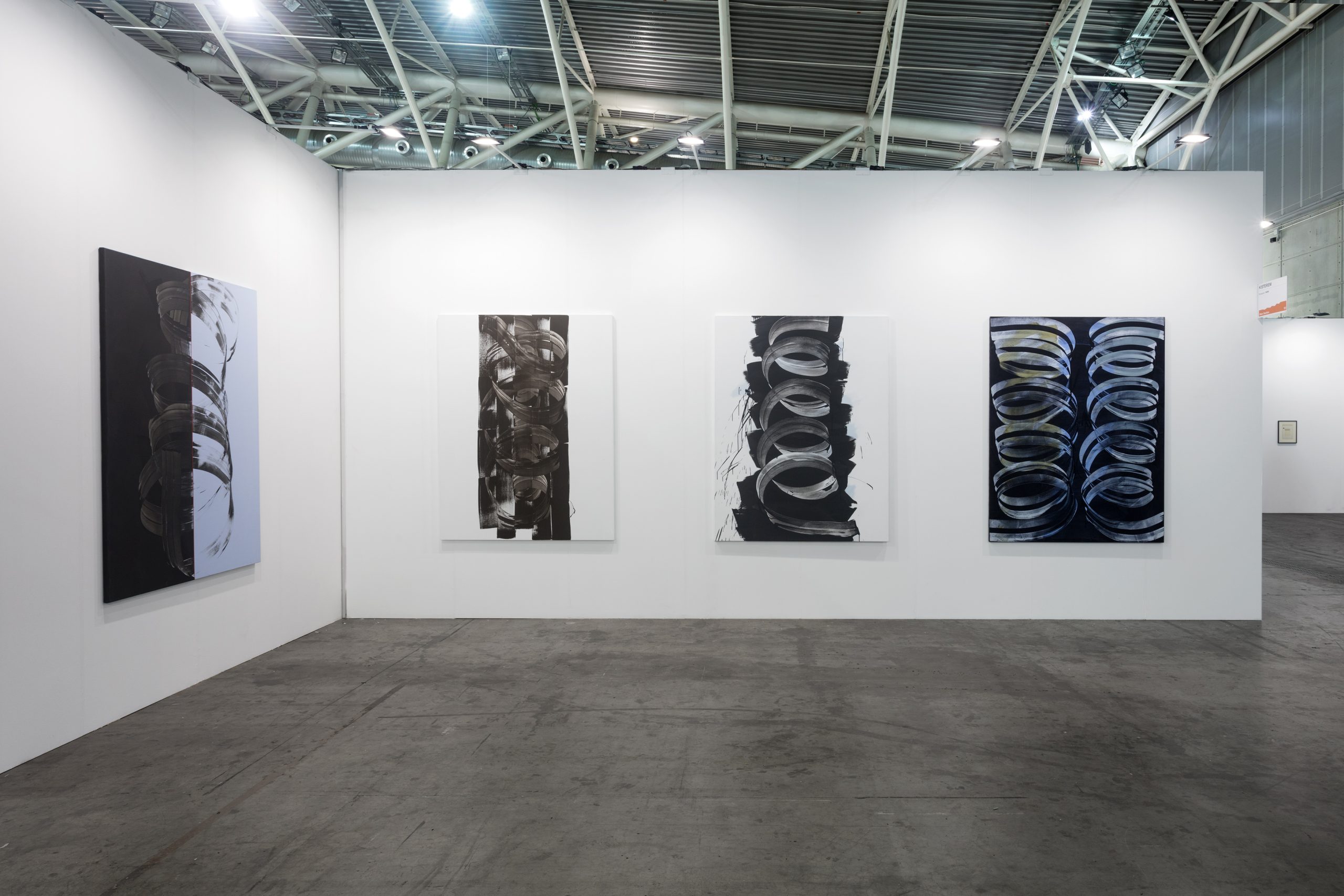 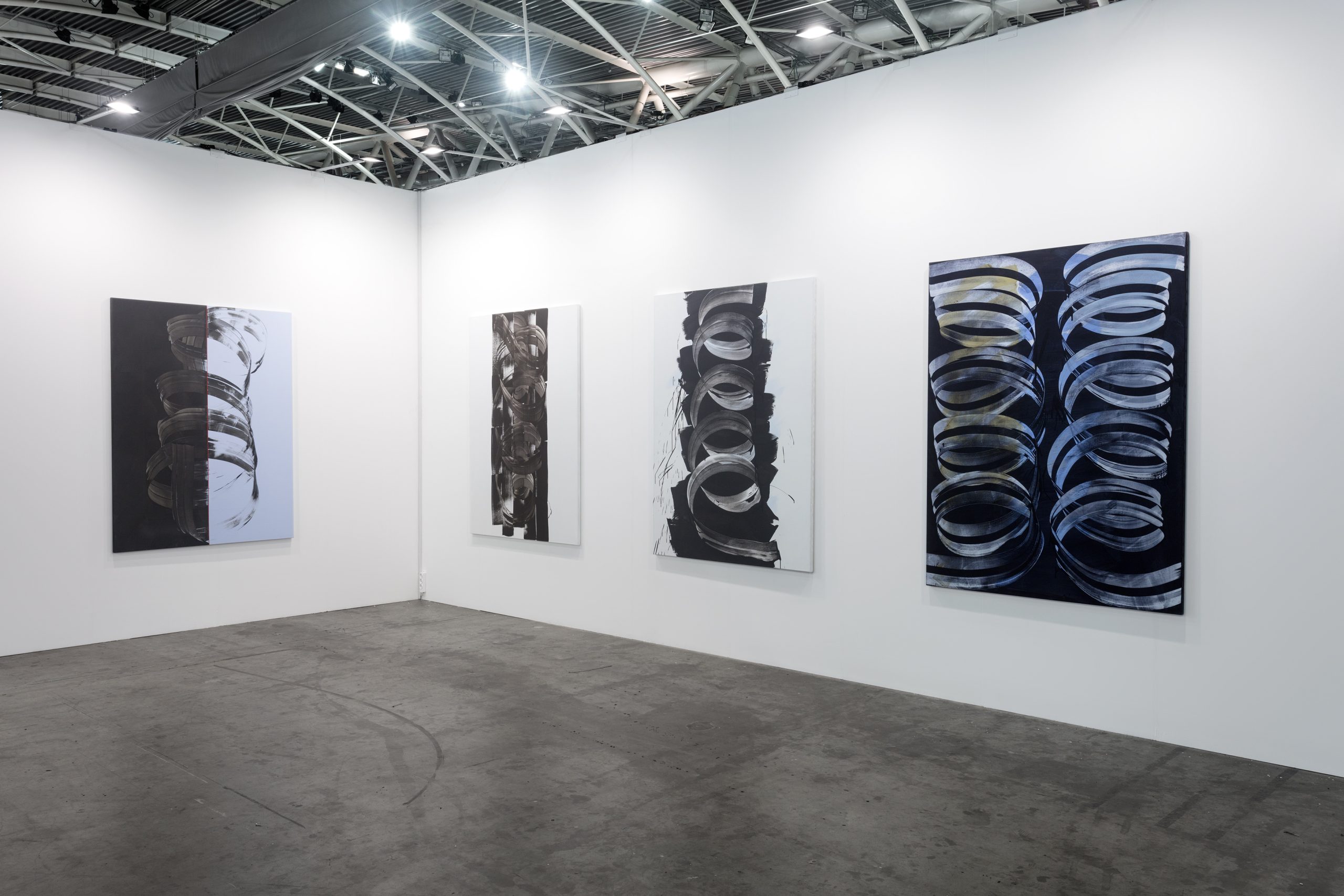 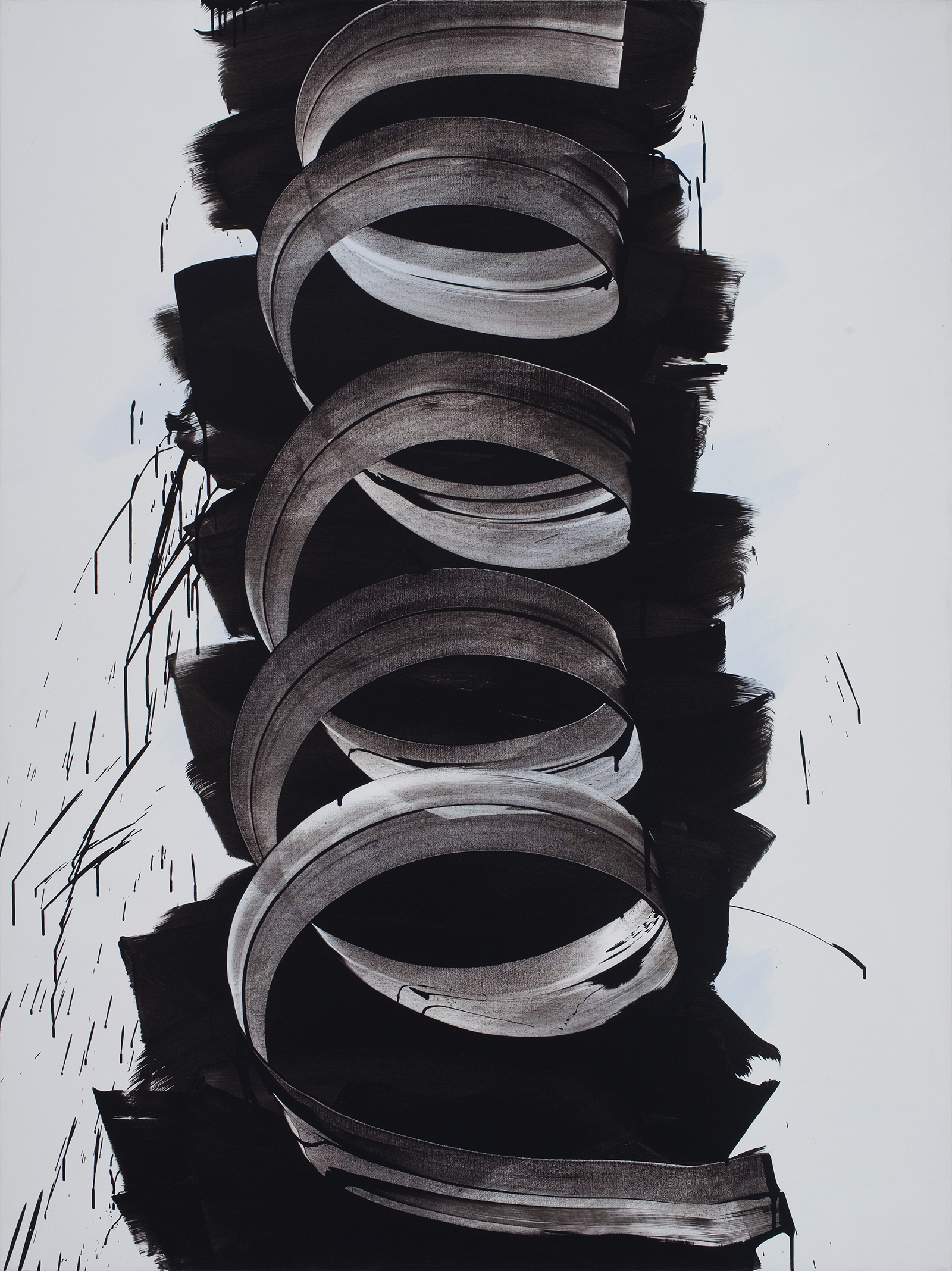 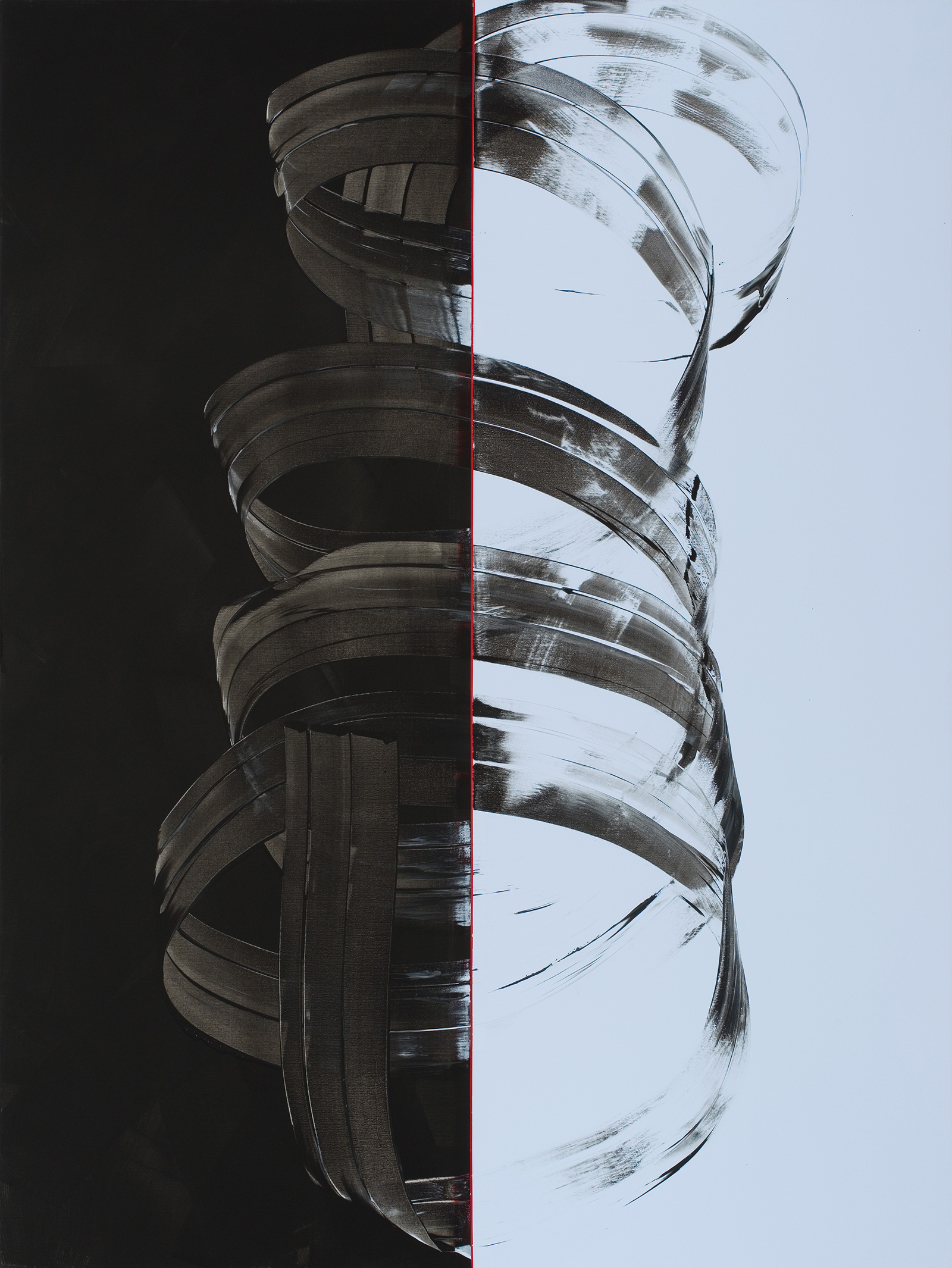 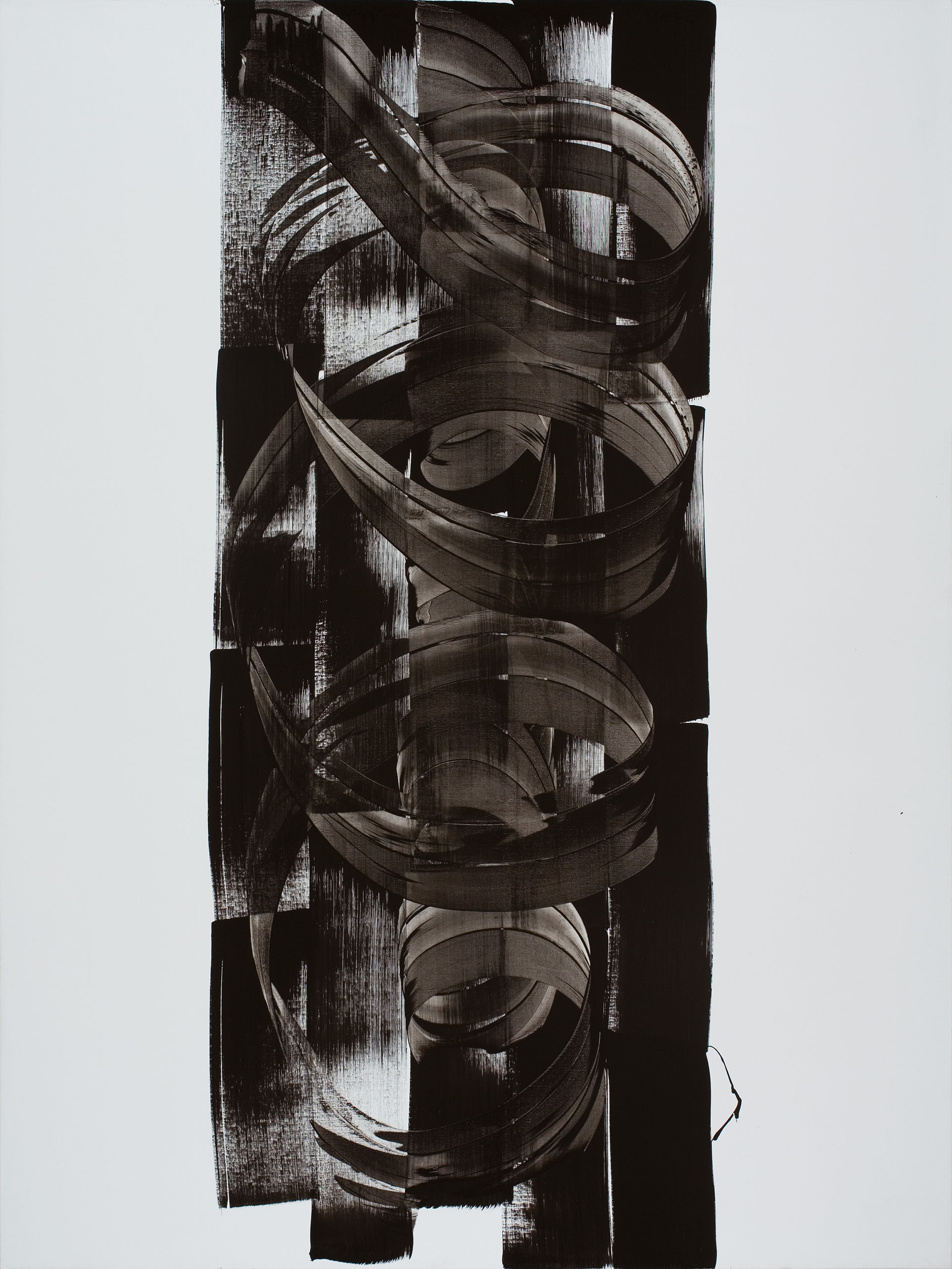 Images of Dynamic Equilibrium
On the spiral motifs of István Nádler

What István Nádler looks for in his art is dynamic equilibrium, a harmony that reconciles opposites without eliminating them. In the 1960s and 1970s he was among the foremost Eastern European exponents of geometric abstraction and hard-edge painting, who turned in the early 1980s towards more expressive configurations of form, upholding the traditions of art informel and the historical avant-garde while simultaneously reflecting further upon them. Nádler’s painting since the 1990s is conveyed in a formal language that embraces both gesture and geometry: rather than counterposing each other, these two qualities combine as complements. Nádler’s paintings are meditative objects, unearthing events in which diametric opposites balance each other out, as “pages” of an imaginary diary (with titles that often refer to their place of creation), or as “phase images” of his creative evolution.

Visible and invisible, transcendence and immanence, objectivity and non-objectivity, light and dark, warm and cold tones, up and down: these are the opposites that Nádler brings together, deploying ever newer motifs that seem to hover in the centre of his images. The first such motif appeared in an early work, painted in 1963: out of expressive patches of colour, the figure of the Winged Victory of Samothrace emerged, twisting in space – Nike’s wings stretched wide between earth and sky, between the edges of the picture plane, as a transition between above and below, a metaphor for a dynamic equilibrium. Similarly stretched out between the edges of the picture plane were his hard-edge petal motifs, which also referenced the systems of motifs used in folk art (Petal Motif Nr. 1-2, 1968). Later came his curved forms (Tension, 1970), his Twisted Diagonals (1972) and his Plastic Diagonals (1974), which were subsequently transformed into the figures of Disclosed Departure [KSJ1] (1976), the key motifs of what the artist’s monographer, Lóránd Hegyi, aptly described as “emotional geometry”. A further shape hovering in imaginary space and simultaneously resolving and preserving contradictions arrived in Nádler’s art in 1984 in the form of a yellow parallelogram, recalling the iconic Suprematist painting of Kazimir Malevich: a picture plane twisted in space, dissolving and disappearing into the white surface, interpretable also as a unique intermediary and transition between the visible and the invisible, the transcendent and the immanent. The foreshortening dynamic shape, at times becoming an expressive gesture, was placed in a similar way to the figure of Nike of Samothrace – floating between above and below, between the visible and the invisible, between the tangible and the elusive, blurring the boundaries between gesture and geometry.

In the 2010s Nádler hit upon a new central motif: the spiral form dominating the centre of metaphysical picture spaces, which, like the biblical pillars of smoke and fire or a whirling vortex cast by the forces of nature, mediates between up and down, within and without, as an imaginary clustering of energy. Nádler’s paintings are governed by the contrast of light and dark, which is overwritten by the illusionistically foreshortening spiral form, suggesting complex spatiality, creating a connection between the mutually counterposing picture fields, planes, and patches of colour.

The spiral form, visualising the motor hand movements as a kind of store of energy, projects at times out of the dark picture field into the light, from one sphere into the other (Feketebács[KSJ2]  9, 2014 [The title is the name of a village[KSJ3] .]), while at other times it is revealed by drawing back (wiping back) the black surface inscribed on the white surface, allowing the lightness of the picture ground to show through (Feketebács 3, 2014). In other instances, it barely emerges from the maelstrom of the dark surface, and the vertical movement in the centre of the vortex is only just perceptible (Feketebács 11, 2014), while elsewhere the spiral is written across vertical gestures (Feketebács 7, 2014) or is doubled (Feketebács 5, 2014), hovering “in front of” the ethereally fine, veil-like, vertical gestures in the centre of the image.

The occasionally calligraphically charactered spiral forms belong among the key motifs in Nádler’s soaringly ethereal, emotionally charged, geometric informel: they relate simultaneously to the artist’s earlier toolbox of forms from his earlier paintings (the figure of Nike, the petal motifs, the twisted and plastic diagonals, and the parallelograms hovering in space), and to the history of abstraction (from Suprematism to art informel, from the colour field painting of Barnett Newman to the gesture painting of Pierre Soulages), whilst enduringly remaining metaphors of the dynamic equilibrium that is Nádler’s creation.